Does populism, masked as welfare measures, pay politicians back at election time?

This question looms large even as the bitter bouts of electioneering wound down, and the stage is set for 2.8 crore people to cast their vote in the election to the 119-seat Telangana legislative Assembly on December 7.

Incumbent caretaker Chief Minister K Chandrasekhar Rao (KCR) is betting on the sop-saturation strategy, offering benefits of at least three of several schemes for the disadvantaged to each family, having called for eight months in advance on September 6.

Others have relied on this saturation strategy with striking success, notably AIADMK’s J Jayalalithaa in Tamil Nadu, and in Telugu society the late Congress Chief Minister YS Rajasekhara Reddy, to ensure a second term in a row in the run up to the 2009 polls.

KCR’s goal is that and more — enabling son KT Rama Rao to slip into the saddle, thereafter, is also in store.

But a Machiavellian move by Andhra Pradesh CM N Chandrababu Naidu threw a spanner in the TRS works. 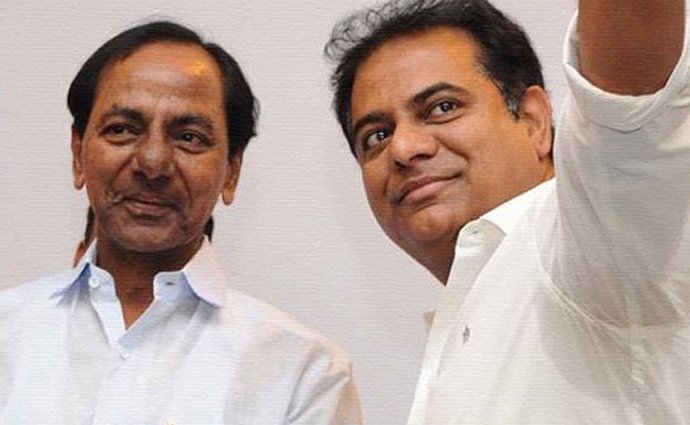 His Telugu Desam Party (TDP) joined hands with Congress, abandoning the founding of the regional party by his father-in-law NT Rama Rao in vehement opposition to Congress, and brought on board the fledgling Telangana Jana Samithi, a breakaway group of those disenchanted with the TRS and the Communist Party of India to form the Praja Kutami or People’s Front, challenging KCR.

Naidu readily agreed to play second fiddle to the Congress in the race for 94 seats, leaving 25 for its allies.

The People’s Front followed up on this by altering the narrative of the campaign from KCR to carrying forward the unfinished tasks in the agenda for a Bangaru Telangana to that of a no-holds-barred battle between the KCR family on one side and the people of Telangana on the other.

With that the TRS chief lost the early mover advantage in advancing the elections to catch his rivals unprepared.

Clearly, the political realignment and emergence of a new social coalition with the Congress, where the Reddy caste cohort is the major influence in Telangana, and the TDP, dominated by the Kamma caste, rattled KCR.

Their 2014 election vote shares combined with that of the TJS, which would chip away at the TRS support base, and that of the CPI and of the YSR Congress, back in the Congress fold since the 2014 poll, made his rivals a formidable alliance.

Such political arithmetic does not always transform as electoral chemistry in a subsequent election.

Yet, it made KCR jittery when a fleeting visit of Sonia Gandhi to address just one rally at Medchal, on the outskirts of Hyderabad, on November 23, drew traction for the People’s Front.

She made an appeal based on her contribution to grant Telangana separate statehood, and the betrayal by KCR and TRS.

The four-party alliance stepped up the campaign, by following up on the Sonia appeal with their leaders, addressing rallies across the state even as a chargesheet against the perceived wrongdoings of the KCR government and a Common Minimum Programme of the People’s Front was made public.

The campaign that ensued, for the final fortnight before polling, made both sides tweak strategies.

“The TRS perhaps underestimated the capacity of the four party alliance to galvanise public opinion against it. Knee-jerk reactions about abdication of politics by KCR and resting in the farmhouse is a sign of fatigue,” said Professor Ramabrahmam Ivaturi of the University of Hyderabad.

A seemingly unfazed KCR has claimed at meeting after meeting that TRS will get a 100 of the 119 seats. This has prompted gamblers to join the People’s Front in the race, wondering on how close, or far, KCR will be from the coveted century on December 11.

Also Read: TRS must realise, Telangana belongs to the people - it is nobody’s jagir