The TRS needs to present a new vision and long-term solutions to agrarian distress, unemployment and Hyderabad-centric development.

Kalvakuntla Chandrashekar Rao’s (KCR) sweeping victory in Telangana shows that the Telangana Rashtra Samithi (TRS) chief has defeated the Congress at its own game of welfare populism.

The declaration of the results of the state elections saw TRS ride back to power with 88 seats in the 119-member Telangana Assembly. Belying predictions of a close contest, chief minister KCR’s party improved upon its performance of the 2014 Assembly election by 25 seats — from 63 to 88.

With a vote share of 47 per cent, the party unarguably secured the support of a wide section of the electorate.  The Opposition’s Prajakutami, or People’s Front, a coalition that saw old rivals – the Congress and the Telugu Desam Party (TDP) – was reduced to a mere 21 seats.

The Congress party’s alliance with the TDP, Telangana Jana Samiti (TJS), and the Communist Party of India (CPI) failed to translate into votes as their combined vote share fell to 32 per cent from an expected 38 per cent votes.

The coalition’s failure has once again raised questions on the Congress’ ability to forge alliances with regional parties and present a united challenge to BJP in the run up to the 2019 Lok Sabha elections. 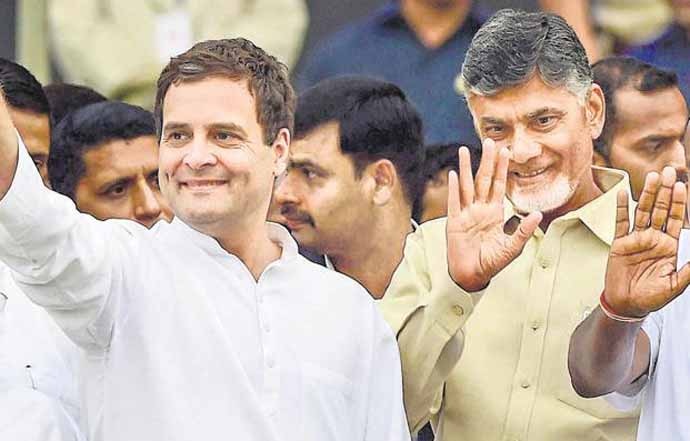 The coalition failed to impress in Telangana. (Source: PTI)

The TRS’ sweep shows that the party was successful in converting the election into a referendum on KCR’s leadership. The TRS campaign slogan ‘Phir Ek Bar KCR’ (KCR once more) found resonance with wide sections of the electorate reposing trust and credibility in the CM.

The TRS’ KCR- centered campaign helped the party overcome anti-incumbency against a number of MLAs. The TRS campaign also succeeded in presenting the government as one working for the welfare of all sections of the society, especially for the farmers, women and rural constituencies.

In this regard, the investment support for farmers under the Raythu Bandhu scheme, increased pensions and the Kalyana Laxmi – Shaadi Mubarak scheme proved to be especially popular among the voters. The TRS was able to make up for the incomplete 2 BHK housing scheme by promising to complete the scheme in the future.

An increased voter turnout in the rural constituencies further helped the TRS convert support for welfare policies into votes. The party’s irrigation projects Mission Bagiratha and Mission Kakatiya also received support, even as its benefits have not reached southern regions of the state. Relying on KCR’s leadership and a please-all manifesto, the TRS was able to determine the electoral issues and occupy the symbolic centre stage in these elections.

The Congress’ failure to align itself with the widespread imagination of ‘Telangana sentiment’ was its single biggest failure in these elections. The Congress’ alliance with the TDP further conceded this space to the TRS.

TRS’ thumping victory brings out the continuing role of a leader-centered political culture and reliance on welfare as was the case in the former state of Andhra Pradesh.

The one-sided contest in 2018 is arguably a continuation of decisive mandates delivered by the electorate beginning with the TDP’s massive election victory in 1994.

Following its re-election in 1999, the TDP lost power when the electorate decisively swung towards the Congress in 2004. The TRS’ victory can also be seen as part of a continuing electoral cycle with incumbent governments being re-elected to power at the end of their first term.

With CMs remaining at the helm for over 10 years, the former state of AP witnessed highly centralised and leader-oriented government functioning. Beginning in 1994, N Chandrababu Naidu sought to combine neoliberal economic reforms with a personal image of a ‘CEO politician’. Following Naidu’s defeat in 2004, Congress CM YS Rajasekhara Reddy developed a strongman leadership style. KCR has already entrenched a larger-than-life leadership style and micro-management of institutions which was earlier associated with TDP and Congress rule in united AP.

The irony is that KCR is replicating a political culture of patronage and strong-fisted approach to the Opposition, which led to the movement for a separate Telangana most intensely since 2001.

The KCR government has come down heavily on protesting students and shut down the Dharna Chowk in Hyderabad. A KCR-centric campaign and region-based polarisation has flattened the terrain of electoral contest leaving vulnerable sections of the electorate without any effective representation.

The one group which has benefited least from the TRS rule has been the unemployed youth whose demands for government recruitment remain largely ignored.

In the run up to the elections, Osmania University witnessed massive protests against the government. More than the absence of anti-incumbency, there was a perceived lack of democratic choice for the youth. Students protesting at Osmania University. (Source: Twitter/Photo for representation only)

This may have resulted in low voter turnout in urban areas with Hyderabad city seeing a lowest ever turnout of 49 per cent.

Second, the government remained unresponsive to the plight of tenant and landless farmers who remain ineligible for the Raythu Bandhu scheme. A large number of small farmers also sought an upper limit to the scheme, which has largely benefited large landowners. Telangana has seen more than 4,000 farmer suicides most of whom are landless farmers. However, they remain outside the government’s Raythu Bima ex gratia scheme.

The dalits, girijans and adivasis have not significantly benefited in the new state. The Opposition’s failure to tap into an undercurrent of dissatisfaction with the TRS has meant that electoral competition has grown increasingly distant from popular demands. Over 4,000 farmers have killed themselves in Telangana. (Source: Wikimedia Commons)

Two factors explain this: First, Opposition MLAs have preferred to side with the TRS in the absence of any strong alternative. Second, civil society organisations such as the Telangana Joint Action Committee (TJAC) have failed to convert their outfit into successful political parties.

The Assembly elections in Telangana bring to fore the specific regional dynamics in the new state. While the TRS has supported the BJP-led central government in the past, relations with the Centre did not figure prominently in the election campaign.

The election results show the marginal role of national parties with the BJP managing only one seat. However, KCR may not be able to invoke ‘Telangana pride’ as easily when contesting the general elections where the equation between regional and national parties is reversed.

Will KCR succeed in rallying voters behind a non-Congress, non-BJP federal front given his reliance on inter-state rivalry to win the Assembly elections? The TRS chief is yet to give a positive and concrete shape to his idea by linking the federal front with Telangana’s regional aspirations.

The TRS’ landslide mandate has further heightened the people’s expectations from the party and will test KCR’s model of welfare populism. With the state accumulating debts of Rs 2.2 lakh crore, the government will have to raise new sources of revenue to continue its welfare schemes.

Will KCR be able to carve a separate niche for himself even as he replicates a strategy of welfare populism perfected by former Congress governments?

The TRS needs to present a new vision and long-term solutions to agrarian distress, unemployment and Hyderabad-centric development. Without this, KCR may well find his political support in Telangana to be more volatile and ephemeral than he would like as he prepares for a role in national politics.

#Chandrababu Naidu, #Assembly election results, #KCR, #Telangana assembly elections
The views and opinions expressed in this article are those of the authors and do not necessarily reflect the official policy or position of DailyO.in or the India Today Group. The writers are solely responsible for any claims arising out of the contents of this article.

Author is a PhD candidate at the Centre for Political Studies, Jawaharlal Nehru University.