After his party being ousted from Telangana's political equation, and with YS Jagan increasingly rising as a strong contender to Andhra Chief Minister post, Naidu needs to up his political game to stay relevant in the anti-Modi brigade

After his electoral triumph, KCR came to Telangana Bhavan on Tuesday, garlanded the Telangana Thalli statue, and addressed the press. At his sarcastic best, KCR said that he wanted to offer a “return gift” to Chandrababu Naidu, and sounded almost like Julius Caesar.

Read below from the Shakespearean epic:

"Caesar comes... He is going to be crowned. Coming victorious to Rome. About Casius, lean and hungry look, he thinks too much. Such men are dangerous. Caesar “Seldom he smiles, and smile in such a sort as if he mocked himself, and scorned his spirit that could be moved to smile at anything. Such men as he be never at heart’s ease, whilst they behold a greater than themselves and therefore are they very dangerous."

The verses are so apt in describing the situation around the Telangana Assembly elections.

Initially, the Telugu Desam Party (TDP) chief was keen to enter an electoral understanding with the Telangana Rashtra Samithi (TRS). However, when he broached it at an inappropriate occasion to TRS supreme KCR’s son, KT Rama Rao — the latter was taken aback. In fact, KTR recounted the incident while campaigning, and also when he addressed the media soon.

According to KTR, Naidu had proposed that the TDP should have an alliance with the TRS when the Telangana Industries Minister had gone to condole the death of Nandamuri Harikrishna —Naidu's brother-in-law and NT Rama Rao's son. Harikrishna had died in a road accident on August 29. 2018, and KTR had reportedly gone there ahead of the funeral. “I am flabbergasted about the timing of a political proposal. The body of his deceased brother-in-law lay in the state right there. And, a politician of Mr Naidu’s stature was talking to me about an electoral understanding,” said KTR. 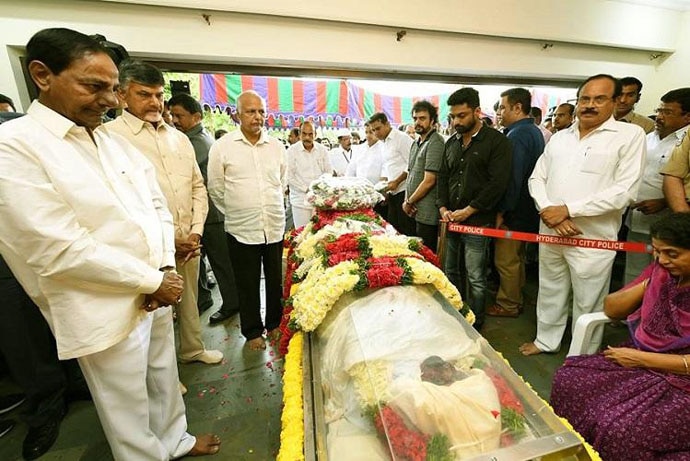 However, KTR immediately shot down the proposal that brooked no delay in decision making on his part. Citing reasons why the alliance would not work, KTR reportedly told Naidu that there had been too many differences between the TDP and the TRS for an electoral understanding between the parties. He also did not mince words when he questioned the timing of the proposal.

It is ironical of Naidu to bring up political conversations at his brother-in-law’s funeral, as the TDP leaders had condemned Jagan’s rush to persuade Congress legislators to support his claim as the next chief minister. This was reportedly done even before the former Chief Minister’s dead body was brought to Hyderabad in September 2009 after Y S Rajasekhara Reddy died in a helicopter crash.

However, Naidu’s proposal for TDP-TRS poll truck even before Harikrishna’s funeral was no different from what TDP alleges about Jagan.

Naidu lost no time in aligning with Congress once he walked out of his political “marriage” of four years with the National Democratic Alliance (NDA), calling Prime Minister Narendra Modi names.

Even during the swearing-in ceremony of H D Kumaraswamy as the Chief Minister of Karnataka, he reportedly rubbed shoulders with Congress president Rahul Gandhi. While KCR also met these leaders, he did so in a phased manner. He started talking about his national agenda almost a year ago — and has been clear since, and as he reiterated on Tuesday after winning the polls —his idea of a non-Congress and non-BJP Alliance is not with a view to forging alliances with all other parties. KCR, in fact, postulated the idea of his Federal Front, saying that there should be Supreme Courts in each state and inter-State or national issues could be handled by Federal courts à la the United States. He further has accused the Centre of holding subjects like healthcare, education and healthcare under its control. He has blamed both the national parties — the BJP and the Congress — of strengthening the concurrent list instead of devolving the subjects to States.

However, Naidu chose to piggyback on the Congress just as he alighted from the back of the BJP. The TDP leader, for instance, chose December 10, 2018, as the day of convening a meeting of 25 political parties in Delhi. This was done just a day ahead of the results of the Telangana Assembly elections. He perhaps knew or would have had an idea that the results on December 11 would surely hamper the prospect of convening the meet, and other parties coming forth to accept his invitation, if not leadership.

As of Wednesday (December 12), the All-India Majlis-e-Ittehaadul Muslimeen (AIMIM) leader Asaduddin Owaisi has said that he would campaign for YS Jagan against Naidu in the upcoming assembly elections in Andhra Pradesh.

KCR went hammer and tongs during the campaigning that he would also set his foot in Andhra Pradesh politics, as part of larger “national agenda” — imitating Naidu’s claim of contesting in Telangana. KCR has, since then, changed the narrative of Telangana polls — from the one that was of a fight between the TDP and TRS — by effectively ruling TDP out of the equation.

TDP’s assertion of becoming a national party no basis according to the Representation of People Act. Neither has the Election Commission conferred any such status on the party for the want of eligibility. And now with his party left with no steam in Telangana (as the results clearly spelt), and his claims of growing as a national party going awry — will Naidu still be able to spearhead an anti-Modi brigade remains a million-dollar question.

#Rahul Gandhi, #Telangana Rashtriya Samithi, #K Chandrasekhar Rao, #N Chandrababu Naidu
The views and opinions expressed in this article are those of the authors and do not necessarily reflect the official policy or position of DailyO.in or the India Today Group. The writers are solely responsible for any claims arising out of the contents of this article.