Real reason behind why Left lost to BJP in Tripura

The defenestration of the Communist Party of India (Marxist) in the Assembly elections to Tripura, a state long considered a pocket borough, has expectedly provoked the commentariat into shooting off "explanations".

The easiest of them is that the party was torn by the "ideological" battle between two of its hefty national leaders - incumbent general secretary Sitaram Yechury and his predecessor Prakash Karat - on the desirability of the Congress as an ally in the struggle against the BJP. Yechury supports alliance with the Congress but Karat thinks it is just as odious as the BJP. 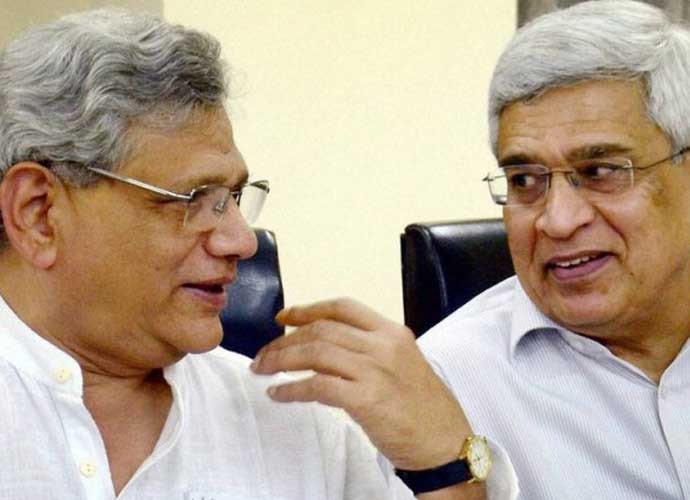 The poignancy of such an explanation is somewhat clouded by the Congress tally in the latest election, in which its vote share dived headfirst to 1.8 per cent, from 36.53 per cent in the 2013 Assembly election. With little hope that erstwhile chief minister Manik Sarkar could salvage his government of 25 years with such slender support, attributing the CPM's defeat to the party's ideological dilemma may be rather imaginative. Also far-fetched, if not contrived, is the view that the Manik regime was corrupt. And this view was expressed by BJP president Amit Shah, whose son recently hit the headlines as the turnover of his business reportedly grew 16,000 times within a year of his papa's party returning to power at the Centre. In Tripura under the Marxists, no doubt there were occasional reports of corruption but none of it was on the scale of Delhi or Mumbai.

A more credible explanation is implicit in the way a Communist party commissar looks at his responsibilities - with a one-size-fits-all brand of equality he must impose on the people he's supposed to govern, and the scorn with which he must hold those who proudly refuse to be subjected to such levelling.

If it sounds outlandishly Orwellian, it is because not many Communists are in power these days, unless you consider comrade Xi Jinping to be one. That is, if you disregard the fact that Xi, despite taking such revolutionary steps as making himself president-for-life, has stood by his eminent predecessor Deng Xiaoping's heraldic line: "It is great to become rich".

Just think about it, isn't it a bit tricky to be "rich" if nobody is poor! However, in India, when parliamentary communists are elected to power in some small enclave, the first thing they did in their quest for equality was to bulldoze the "decadent bourgeois institutions". In Calcutta (now Kolkata), Communists announced their arrival in Bengal by attacking a heritage swimming club.

Later, things took a more serious turn in the name of "equalising" landed property. Even medium-sized holdings in the countryside came progressively under anti-ceiling laws, with the temple first, then the orchard, the fish tank, and so on. On the other hand, the march to equality led to myriads of barga, all handkerchief-size land holdings that are heritable but not saleable or bankable (unless you have the party on your side). As a result, there was no initiative left in the people. There was only sullen anger, which exploded when Mamata Banerjee staked her claim to the right moment.

Things in Tripura are different in scale, not in quality. The late Nripen Chakraborty, Tripura's first CPM chief minister, guided by his own interpretation of equality, virtually turned his little corner in the Northeast into a police state in the making, with reports on his desk of thousands of people in the poor state who were reportedly "living in princely style". Much like a village policeman, he kept a file on everyone in Agartala, the capital. And beyond. Here is something from this correspondent's personal memory: In 1980, as a report on Tripura written by me in India Today, the magazine, caused Chakraborty great displeasure, he wrote a long letter to my editor complaining that the author of the "class-biased" article had the audacity to occupy an "air-conditioned room" in the state guest house. The truth is, in Agartala of 1980s, there was no hotel worth the name and the allotment of a room in the state guest house - including the lone air-conditioned room - required the CM's signature. It was a couple of months later that a Tripura official on a visit to Delhi met me and explained to me that Chakraborty was planning to remove the air-conditioner as he thought all guests should be roasted alike in the sweltering summer heat of Tripura.

The CPM under Chakraborty had lost the poll but came back in the 1990's under Manik Sarkar. The former, it seems, had rubbed the wrong way people more powerful than a mere Delhi reporter, as he ended up getting expelled by his own party; the expulsion order got revoked only when he was in his deathbed. Sarkar has a more pleasant personality but his ideas about equality in the workers' paradise are just as jejune as that of his predecessors.

There are obvious geographical limitations to Tripura's growth, as it is separated from mainland India by nearly 500 miles of Bangladesh landmass. However, the leftist remedy to low growth, and consequent joblessness, is to expand government jobs. Over half of all main workers in the state are employed by the state government. Their wages went up four times in the past 10 years, while pension rose five times. These account for the state's revenue expenditure to the last rupee. Since no government employee accepts that all "babu's are equal", the state government has a matrix of salaries with as many of 42 rows. No wonder that a recent attempt by the government of Manik Sarkar to cut down the rows by about a half - in the name of equality, of course - caused much gripe among government employees, some of whom transferred their loyalty to BJP, the coming force.

In the non-Marxist sense, equality is a legal concept, which implies that all people are subject to the same laws of justice. But, historically, Marxists have little faith in the due process, as evident from the mass murders committed at the behest of Stalin, Mao Zedong or even Pol Pot. The Marxist idea is to impose an extra-legal equality of status, by state fiat, police or muscle power. Its inevitable backlash is the rise of the privileged few, and the consequent schadenfreude.