After being removed from power at the Centre in the 2014 Lok Sabha elections, Congress let many states slip out of its hold.

With the results of the elections for the Assemblies of Tripura, Meghalaya and Nagaland out, the saffron surge has expanded to newer territories. At the same time, however, the presence of the grand old party has shrunk further.

The fact that only two states out of the 26 that went to polls in the last four years were won by the Congress goes on to describe how the party has been decimated.

Four years back, the Congress ruled almost half the country, but after the northeast Assembly election results, if Meghalaya too slips out of its hands, Congress will be left with only three states and one union territory in its bouquet - Punjab in north, Karnataka and Puducherry in south, and Mizoram in northeast.

In 2014, the Congress had governments in 13 states but after the 2014 Lok Sabha elections, its rout started as it lost state after state to the BJP. Karnataka will go to polls around April-May, and Mizoram will hold elections at the end of the year. The results of the northeast polls are likely to have a bearing on the Karnataka elections.

On the other hand, the BJP which rules the Centre has governments in 15 states after the victory in Tripura polls. The BJP-ruled states are: Arunachal Pradesh, Assam, Chhattisgarh, Goa, Gujarat, Haryana, Himachal Pradesh, Jharkhand, Madhya Pradesh, Maharashtra, Manipur, Rajasthan, Uttar Pradesh, Uttarakhand and Tripura. 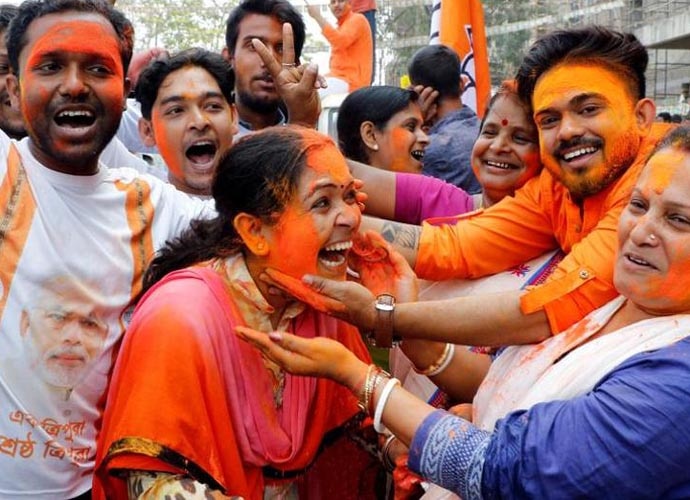 With the results to the northeast elections out, the BJP is likely to form coalition governments in five states - Andhra Pradesh, Bihar, Jammu and Kashmir, Sikkim and Nagaland.

Congress won only two out of 26 seats

After being removed from power at the Centre in the 2014 Lok Sabha elections, many states have slipped out of Congress' hands one by one.

Let us rewind and take a look at the Assembly elections that have taken place in the last four years. In these four years, Congress has managed to win only two states - Puducherry in 2016 and Punjab in 2017. While it was also a part of the mahagathbandhan that won the 2015 Bihar elections, that coalition fell apart.

Apart from these, the TDP-BJP alliance won 2014 elections in Andhra Pradesh. While JDU-BJP alliance is ruling Bihar after the break-up of RJD-JDU-Congress mahagathbandhan. Not only that, PDP-BJP alliance has been running the government in Jammu and Kashmir after the 2014 Assembly elections.

Congress' performance continued to be dismal all through.

Does the Congress need to introspect?

Any political analyst will say yes in response to that question. The answer also lies in the way the BJP has sprung up from zero to a two-thirds majority in Tripura, winning 43 out of 60 seats, while the Congress got stuck to zero. It also got reduced to zero in Nagaland. Even in Meghalaya, the Congress that ruled the state for 15 years is far behind the simple majority figures. It won only 21 seats in the 60-member Assembly.

The party sure needs to introspect and figure out the mistakes it made.

Sonia Gandhi has passed Congress' baton to her son Rahul Gandhi. The party's performance in the Gujarat election had encouraged party workers, and had given thumbs up to Rahul Gandhi's leadership. But the defeat in northeast has once again put a question mark over his charishma and ability to awaken the party from its deep slumber. Congress will have to reconsider its strategy in its plenary session so that apart from retaining Karnataka and Mizoram, it could wrest Madhya Pradesh, Chhattisgarh and Rajasthan from the BJP. Failure to do so will ensure the Congress will have to remain content with only Punjab and Puducherry.

Post your comment
#AIADMK, #Assembly election, #Nagaland, #Meghalaya
The views and opinions expressed in this article are those of the authors and do not necessarily reflect the official policy or position of DailyO.in or the India Today Group. The writers are solely responsible for any claims arising out of the contents of this article.