The Uncongenial Zone: Donald Trump shows India the limits of friendship with the US

US President Donald Trump’s offer to mediate in the Kashmir conflict was not the only controversial or outlandish statement he made in his 40-minute media interaction on July 22, while hosting Pakistan’s military-backed Prime Minister, Imran Khan, at the Oval Office.

Trump also drew a perverse equivalence between India and Pakistan, threw Afghanistan and Hong Kong under the bus, and begged Pakistan to “extricate us” from Afghanistan.

At a time when Trump is under attack at home for his fear-mongering and racist rhetoric, he has also courted controversy with his comments on other nations. Take, for instance, his comments that he could have had Afghanistan “wiped off the face of the Earth” but did not “want to kill 10 million people”.

Those comments were not just bizarre; they were also paradoxical because they were made in the presence of the Prime Minister of Pakistan, which, by creating and nurturing the Taliban, has actively contributed to Afghanistan’s ruin. Indeed, Trump’s repeated bragging that he could kill 10 million Afghans sent out a racist and supercilious message, triggering outrage in Afghanistan. It's a deal: The USA is willing to 'mediate' in the Kashmir issue if Pakistan helps 'extricate' them from Afghanistan. (Photo: Reuters)

In just one media interaction, Trump seriously complicated his country’s relations with Afghanistan and India while betraying Hong Kong’s pro-democracy movement. Trump not only endorsed Chinese President Xi Jinping’s handling of Hong Kong, saying Xi “has acted responsibly, very responsibly” but also gave Xi a virtual license to crack down and end the protests, which, he lamented, had gone on for “a very long time”.

More than Trump’s offer to mediate the Kashmir conflict, it is his turning to Pakistan to “help us out” in Afghanistan that should concern India.

The Faustian bargain that Trump is preparing to strike with the Pakistan-sponsored Taliban will seriously impinge on India’s regional interests and on Indian security, especially in the Kashmir Valley.

Pakistan has harboured the Taliban leadership since the 2001 US invasion of Afghanistan in the expectation that the Taliban, with the Pakistani military’s not-so-covert support, would recapture power in Kabul. Trump’s desperation to end America’s nearly 19-year-long war in Afghanistan has come handy to Pakistan to play Washington again.

In fact, the deal that Islamabad has sought to push with the Trump administration is that, in return for Pakistani help in Afghanistan, the US will agree to play a role in the Kashmir dispute — including helping revive India-Pakistan talks. So, it was not sheer coincidence that Trump chose to speak on Kashmir in Imran Khan’s presence, including declaring that he would “love to be a mediator” between India and Pakistan.

India should not be surprised by Trump’s Kashmir mediation offer because it allowed him to intercede and defuse the subcontinental crisis after the Indian air-strike on the terrorist sanctuary at Balakot, deep inside Pakistan. It was Trump — not Prime Minister Narendra Modi — who announced the India-Pakistan de-escalation. Trump made that announcement on February 28, 2019, while attending a summit meeting with North Korean leader Kim Jong Un in Hanoi. 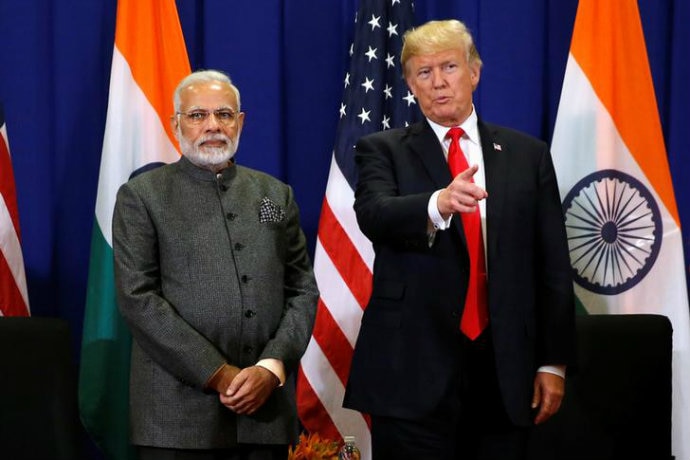 Fairweather friends: India should be concerned that by emboldening Pakistan-Taliban, Trump is putting us at risk. (Photo: Reuters)

The February 26 Balakot strike held the promise of a potential game-changer. India, however, allowed that defining moment to slip away by failing to retaliate against Pakistan’s February 27 aerial blitz. Worse still, it allowed the egotistical showman, Trump, to intercede and take credit for de-escalating the situation — a development that led to the return of the captured Indian pilot.

India similarly allowed US diplomatic intervention to help end the Kargil War, whose 20th anniversary is currently being observed, with Army chief General Bipin Rawat warning Pakistan of a “bloodier nose” next time.

The blunt fact is that India has never sought to bring finality to its disputes with Pakistan, even when opportunities have beckoned it. At Simla in 1972, for example, India could have traded the return of captured territories and 93,000 prisoners of war for a Kashmir settlement and border adjustments, including securing Kartarpur. Yet, despite holding all the cards, India surrendered at the negotiating table what its martyrs gained on the battlefield.

Defence Minister Rajnath Singh said on July 26 that Pakistan can afford to neither fight a full-fledged war, nor a limited war with India, which is why it has chosen to wage a proxy war by terror instead. That is absolutely correct. But it is also true that India’s hesitation to bring closure to its disputes with Pakistan, including treating it as a terrorist state in policy (as opposed to rhetoric), encourages Pakistan’s proxy war as well as America’s readiness to intercede.

Today, India should be deeply concerned that Trump, by emboldening the Pakistan-Taliban combine, is riding roughshod over its regional and security interests.

Add to the picture Trump’s other actions, including barring oil shipments from Iran and raising India’s energy-import bill, expelling India from the US Generalized System of Preferences, and mounting a trade war to secure Indian concessions.

Pakistan used the US-supplied F-16s against India on Feb. 27. Yet, the US has just approved $125 million worth of technical and logistics support services for Pakistan’s F-16 fleet, saying it will not affect the “regional balance”. Those who claim Trump’s July 22 comments mean nothing are missing the new courtship.

The Taliban, which once harboured Al Qaeda, and now carries out the world’s deadliest terrorist attacks, has secured not just the commitment of a US military exit but also a pathway to power in Kabul. Pakistan’s military generals are showing that sponsoring cross-border terrorism pays — their brutal proxies, the Taliban and the Haqqani Network, have compelled the US president to negotiate the terms of American surrender in Afghanistan and seek Pakistan’s support to finalize the exit.

The draft agreement Trump’s special envoy Zalmay Khalilzad has reached with the Taliban reportedly incorporates mere Taliban promises but major US concessions, including a pledge to release 13,000 Taliban prisoners, a reference to the Taliban controlling an “emirate” and a deal for the “safe passage” of American troops out of Afghanistan. Historical Blunder: After 19 years of fighting the Taliban, the US is willing to give them an entry into Afghanistan again. (Photo: Reuters)

Not surprisingly, the Trump administration’s impending capitulation to the Taliban-Pakistan axis will come as a shot in the arm for Pakistan’s India-centred terrorist outfits like the Lashkar-e-Taiba and Jaish-e-Mohammed. Indeed, no organisation will likely be more emboldened than Pakistan’s rogue Inter-Services Intelligence (ISI) agency, which fathered these outfits.

History is repeating itself — the US is once again abandoning war-ravaged Afghanistan, just as it did three decades ago following a successful CIA covert operation that forced Soviet troops out of that country. That success, paradoxically, helped turn Afghanistan into a citadel of transnational terrorism. It also allowed the ISI (which actively aided the CIA operation) to install the Taliban in power.

With the US again ready to let Pakistan have its way in Afghanistan, whatever gains the latter has made in terms of women’s and civil rights would likely be reversed once the Taliban re-impose the medieval practices they enforced during their harsh rule from 1996 to 2001. That development, in turn, will further boost the power of Islamists in Pakistan.

The US is clearly coming full circle. Nearly 19 years after removing the Taliban from power and forcing their leaders to flee to Pakistan, the US is ready to let that same thuggish group regain the reins of power.

India is learning the soundness of that statement the hard way.

Also read: Imran Khan Gets Trumped: The Imran Khan-Donald Trump meeting was a desperate job interview, not a state visit

#Taliban peace talks, #Afghanistan, #Imran Khan, #Donald Trump
The views and opinions expressed in this article are those of the authors and do not necessarily reflect the official policy or position of DailyO.in or the India Today Group. The writers are solely responsible for any claims arising out of the contents of this article.