How police firing on anti-Sterlite protesters has left Tuticorin bleeding

Maliga, with her seven-year-old son, has been frantically walking in and out of the government hospital in Tuticorin. Every half hour, she has been either calling or trying to personally visit the police stations in and around the hospital. Tears flow down her cheek non-stop and finally, in-between heavy breaths, Maliga narrates, “My second son accidentally was present when the protests were happening; as the police opened fire, he got shot on his leg and my elder son, who rushed here to meet his younger brother, was taken into police custody. The reason being him wearing black cloth.”

From morning, the mother of three has been frantically searching for her eldest son who is 23 years of age. Her second son, 22 years old, has lost his leg and is undergoing treatment at the government hospital. “I have no other option now. The police isn’t telling me where my eldest boy was taken. By evening today, if I don’t get an answer, this little one and I will immolate ourselves right here at the hospital,” said Maliga pointing at her seven-year-old. Injured protestors being taken to hospital on May 22. [Credit: PTI photo]

Maliga is not the only one here. Thousands of others across the city of Tuticorin have been suffering, not knowing the status of their kin who participated, or were just present, at the anti-Sterlite protest on May 21.

As of now, close to 12 people have been killed and more than 80 people are undergoing treatment at the government hospital, which is highly protected with the special strike force in place. “Family members of the victims are not allowed here, patients have told me that they are not being treated well and that there is shortage of food and water too,” said S Thirunavukkarasar, the Tamil Nadu State Congress Committee president.

Talking with him, Thol Thirumavalavan, Viduthalai Chiruthaigal Katchi (VCK) party chief, said, “With all this happening, we only want Sterlite to be closed.” He also said that the past should not be discussed but the authorities should think about the actions needed now. Superstar-turned-politician Rajinikanth, who is slated to launch his political party, also called the scenario in Trichy a failure of police intelligence.

The situation in the entire city is grim, violence erupting every now and then. Soon after actor Kamal Haasan, chief of the Makkal Needhi Maiam party, left the hospital premises, over 100 people gathered there were removed by police officials. “According to Section 144 of the IPC, no more than four people can assemble at one spot. We have used minimal force to remove them after the protesters here started pelting stones. The families who have come here were affected. The situation is now under control,” said DIG Trichy Pradeep Kumar, who is in-charge at the government hospital today. 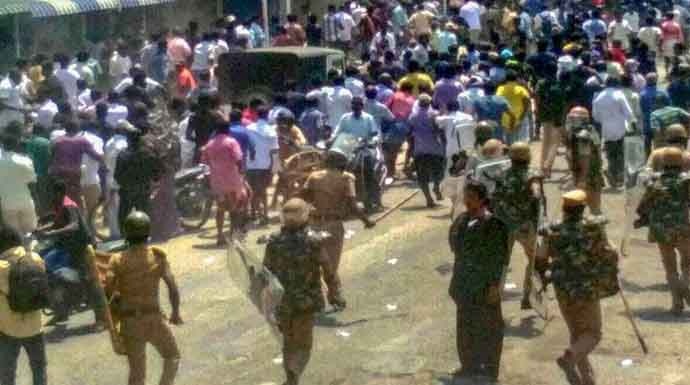 Police baton-charging agitators in Tuticorin on May 22. [Credit: PTI photo]

But, minutes after this, just a few hundred metres away from the hospital, grey smoke filled the neighbourhood and a police van was set ablaze. As the fire fighters were battling to control the blaze, locals said the police and government of Tamil Nadu were not working for the welfare of the people. “All that we wanted is a clean environment and we are being killed for this,” a crowd of people outside the government Hospital asserted.

At various locations in the city, many vehicles were set on fire. And the district collectorate had a a grim look with overturned charred vehicles, broken glass and smashed windows, stones all over the place. As politicians criticised the state government, Fathima Babu, who has been protesting against Sterlite for the past 22 years and who filed the petition with the Madurai bench of the Madras High Court, demanding the Sterlite factory be shut, said, “All the major political parties are responsible for the scenario that has panned out here. Even though today’s verdict staying the expansion of Sterlite is a victory, it is sad to see how our city is burning down.”

Every single protester at Tuticorin has a story of loss and pain which they associate with the Sterlite factory. One of the protesters killed yesterday lost his close friend to cancer which, protesters said, was because of the exposure to contaminated water, air and land in Tuticorin reportedly due to Sterlite. While talking to Business Today, the Sterlite CEO said that their plant has been completely complying with the orders of the Green Tribunal, but people, including Fathima Babu, contested the claims of Sterlite, stating these were lies and that people were dying every single day because of Sterlite.

The Tamil nadu government has now ordered the suspension of internet services in Tuticorin, Tirunelveli and Kanyakumari districts of Tamil Nadu to prevent the "spread of false information".

Internet connection cut in Thooththukkudi? Alarming! What next? excommunicate Tamilnadu? TN would see an uprising,much bigger than any, in its history. No Government is strong enough to take on the might of my people.

@PMOIndia @narendramodi There is no communal fights in Tuticorin. We ate protesting against a factory that is polluting air and water. U are stopping us and preaching Swatch Bharath. Y do u need to stop internet??

In 2012, protests against Kudankulam too had turned violent, but that did not last long. In Tuticorin, however, the last two days have seen intense violence coming on top of 99 days of silent protests against Sterlite. “We are not criminals or terrorists, we were just demanding the state ensure our right to live, but here they have failed us and ended up killing 12 people,” said an angry protester at the government hospital. The protesters had similar questions to ask — who is responsible for the violence? Who ordered the firing? Where is the state government and where are the AIADMK ministers - or the chief minister?

Meanwhile, outside the hospital, as police march in and out, clearing the crowd, one person frantically searching for her son is Maliga.