Tuticorin at once reminds us of snipers and sharpshooters. One of them in a striking yellow shirt.

They seem to be calling the shots these days, celebrating the bloodbath of innocents, unprecedented in recent times. What seemed a distant phenomena in the Middle East, has suddenly come to stalk the political unconscious of the civil society in the heart of Tamil Nadu’s industrial hub. It has raised once again the simmering wounds of one-dimensional globalisation at all costs, even as ecology is subsumed by the brute power of profit, big corporations and multinational lobbies, while the mighty state chooses to become the armed pimp, on behalf of big business. The people, and the environment, can go get damned. 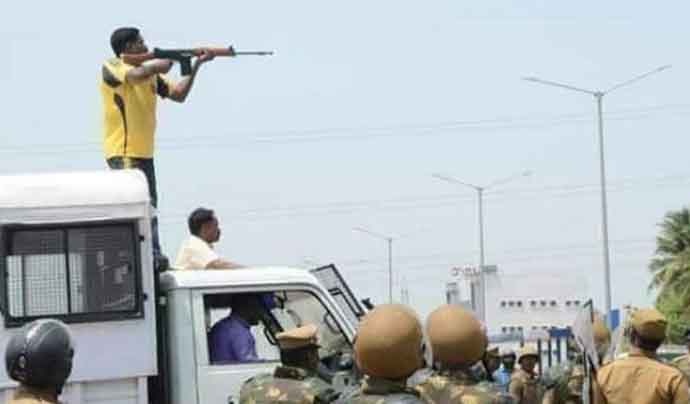 Spot the yellow dog: A policeman in plainclothes aiming a rifle at protesters as they marched to the Tuticorin Collectorate against the expansion of the Sterlite Copper plant owned by Vedanta. [Credit: Twitter]

Indeed, snipers and sharpshooters, often in "mufti", surrounded by hordes of armed security forces, seem to be in much demand these days by repressive regimes. At the Gaza Strip in recent times, Israeli snipers shot dead at least 60 unarmed protesters, including an eight-month old baby, picking up targets at random, and shooting at knees, chest, throat and faces, even while Donald Trump’s daughter Ivanka Trump, along with the Israeli establishment, celebrated with great glory, pomp and show, the symbolic "annexation" of East Jerusalem with the new American embassy. Thousands have been injured and hospitalised, in abysmal medical conditions, insulated, imprisoned and isolated by Israel in what is called the largest ghetto in the world.

Trump really cared a damn that almost the entire world, including most of Europe, does not recognise it, the United Nations calls it a violation of international norms, and the Palestinians of "Occupied Palestine" would always call East Jerusalem their real and imagined capital.

At Tuticorin, on May 22, the man with a yellow shirt, perched on the top of what appears to be a police van, surrounded by hordes of armed khaki personnel, seems to be inspired by the Israeli snipers. The sniper, among allegedly others in "civilian" clothes, was picking people at random, shooting to kill — as if Tuticorin is the Gaza Strip. They killed my baby: The mother of the eight-month-old Palestinian infant who was killed by tear gas mourns as she carries her body during the funeral in Gaza. [Credit: Reuters]

Basic police parameters were not applied when face to face with protests, peaceful or violent. These parameters include police permission for the protest, awareness of the nature of protests and the organisers, early intelligence reports, multiple warnings on loud speakers, the use of water cannons, mild lathicharge, rubber bullets, and after more warnings, if the situation is ugly, violent and beyond redemption — firing. Even then, firing is meant to be on the knees — below the waist as the cliché goes.

However, as in Gaza, or in Kashmir, police firing seems to be almost always done to shoot and kill. In Kashmir, the pallets which blinded hundreds of young protesters, were another lethal method used to "crush" street protests. It basically implies one important fact — that the governments of the time believe that dissenters are all enemies and should be treated as such. As in war.

There has been a long and protracted war going on at Tuticorin against Vedanta’s Copper Smelter plants which apparently generates four lakh tonnes of copper per annum. It has been shut in recent times because it allegedly violated multiple environmental laws — which is denied by the London-based company. Vedanta is loved by various governments because of its deep pockets and reasonable disregard for social and ecological ethics.

It has acquired a certain pronounced global notoriety in terms of violating basic environmental norms, while backing multi-million projects, including mining in ecological hotspots such as Niyamgiri in western Odisha. Their corporate social responsibility (CSR) and PR apparatus often makes it look like the greatest symbol of development and philanthropy, but environmentalists as much as local and indigenous people who are directly hit by their huge projects, have seen through their game.

The controversial plant has been shut in Tuticorin for some time now, as in the past. Locals have accused Sterlite of polluting air and ground water. The Tamil Nadu Pollution Control Board had refused to pass Vedanta's licence to operate the smelter in April. It had categorically stated that the company did not comply with local environmental laws. The order was challenged by Sterlite. The next hearing is slotted on June 6. Sterlite has also been charged with dumping copper slag in a river and not providing factual documentation of groundwater condition of borewells around the plant.

In Tuticorn, the last 99 days witnessed mass peaceful protests. On March 24 earlier, there have been huge protests comprising thousands of people. The protest is not limited to the industrial site, but has struck a chord across the district. On May 22, locals knew that it will be a massive march, involving thousands. So, how come, the government, the district administration, the police and its bosses, missed this basic intelligence

Latest ground reports claim that the death count might increase. Petrol bombs were hurled by the protesters, vehicles were burnt, even ordinary people were attacked because they thought they were cops in civilian clothes. Scores of people are apparently hiding with serious wounds or gunshots. There are many under detention. Up a blind alley: Kashmiri women protesting against the use of pellets in the Valley. [Credit: AP photo]

The Tamil Nadu government, led by the fledgling factions of the AIADMK, have defended the killings. Prime Minister Narendra Modi, who tweets routinely and has a lot of anecdotes to tell in his "Mann ki Baat" — has once again chosen abject silence. There are reports that Vedanta is allegedly one of the big backers of the BJP regime in Delhi. Almost the entire Tamil Nadu Opposition, including human rights groups and civil society members, have condemned the killings. The Madras High Court has ordered that the Sterlite Copper Smelter Plant will not operate until further orders.

The armed struggle of the Maoists, who do not believe in the Indian Constitution, in the mineral-rich jungles of Chhattisgarh and western Odisha, has effectively blocked the many MOUs signed by the Centre and state government with miscellaneous multi-national companies and Indian big business groups, even while the bloody war with ritualistic killings on both sides continues unabated.

What is ignored in the process are the many non-violent, peaceful, unarmed and constitutional struggles across the deep interiors of rural and tribal India against the entire might of corporates and the state, with social/political movements continuing for decades amid relentless repression and against all odds. And most of them are not led by any Left or radical group. They are mostly an indigenous synthesis of local dissent comprising multiple ideologies and political currents from Gandhi to Birsa Munda to Marxism-Leninism and socialism. Witness the killings of 13 tribals in cold blood in Kalinganagar in 2006 against a private steel plant.

Or the long non-violent struggles, facing jail, violence and police repression in the interiors of Kashipur in western Odisha against bauxite mining, or against the massive 12 billion Posco project of the South Koreans in Jagatsinghpur in Odisha. Even the peaceful Niyamgiri struggle against bauxite mining by the Vedantas, led by the Dongria tribes, with their women with flowers in their hair leading the struggle, has been a big success. Vedanta was just not able to violate environmental laws out there by hook or crook as the tribals in this sublime and beautiful eological hotspot, rejected the project, in one gram sabha after another.

Indeed, in contemporary India, from Nandigram to Singur, or Kundankulam to Jaitapur, human rights, land rights, fundamental, constitutional rights, and environmental consciousness has risen across the landscape of protest. People are deeply sensitive and aware of their ecology and social expanse. They will not accept the downward filter theory of brutish development and globalisation, without social consensus or conscience, anymore.

And, for that, they are often paying a bloody price. As in, Tuticorin.