Did the Uttar Pradesh government actually try to shield ruling BJP MLA Kuldeep Singh Sengar against charges of gang rape of a 17-year-old girl in Unnao, barely 50km from Lucknow, the state capital?

Even as the question was hotly debated among common people, the Allahabad High Court came down heavily on the Yogi Adityanath government clearly indicating that the one-year-old UP government left no stone unturned to protect the party MLA, who was arrested by the CBI only as late as on Friday night, April 13. The HC bench comprising chief justice DB Bhonsale and justice Sumeet Kumar, that had taken suo motto cognisance of the sensational case, did not mince words in castigating state advocate general Raghvendra Singh, who clearly went out of his way to extend all help to the accused. "The approach of the learned advocate general is not only appalling but also shocks the conscience of the court in the backdrop of the instant case," the court observed in its 20-page landmark order.

The order points out, "The disturbing feature of the case is that the law and order machinery and the government officials were directly in league and under the influence of Kuldeep Singh. The doctor did not examine the prosecutrix, nor did the circle officer, Shafipur, register the crime, though a handwritten complaint of the prosecutrix was sent from the office of the chief minister. On petty offence, father of prosecutrix was beaten up by the brother, and the goons of Kuldeep Singh and was arrested and in the custody was beaten mercilessly. It further appears that false cases were lodged against the family members. Finally, father of the prosecutrix succumbed to injuries. The prosecutrix unable to face the pressures exercised upon her by Kuldeep Singh, who was having the backing of the law and order machinery of district Unnao, attempted to immolate herself to draw the attention of the society that she needs help and protection of the custodians of law, which was put to the winds at the behest of the accused Kuldeep Singh. (sic)"

Taking strong exception to the advocate general's "soft attitude" towards the accused, the court said, "we are constrained to record the approach and attitude of the learned advocate general, during the course of hearing, in contending that no accused person, including Kuldeep Singh, can be arrested without the investigating officer following the procedure prescribed under CrPC (Code of Criminal Procedure) and collecting evidence in support of the allegation of rape."

Taking serious note of the administration's obvious collusion, the court pointed out, "The prosecutrix and her family members have been running from post to pillar but her complaint was not registered, despite approaching the chief minister. The influence of the accused Kuldeep Singh in the district police administration is such that the circle officer also declined to lodge the report on the complaint duly forwarded by the office of the chief minister. The medical officer declined to examine the prosecutrix, mandatorily required, where a woman alleges rape. Even the procedure for taking down the FIR/Crime 0316 dated 20.06.2017 under the provisions of CrPC was not followed. The complaint was not reduced to writing by a female police personnel and video graphed. False cases were lodged against the Chacha (uncle) of the prosecutrix and on petty offence father was arrested and brutally assaulted. The chief medical officer furnished fitness certificate and sent the father to jail where he succumbed to injuries."

It added, "the accused Kuldeep Singh from the narration of facts in the report of ADG dated April 11, 2018, taken on face value, clearly reflects that the accused has been using his office and influence with impunity to tamper evidence and witnesses, further, has exercised undue influence with law and order machinery to manipulate and coerce the family members of the prosecutrix and brutally assaulted her father. This is a classic case where we find that the accused persons have not kept a single stone unturned to terrorize not only victim/prosecutrix but her family members and other witnesses. The victim has lost her father merely because cognizance was not taken of her complaint made in August 2017. Had the police taken cognizance of the complaint to the chief minister and forwarded to the concerned police station at that stage, perhaps, further damage, including the death of prosecutrix's father would not have taken place."

Lamenting over the advocate general's repeated plea for not arresting the accused MLA, the court held, "In the backdrop of the facts noted by the SIT, learned advocate general on repeated query vehemently and categorically stated that the investigating officer will not arrest the accused Kuldeep Singh until statements under Section 161/164 CrPC are recorded and in the opinion of the investigating officer the accused is, prima facie, involved in the commission of the crime."

It went on to add, "The approach of the learned advocate general not only exudes an unpleasant flavour, but raises doubts about the bona fides of the police authorities at the highest level. We are unable to persuade ourselves in accepting the contention of learned advocate general that the accused in the circumstances cannot be arrested. In our opinion, arrest of the accused in the present case is necessarily required to safeguard the majesty of law and the dignity of the prosecutrix and to instil confidence that free and fair investigation shall be undertaken by the investigating agency." 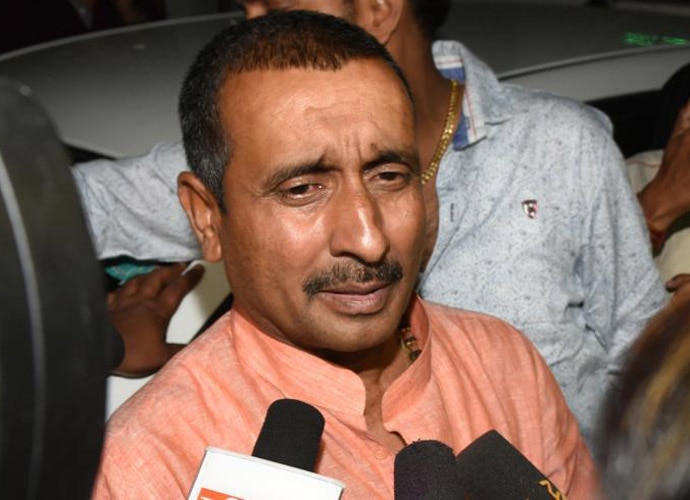 Casting further aspersions on the advocate general, the bench headed by the chief justice said, "The purpose of CrPC is to facilitate the inquiry and investigation into the commission/omission of the crimes. No person or state officer can take technical pleas which does not sub-serve the interest of investigation or fails to protect the victim of heinous crime. If the argument and the stand of learned advocate general is to be accepted, it will send a wrong and devastating message in the society and would directly facilitate the cause of the accused in the instant case and the inaction of the investigating agency in bringing the culprit to the book."

Reacting sharply to the advocate general's consistent plea that the MLA could not be arrested unless the investigation officer found sufficient evidence to establish the charges levelled against the accused MLA, the court asked, "We specifically asked learned advocate general as to whether such procedure is being followed by the investigating agency in the state of Uttar Pradesh in all such cases, he could not reply our query."

Top legal luminaries of the state were of the view that it was rare for the high court to be castigating the advocate general in such strong words. They also felt that but for the high court's intervention, the all powerful MLA would have gone scot-free, especially since he enjoyed such blatant patronage of the state.

Thirteen months back, when Yogi Adityanath was entrusted with the reins of India's most populous state, a large chunk of the people of Uttar Pradesh looked up to him with hope and even admiration. After all, by winning as many as 324 of the state's 403 seats in the 2017 state Assembly elections, the Bhartiya Janata Party (BJP) had created a record of sorts, propelling a visibly polarised Hindu population to believe that they would now, at long last, get some respite from what was widely perceived to be a "corrupt" and "criminalised" regime under Akhilesh Yadav and his family.

One year down the line, even many of the saffron clad chief minister's admirers have begun to feel the disillusionment with his style of working, which remained laced with overdose of high-sounding claims, tall promises and lip service.

While his failures on various fronts were seen as a consequence of his inexperience in governance - anything beyond the precincts of the multi-crore Gorakhnath temple trust that he has been running for decades - what seems to have exposed his frailties and fallacies is the more recent Unnao rape and murder case. Yogi would not tire of proclaiming himself as the last word in ensuring protection and safety of women. And to prove his point, he started his tenure with creation of "anti-Romeo squads", which ended up only harassing young boys and girls sitting together in public places. But, when it came to ground reality, it took 10 months for the 17- year-old rape victim to get a FIR registered against the all powerful BJP MLA Sengar, who rules the roost in Unnao, a district barely 50km from Lucknow, the state capital.

The Yogi administration failed to take any cognisance of the poor victim's oft repeated pleas until she attempted self-immolation in front of the chief minister's residence last Sunday, following which she hit the headlines in both print and electronic media. Eventually, what shook the government out of its wits was the intervention of the high court, which came to the rescue of the hapless gang-rape victim.

Post your comment
#Allahabad high court, #Yogi Adityanath, #Kuldeep Singh Sengar, #Unnao rape
The views and opinions expressed in this article are those of the authors and do not necessarily reflect the official policy or position of DailyO.in or the India Today Group. The writers are solely responsible for any claims arising out of the contents of this article.