Why I have already voted for Joe Biden

I voted for Biden because I want to see “Life, Liberty, and the pursuit of Happiness” become self-evident truths once again for all Americans. The 2020 elections are about America’s very existence.

I am a registered, independent voter. And I have already voted for Joe Biden via mail-in ballot.

To stay true to my civic duty as a naturalised US citizen, I picked 16 options (two write-ins) for national, state, and local candidates and marked my options on six amendments and one referendum. It took me thirty-seven minutes to make somewhat informed decisions. My county’s Election Commissioner’s website in a “red” state says my vote has been counted.

Five Thirty-Eight’s forecast gives Biden 87 in 100 chances of winning, 346 electoral votes (270 needed to win), and 53.4 per cent of the popular vote. That’s the math part. What’s not so clear is who is the cloaked-Trump-voter even though 50 million votes have been counted already.

I don’t agree with many of Biden’s and the Democratic Party’s policy positions. However, I very strongly feel that the 2020 elections are about the United States of America’s very existence, why its constituents and the world look to her for morality and leadership. 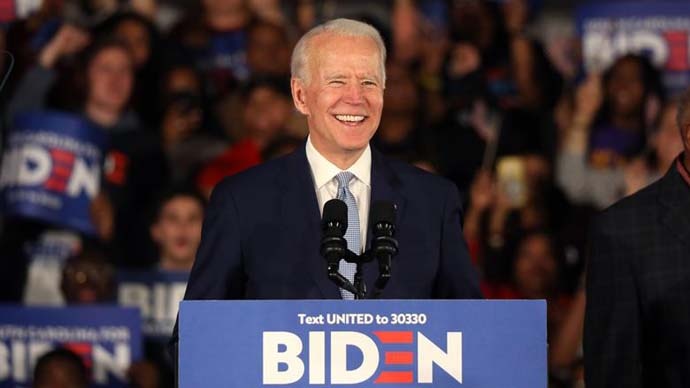 I voted for Biden because I want to see “Life, Liberty, and the pursuit of Happiness” become self-evident truths once again for all Americans. (Photo: Reuters)

I chose not to vote for Trump because I do not want to endorse perpetual lies and insults for another four years. I voted for Biden because I want to see “Life, Liberty, and the pursuit of Happiness” become self-evident truths once again for all Americans. I am betting on the possibility of a better future over the revival of a historically wronged past.

About one per cent of US voters are Indian-Americans, and they do not consider US-India relations to be a decisive factor. Carnegie Endowment for International Peace’s paper claims 72 per cent are planning to vote for Biden.

The legal-political requirements to be the President as directed by the Constitution are: must be a natural-born citizen of the United States, a resident for 14 years, and 35 years of age or older. These stipulations are just not enough. What about political (eg. duty) qualification?

The religious world that gravitates towards exclusivity always figures out how to justify their candidate; the corrupt religious and corrupt political conspire to control the masses. The Sikh charter, manifesto, and scripture – Guru Granth Sahib – offers insight on who has the right to lead people: “Only the worthy ruler must occupy the throne. The ones connected with one-Eternal are the true rulers. The land-owners can’t be called the rulers for they are in pain due to other love.” (1088)

In today’s environment, rulers are the elected representatives in most nation-states; not monarchs. The Sikh worldview says that one’s net worth, including the real-estate empire, doesn’t qualify one to become the state’s head. They must believe in Oneness, i.e., all human beings do not just share an attribute of One but are all attributes of the One.

Given the effectively binary decision-making, it is imperative to choose the best available candidate who practices oneness while making policy decisions and not just a vague articulation of oneness that sounds and feels good. While Biden is certainly not an ideal candidate, he is a decent man who cares about the people, the nation and the globe. His record of working with Republicans and Democrats shows he will solve the current critical issues. He will restore honour and dignity to the office of the Presidency. He will respect all constituents and all branches and systems of the government.

“Trumpism” must be defeated so that the US republic can function again, arguably not perfect, yet the best project on Earth.

Trump bullied, co-opted, and corrupted even the Republican Party. Barring the co-opted Republicans, “elephant-giants” of the Republican Party still view elected office as public service, believe in civility, and work with Democrats to solve problems. They have integrity and put public interest before party service or sycophancy.

As a president, Biden will actually “make America great again,” but not just for a particular race, class, or gender but also for all its residents. He will also lead the tough conversations and decisions facing the world today. He will reassure US allies of a stable and reliable partner; his administration will engage with US adversaries responsibly and firmly.

I sincerely hope all Americans, including Republicans like those at the Lincoln Project, will vote for Joe Biden. If US citizens defeat Trump unquestionably and resoundingly, “Trumpism” may vanish slowly. Then, America will heal faster. Democrats and Republicans must then rebuild their political parties to serve “we the people” with opposing ideas, not insults. In a world where economics trumps everything, even there, Biden is better for the economy and stock market as per Moody’s ratings.

I hope the South Asians, Indians, and Sikhs will go beyond a one-issue vote for 2020, including transcending their tax-bracket as the deciding factor. These three rising voter blocks and LatinX and non-college White men can join the alliance of “blacks and browns” to make this a 2020 mandate against Trumpism.

As for the second-in-commands, who is most qualified to lead if something happens to the two white men in their seventies? “Lotus Goddess” seems more promising than “Ruler God.” I am overlooking Kamala Devi Harris’s fiasco in dealing with Sikh issues. I am concerned about Michael Richard Pence using his religion to crucify ‘others’ politically.

We all know Trump is unfit for the job. US citizens must not make the same mistake twice.