Why the nexus between vigilantes and nationalism is alarming

Nationalism carries flawed ideals that can be transmuted into a cult of vigilantes who are ready to plead their allegiance and prove their loyalty towards a constructed superior identity of a nation.

When Vikas Dubey was arrested by the UP Police on July 11, there seemed to have been prompted a sort of premonitory chatter, an intuitive prediction among the political pundits and the journalistic community that the infamous gangster had only a few more hours to live. The notorious gangster was guilty of innumerable crimes over the last two decades, including the recent killings of eight police officers. Dubey had effortlessly functioned in the most populous state with the largest police force in the country for the last couple of decades. He was believed to be a crucial asset in proving the apparent existence of a long-standing nexus that not only involves local gangsters like him, but also political figures and law enforcement officers.

Dubey, however, was killed in an encounter by the police when he allegedly tried to attack an officer and flee. Notably, the prediction of Vikas Dubey’s death was not as much of a random guess as it was an informed forecast. This recent episode of extra-judicial killing was the 119th encounter since Yogi Adityanath’s appointment as the Chief Minister of Uttar Pradesh. This has once again fanned the heated discourse on police vigilantism, and vigilantism in general, and the empowering impunity that it is conveniently provided by the government. While these acts of assumed heroism are applauded by many, it is imperative to acknowledge that it can also turn erosive to the constitutional values if made a habitual practice.

If fundamentally dissected, vigilantism, when played out by the state, is liable to draw criticism. It can be seen in two lights. One, it could either be a hasty practice to acquire immediate results to garner public satisfaction. But it is actually an irresponsible and ineffective alternative for tackling systemic issues that are culturally embedded in our society, the rectification of which requires long-term efforts. Two, in cases like Vikas Dubey’s, the lawless sway of vigilantism seems to benefit certain democratic institutions looking to ensure that the skeletons stay in the closet.

Dubey’s encounter exemplified the latter. But there have been examples of the state practising the former too. For instance, the manner in which the four suspects of the gang rape case in Telangana were shot dead when they allegedly tried to flee during a ‘crime reconstruction’ process. That instance was also laced with inconsistencies and attracted debate and political discord on the issue. What stands out, however, in both the cases is the overwhelming public acceptance of the actions, the majoritarian belief that the end justifies the means, that the decision to side-track the judicial process is validated by the sentiment of swift justice. There seems to be a mutual acceptance between the current democratic system and the governed population regarding vigilantism. 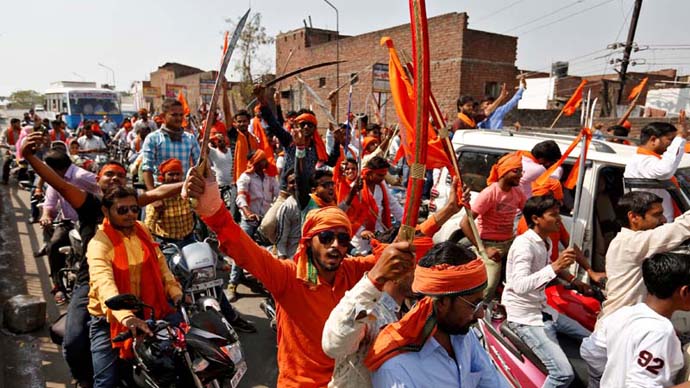 If fundamentally dissected, vigilantism, when played out by the state, is liable to draw criticism. (Photo: Reuters)

It is evident in a democracy that the values and beliefs of the elected institutions are often reflective of the society that elected them. It is a co-dependent dynamic that acknowledges and complements each other through many and usually tragic instances. The current government has had a history of enticing its targeted audience with raves of nationalistic ideas, attaining global resurgence and restoring the ‘core values’ of our nation. It has managed to plant among a large population a notion of exaggerated national pride, and urgency of the need to defend it at all costs. Therefore, the institutions, as well as the public, have been fervently involved in acts of vigilantism, motivated by a misplaced notion of ‘nation above everything’.

Rabindranath Tagore wrote disparagingly about the idea of nationalism in his essay, The Nation, perhaps to forewarn us about such occurrences. He noted that “when the idea of the Nation, tries to pass off the cult of collective selfishness as a moral duty, simply because that selfishness is gigantic in stature, it not only causes depredation but attacks the very vitals of humanity.” He understood deeply how men, deluded with an ignited passion to associate their identity with that of a nation, could be used as powerful political tools. And if not kept in check, the nationalistic ideas “unconsciously generate in people’s minds an attitude of defiance against moral law” or, in this context, the constitutional law too.

The mob attacks in Jamila Milia Islamia serve as the perfect testimony to Tagore’s words. Students who participated in peaceful protests were instantly labelled as ‘anti-nationals’. The vigilantes who took the showcase of dissent against the government as an attack on the identity of the nation (and, thus, themselves), stormed the campus. Clad in masks and equipped with weapons and a delusional allegiance, they had arrived to “restore order” and “preserve the national pride”. They did so with impunity. The co-dependent dynamic had acknowledged itself yet again.

Although Tagore criticised such acts motivated by blind nationalism, he also mentioned that “the people’s instinct of self-preservation is made dominant at a particular time of crisis”. The responsibility, as implied, does not primarily lie with the public but with the elected political institutions. They are grossly indulged in misleading the community and creating a volatile climate of false impending crises; results of which are recurring violent outbreaks in the name of the country.

While Tagore’s perspective rebuked the moral foundations of nationalism, the Orwellian perspective blatantly labels it as “power-hunger tempered by self-deception.” To George Orwell, a nationalist was one whose thoughts revolved around nothing but “competitive prestige”. Orwell, in one of his literary pieces, goes on to list the inherent characteristics of a nationalist: an obsession with superiority and indifference to reality and objective truth. He wrote to timeless relevance that “nationalism is inseparable with power”.

This power complex can be found in contemporary times too. Often saturated in hypocrisy, political leaders condemn, arrest, and threaten peaceful protesters who are exercising their right to dissent, but subtly submit to systemic vigilantism themselves. They do so by either committing it themselves or by turning a blind eye to others committing it under the banner of nationalism, as long as the implications of it propel their interests.

Nationalism — either from a political lens or a philosophical one — carries flawed ideals that with the aid of appropriate redressal and charming propaganda, can be transmuted into a cult of vigilantes who are ready to plead their allegiance and prove their loyalty towards a constructed superior identity of a nation. But in doing so, ironically, they unwittingly forfeit the very moral and fundamental values upon which the nation was built.

As Tagore mentioned the inevitability of evil to be produced by a system that was built on the wrong psychology, we are unfortunately witnessing a similar system. He also firmly believed that to treat the ills of nationalism, one may attempt to establish a new institution, "but so long as men have not forsaken their idolatry of primitive instincts and collective passions, the new system will only become a new instrument of suffering".