Rahul Gandhi contesting two Lok Sabha seats, both Amethi and Wayanad, does not reflect a crisis of confidence. It actually shows systematic planning towards a larger political goal.

I met a planter from Wayanad, a week ago at the bar of one of the old clubs in the Nilgiris. At that time, Rahul Gandhi contesting from that constituency was just a rumour. “We need roads from Wayanad. Now, it seems we will get a mobile phone factory," he quipped.

Of course that was in jest. But it also revealed a lack of excitement that was telling, even though he was a sample of one. They're quite happy! UDF workers after Congress president Rahul Gandhi declared he will contest from Wayanad. (Source: PTI)

Since then, much water has flown down the Kabini. After checking its quality and temperature, Rahul Gandhi’s political managers have declared it 'safe' for him to take a dip. Naturally, there is rapid exchange of fire in the media about the possible rationale of the Congress scion’s choice of a verdant corner in the northeast of 'God’s Own Country'. While political parties can quarrel over which God resides in Wayanad, and analysts can argue about its implications, the decision does send out some signals to Congress’ friends and foes alike.

First, the Congress and Rahul Gandhi have decided to chart their own path — and do not feel the need to take potential allies into confidence. If Prakash Karat of the CPI(M) is to be taken at face value, the Left has viewed it as an affront, scotching chances of an understanding at the local or national level. Taking a cue from his comrade, Sitaram Yechury ruled out any seat adjustment in West Bengal. They're not happy: Prakash Karat and his party CPI(M) are apparently miffed at Rahul Gandhi's decision to contest from Wayanad. (Source: PTI)

Almost simultaneously, after protracted procrastination, the Congress put an end to all speculations about a tie-up with AAP in Delhi. During his campaign outing in the old Congress bastion of Malda in Bengal, Rahul Gandhi also upped the ante against Mamata Banerjee. Though she indulgently dismissed his comments as the rants of a kid, it could not have been all rhetoric and election season drama.

So, what does all this point towards?

As this writer had pointed out in an earlier column, one can be easily tempted to attribute it to either the Congress’ innate arrogance — or supreme overconfidence about the electoral outcome.

This is bothering Congress’ well wishers no end. One well-known scribe, who makes no secret of his dislike for Narendra Modi and his government, tweeted in exasperation, saying that the Congress seems to have given up on 2019 and “spurning meaningful alliances in Delhi & elsewhere, Congress … (is) utterly suicidal”

However, I would like to credit Rahul Gandhi’s mentors from amongst the Congress veterans with greater strategic foresight. They surely understand that if Rahul misses the boat a second consecutive time in 2019, it might put his political career at serious risk. Nothing can guarantee that sitting in the opposition benches, even with a number that is certainly going to be higher than the 44 of 2014, will boost Gandhi or the Congress’ long-term prospects.

Under the circumstances, the best-case scenario for the Congress would be a weakened BJP in Parliament. In such a situation, as the likely largest opposition party, the Congress can work towards a post-poll alliance with members of the truncated Mahagathbandhan, as well as some fringe elements of the NDA.

The problem of a pre-poll alliance would have been two-fold. First, the Congress would have to give up seats in the states where it is best positioned for seats — namely, Madhya Pradesh, Rajasthan, Chhattisgarh and Punjab. What it would have got in return from the SP and BSP in Uttar Pradesh and the TMC in West Bengal, where it is on a relatively weaker wicket, would not have compensated for its sacrifice in the other states. In Bihar, Karnataka and Tamil Nadu, the Congress has stitched up deals well, getting more than a fair share of seats for itself.

Secondly, if it were to join the Mahagathbandhan now, Congress would be one among equals — the choice of Prime Minister, in the event of the BJP not being able to form the government, would be wide open. This had already been indicated by Mamata Banerjee and others. However, if Congress emerges as the second largest party after BJP, it can try and forge a coalition from the driver’s seat. That is definitely what Congress stalwarts — not temperamentally suited to being a junior partner — would like for Rahul Gandhi.

Therefore, in balance, Congress’ approach is pragmatic and tempered with realism. With a tough fight in hand at Amethi, what Rahul Gandhi needs is an assured berth in the Lok Sabha. There is little room for excessive bravado when it is a battle for survival.

In the ultimate analysis, if he wins from both seats, all critiques of contesting from a safe seat with a high component of minority voters will be easily forgotten. 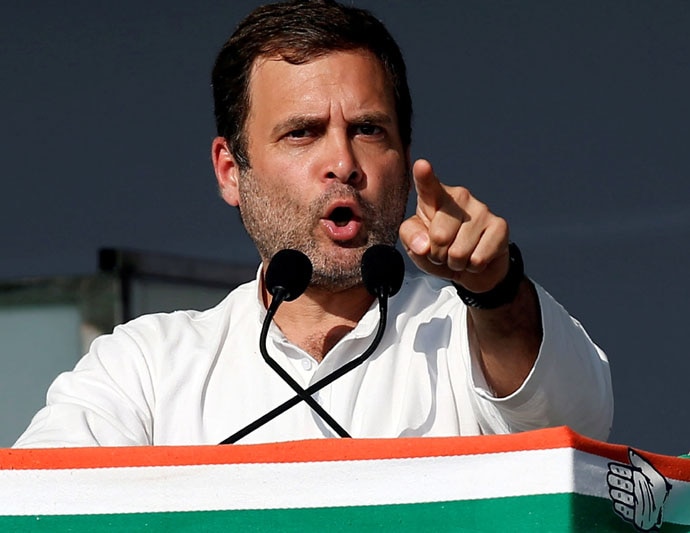 Taking them on: The BJP campaign has thus far been lacklustre. Rahul Gandhi stands a good chance to make a mark. (Source: PTI)

Besides, in the event of a non-BJP front forming a government, Rahul Gandhi will be able to stake his claim as the leader who has the endorsement of both north and south.

Narendra Modi and Amit Shah are not ones to take any challenge lightly. They clearly understand that the arithmetic is skewed against the BJP in a number of states. Whether one likes to admit it or not, the so-called 'chemistry' is not palpable as yet.

The BJP’s campaign has thus far been rather defensive and, if one may say so, somewhat lacklustre. There appears to be an over-reliance on nationalism and the anti-dynasty narrative.

With the “Main Bhi Chowkidar” campaign, Narendra Modi tried to turn the allegations of corruption and cronyism on its head. But, how far the “Josh” will be converted to “Votes”, cutting through caste and religion lines, is hard to predict.

So, the “compulsive contrarians” have no reason to become “premature pessimists”. The game is far from over — it is early days yet. The next couple of weeks should be exciting and well hold the key for May 23.

Post your comment
#Amethi, #Congress, #Rahul Gandhi, #Wayanad
The views and opinions expressed in this article are those of the authors and do not necessarily reflect the official policy or position of DailyO.in or the India Today Group. The writers are solely responsible for any claims arising out of the contents of this article.