Chora Shrot: The strong undercurrent for the BJP in Bengal which the TMC has sensed and is so fearful of

Many BJP supporters are silent, fearing TMC violence. Their votes could speak in favour of the BJP and surprise many watching.

I first noticed it among one of my 'acquaintances' in Kolkata. It was very curious behaviour — and that didn’t escape the eyes of many others along with me.

In one of our WhatsApp groups, this guy would forward messages that criticised the Trinamool Congress (TMC) and its chief Mamata Banerjee quite regularly.

This guy would also vociferously take part in discussions where we spoke about the rapidly increasing political violence in Bengal and how the faulty policies of the ruling party were ruining the economy of Bengal. Once in a while, the guy would forward some funny videos of both Didi and Prime Minister Narendra Modi. Some were truly hilarious, like this one example below (for representation purposes only, courtesy Special Updates):

So, you would naturally infer that the guy is basically a BJP supporter, right?

You are so wrong!

If you visit the Facebook profile of this guy, then it presents a completely different picture about him.

There — on his public Facebook profile — he is an ardent supporter of Mamata Banerjee.

There, he is seen sharing all the posts supporting Mamata Banerjee and there, he is posting updates about attending meetings organised by the TMC.

So, what’s the deal? Why is this guy a totally different person on WhatsApp and another person on Facebook? This Dr Jekyll and Mr Hyde syndrome in him intrigued me — and I gathered up the courage to ring him one day.

What he told me was startling!

A trader in a small town, he is acutely aware of his business interests and that his shop might be vandalised if he is found out to be a BJP supporter. So, he maintains a very public Facebook profile where he is a TMC supporter and where he shares everything that the party puts out on social media. The whole neighbourhood also knows him to be a TMC supporter. In his shop too, he hangs a framed oversized selfie of him with a TMC leader.

But on private WhatsApp groups, his real persona comes out.

“On WhatsApp, I use a different number and name. Even if you get the transcript of the chat, you won’t be able to prove anything because the mobile number is registered to one of my staff. Facebook is public and directly linked to me. So, I use WhatsApp to let off steam and Facebook to maintain my political image for the sake of my business. I have to become my real self somewhere, isn’t it?” my acquaintance asks.

He maintains off the record that he is a closet BJP supporter.

This same man — my acquaintance — was a Communist Party of India (Marxist) CPI(M) supporter two decades back.

I subsequently checked with a lot of TMC supporters — many of them were curiously maintaining two personalities. Most of them — government servants and small traders mostly — have already shifted their loyalties from the TMC to the BJP but don’t speak much about it.

We have heard about the fear among the rank and file of the TMC that 'outsiders' are being brought over to West Bengal in the wake of election campaigning. This claim of chief minister Mamata Banerjee and her supporters has surprisingly found resonance in arch rival, the CPM, as well.

Do you really think it is true?

That the BJP is bringing in people from Gujarat and Maharashtra to give a fake image of its popularity in Bengal?

Is it really true that the people attending Narendra Modi’s rallies are from outside the state? Take, for example, the recent Modi rally in Diamond Harbour a few weeks back.

Here, you can see people giving him a salute using their mobile torches. Are all the people seen below actually Gujaratis mobilised to Bengal just to boost the BJP's image?

A wonderful evening at Diamond Harbour in West Bengal. BJP’s popularity is rising and so is Didi’s nervousness. pic.twitter.com/ehvlrtItax

Absolutely not. These are people from Bengal.

They are all BJP supporters but many of them in their public appearances pretend to be TMC supporters. This is a classic case of what Bengali political journalists would call a “Chora Shrot”. Translated in English, it may be called an 'undercurrent' — but that doesn't convey the proper meaning in full. 'Chora Shrot' as it is understood in Bengal is actually a normal flow of water on the surface and visible to the naked eye, but when you step into it, you feel that there’s a strong undercurrent which is enough to drown you.

This word is used in the arena of political reporting when the picture looks like something but in reality, it is something else.

In my opinion, in Bengal, we are seeing the phenomenon of "Chora Shrot", where large number of BJP supporters are actually pretending to be TMC supporters.

I think the reality of this phenomenon will come out on May 23 when the election results will be announced and the BJP will grab a record number of Lok Sabha seats from Bengal.

If you feel that this phenomenon is unique to Bengal, let me point something out to you.

In Jammu and Kashmir too, you see a more pronounced manifestation of this 'undercurrent' where many BJP supporters actually hide the fact and pretend to support some other party.

Look at this video below, taken from a rally in Srinagar where the attendees of a BJP rally are hiding their faces, lest their identities are revealed.

BJP workers hide their faces during a party workers convention ahead of Lok Sabha polls in Srinagar. pic.twitter.com/bQz9B5wTrC

In my opinion, TMC has already sensed a super-strong Modi undercurrent and hence, has lost its sense of reasoning. The TMC is also at their wits' end about how to counter the narrative of the BJP that is rapidly gaining public support and traction.

So, what have they come up with as a counter-narrative? Well, that the BJP is a party of 'outsiders'. They claim it is not essentially a Bengali political party which has its roots in Bengal. The party mainly represents the Gujaratis and Marwaris, the entrepreneur class of India.

Apart from the fact that the Marwaris are the lifeline of Kolkata's economy, is it really true that the BJP doesn't have roots in Bengal?

Well, as per documented history, the BJP's roots and foundations both are in Bengal. The founder of the BJP is widely regarded as Shyama Prasad Mookerjee, the founder of the Bharatiya Jan Sangh in 1951 — the party from which the BJP literally originated. 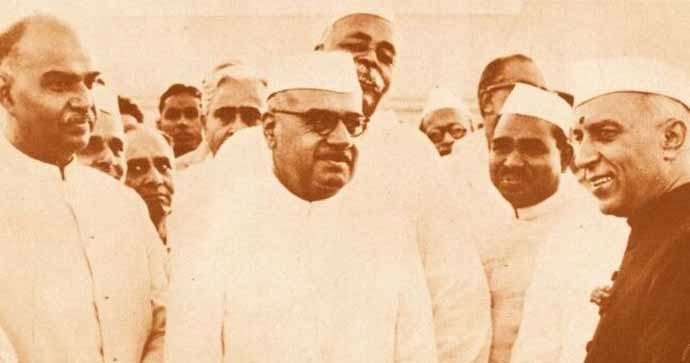 Besides Mookerjee, there's only one man who became president of the Bharatiya Jan Sangh twice (1956–59 and again in 1964). His name is Acharya Debaprasad Ghosh. Acharya Ghosh was a mathematician, linguist and a journalist in Kolkata. He is also the longest serving opposition party leader in Indian political history.

The second last president of the Jan Sangh was Atal Bihari Vajpayee and he was succeeded by Lal Krishna Advani who pioneered the transformation of the Jan Sangh into the BJP after a poor showing in the 1980 elections.

So, do you think the BJP is a party of non-Bengalis? The truth is simple — Bengalis have stood tall and have left an invaluable and vital contribution towards the BJP, like others from different states. A Bengali is widely regarded as the founder of the BJP.

Before I end this piece, here's a curious bit of information about what happened after the very strange death of Mookerjee.

Mookerjee died in Kashmir under mysterious circumstances while in custody of the Jammu and Kashmir government. It is alleged that he was given an injection of Streptomycin — despite informing the jail doctor that he was allergic to the drug.

After his death, Jogamaya Devi (his mother) requested former Prime Minister Jawaharlal Nehru for an inquiry into his death. Nehru ignored the letter and denied the request.

The college situated on Shyama Prasad Mookerjee Road in Kolkata (very near her home), from where chief minister Mamata Banerjee graduated and first started her political career, is called Jogamaya Devi College.