Congress should not sink its boat by favouring one. BJP then will have the election on a platter.

If there is one thing that makes the BJP ecstatic in Madhya Pradesh before any election, it is those stories of disunity within the Congress.

Aware of the glee it leads to for the BJP, the Congress leadership had been attempting to at least put on a show of unity in the run-up to the elections.

Congress leaders in MP, or the big three — Digvijaya Singh, Kamal Nath and Jyotiraditya Scindia — had reached a tactical understanding of sorts, that they would not let CM Shivraj Singh Chouhan get the better of them this time, that their personal differences would not be the reason for the Congress remaining out of power any more.

But has this tactical understanding now stretched to its limits? Rahul Gandhi is only trying to balance leaders in MP for his party. (Photo: India Today)

There are signs of stress.

A few days ago, a video of Digvijaya began doing the rounds on social media in which he appealed to party men to remain united ‘even if their enemy gets the party nomination’.

The BJP — that had been waiting long for clear signs of stress between Congress leaders — jumped at the opportunity.

Chouhan offered his shoulder to Digvijaya, saying that the pain inflicted on the former CM was a doing of his own party men.

PM Modi, too, while interacting with party workers said that the Congress had three CM candidates in MP. 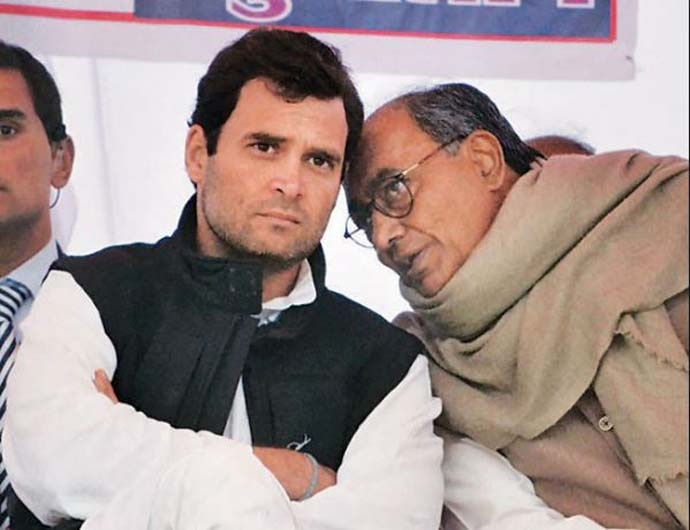 Minister Vishwas Sarang went a step further and said the Congress was low on sanskaars, because it did not know how to treat its senior leaders.

Of course, Sarang did not consider the way the members of the margdarshak mandal were being treated within the BJP.

A day later, Digvijaya was called by Rahul Gandhi to accompany him to Delhi from Gwalior where he participated in a successful road show. This is not the first time, the former CM felt marginalised during the campaign. During Gandhi’s Bhopal visit, a series of cutouts showing Congress leaders did not include his. The BJP yet again was very ‘upset’ at the treatment meted out to him.

Bhopal is also rife with theories that all is not too well between PCC president Kamal Nath and campaign committee chief Jyotiraditya Scindia either.

Issues include distribution of tickets and that the camaraderie on display whenever Gandhi and Scindia meet upsets Nath. The BJP is propagating all such theories. Post-ticket distribution is a crucial aspect that distinguishes the BJP from the Congress and therein lies the difference between victory and defeat.

While BJP has a better record of containing leaders who turn rebel when denied tickets, disappointed Congressmen just stay at home.

The result is that a part of the voters of the party don’t go to the polling booth to vote, which benefits the BJP.

There are also theories floating around in Bhopal that the Congress president will announce Scindia as the Congress CM candidate a week before polling — in a similar manner as Captain Amarinder Singh was named before the Punjab elections. 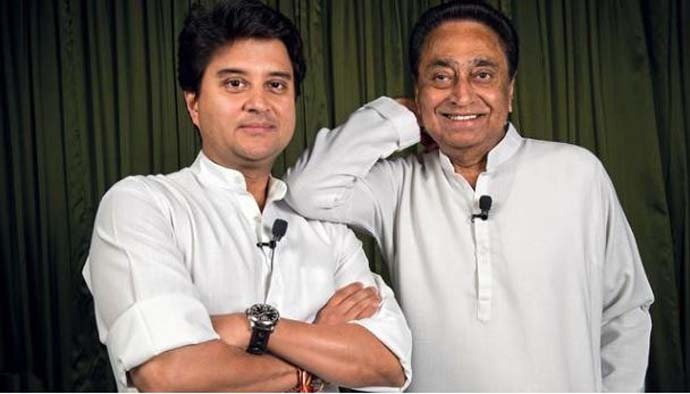 All is apparently not too well between Kamal Nath and Jyotiraditya Scindia. (Photo: India Today magazine)

But in Punjab, there was no other leader who could have been projected as the CM. Captain Amarinder Singh had led the election single-handedly.

This is not the case in MP.

Every leader has been asked to fulfil different roles, based on their strengths.

So, if Kamal Nath is overseeing the organisation and finances, Scindia is campaigning and Digvijaya is doing the back-room management; to prevent divisions among Congressmen. The bonhomie between Scindia and Gandhi is due to a comfort zone the two share. (India Today)

Chouhan’s popularity, as per India Today’s political stock exchange is intact at 48 per cent, higher than anyone in the Congress, be it Scindia with 32 per cent, Nath with 8 per cent or Digvijaya at 2 per cent.

The bonhomie between Scindia and Gandhi is due to a comfort zone the two share. Gandhi is only trying to balance leaders in MP for his party.

But one wrong step and the massive egos of Congress leaders would come into play.

BJP then has the election on a platter.

Will the Congress oblige?

Also Read: Madhya Pradesh elections: How people can get Congress and BJP’s attention to the Bhopal gas tragedy victims

Post your comment
#Congress, #Jyotiraditya Scindia, #Shivraj Singh Chouhan, #Madhya Pradesh Assembly elections
The views and opinions expressed in this article are those of the authors and do not necessarily reflect the official policy or position of DailyO.in or the India Today Group. The writers are solely responsible for any claims arising out of the contents of this article.