Narendra Modi has managed to bring upper castes to their knees for reservations, their backs now turned upon 'merit'

The biggest debate which continues to rule the minds of upper caste Hindus in India is not the religious divide or India being a secular country; it is, indeed, the anger against reservation and the demand to abolish it from institutions and Constitution. The other issues come later in the hit list of upper caste Hindus.

Most of us who are sons and daughters of this caste bracket have grown up in an environment which always had, and has, anger, jokes, logic and movements against reservation to the marginalised and socially weaker sections of our society. It has always been rhetoric around 'Merit' vs 'Reservation', from drawing rooms to wedding guest houses, tea shops, at workplaces and so on.

Jokes like — “Whom you would prefer as your surgeon in an OT; an upper caste doctor selected through merit or a backward/Dalit who got the opportunity through the reservation benefit?” — were the most shared ones among the upper caste Hindus. Operation theatre. And a 'caste' of characters. (Representative image: Reuters)

Support for the right to reservation for the socially weaker sections was always hated in our households. A few who supported it were minorities among their own families and community. They were not appreciated, supported and welcomed among their own people. Most of us, who have grown up in upper caste families, have similar experiences to share in this regard.

The more the quota increased for the socially weaker sections, the higher was the anger, hatred and anxiety among the upper castes. This divide was always as stark as the light of electric lamps and the fragrance of paddy fields. Since Independence, the one movement which witnessed the suicides of upper caste people was the one and only anti-reservation. The anti-Mandal protests saw suicides by those against reservation. (Photo: The Indian Express)

The rest of the movements were majorly supported and triggered by backwards, SC/ST and other marginalised sections of society. This divide fuels inter-caste rivalries and such violence resulted in the deaths of and damage to the Ambedkarwalas over decades across the country.

There has been only a one-line resolution echoed for decades by upper caste people — abolish reservation and respect merit. The rise of Dalit and OBC politics in the states and the nation made this resolution among the upper castes stronger and more determined. Red letter days in the socio-political history of Bihar, Rajasthan, UP, Punjab and many other states are witnesses to the brutality against these socially excluded and marginalised castes.

However, the latest 10 per cent reservation proposed and passed by the Modi government for the economically weaker sections of the general category has come as the biggest dent to this very resolution of the upper caste Hindus.

Though a few of them could be seen celebrating it on the roads and in their households, this is one of the biggest setbacks to the logic for abolishing reservation and respecting merit in jobs and education.

‘The moon in the plate’ reservation for upper castes has now brought upper caste people on their knees in front of reservations — an achievement which no one before Modi ever succeeded at. The strong voices like Youth for Equality and a few other anti-reservation movements are being silenced. They are now seen welcoming the move by the Modi government. 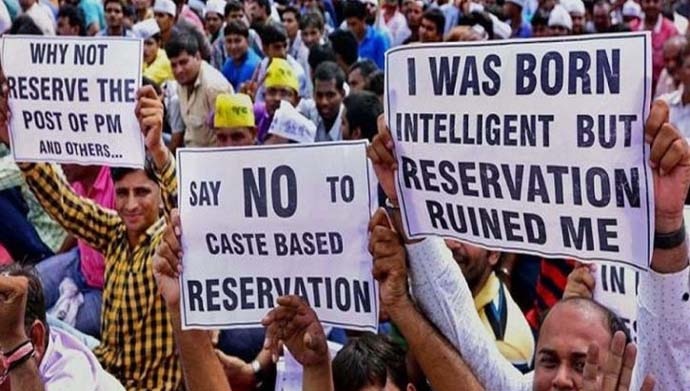 One can easily predict that the anti-reservation movements would be now seen as the movements demanding more reservation for upper castes, instead of fighting for abolishing such provisions. Has he achieved the unthinkable? (Photo: Reuters)

The 124th constitutional amendment has paved the way for this general category reservation. The PM has already started propagating it as a big victory for upper castes. However, the benefits are still ‘the supper for all when the food is over’ kind of gain. The unavailability of jobs, no efforts to employ people against vacant positions in the central and the state governments and the Himalayan rise in the numbers of unemployed youth make this development a peanut for an elephant kind of achievement.

The worst is losing the logic, the battle and the struggle against reservation. By the time upper caste Hindus will realise this, it will be too late.

Also Read: Why it's time to push for reservations in the private sector

Post your comment
#Quota, #Narendra Modi, #Upper caste, #Reservation
The views and opinions expressed in this article are those of the authors and do not necessarily reflect the official policy or position of DailyO.in or the India Today Group. The writers are solely responsible for any claims arising out of the contents of this article.