Farce Majeure: Why Pakistan’s 2018 General Election is a brutal mockery

Pakistan has had a succession of weak elected civilian governments — but most of them at least started out with a veneer of respectability. The government formed after the July 25, 2018 election would be the first to lack credibility from its very first day.

These elections are being held under the shadow of media censorship, arbitrary disqualifications of leading candidates, manipulation of political parties by intelligence services, and the mainstreaming of terrorists. PML-N supporters arrested after holding a rally to obstruct the arrest of Mohammad Safdar, son-in-law of of Nawaz Sharif.

Even by Pakistani standards, the interference of Pakistan’s military establishment is too blatant and too obvious this time for the world to ignore. If the establishment’s favorites win, they will not be viewed as having won the people's mandate. People's mandate? The interference of Pakistan’s military establishment is too blatant and too obvious this time for the world to ignore.

In case they somehow lose, the stage will be set for a new round of confrontation between the establishment and its protégés, on the one hand, and the political parties they tried to block, on the other.

In unprecedented panic on part of the establishment, no holds have been barred in denying space to Pakistan’s political mainstream — while mainstreaming extremists.

This is an unusual election because restrictions are in place on all moderate political parties previously preferred by voters, while extremists identified as terrorists by local and global authorities are free to participate.

Elections are usually preceded by robust debate in the media — but in this instance, draconian constraints on media have been imposed by the intelligence agencies. The electronic and print media have been harassed directly by the security services and even Dawn, the establishment newspaper since its founding by Pakistan’s founder, has not been spared. Its publisher recently described the media environment in Pakistan as "censorship".

If this trend continues people will stop trusting TV channels and their reporting. And not just one party. For today it’s PMLN tomorrow it will be ‘another’ - yes that’s what happens in Pakistan. Time for media unity to resist censorship. https://t.co/shiiUQTT6f

With Pakistani newspapers and TV channels currently mired in growing self-censorship and behind-the-scenes instructions coming 'from above' perhaps the one remaining relatively free medium is social media, especially Twitter -- but for how long?

Pakistan's journalists speak out against censorship. When under extreme form of media oppression, so many journalists break the silence, you know that all is not lost!#Pakistan#Geo#Media#MediaInChains#NotoCensorship#FreedomOfExpression https://t.co/tLuAbEXieK

Women journalists are particular targets of sexually explicit comments and threats of rape. Trolls on social media call them names that are psychologically harmful. Liberals are attacked ferociously with abuse from anonymous accounts, aimed at silencing their voices.

Speeches by former Prime Minister Nawaz Sharif and his daughter Maryam Nawaz — particular targets for elimination from the political scene — were taken off the air. Orders were issued to not air a live broadcast of Sharif's return to Pakistan or his subsequent arrest. Interviews with the Sharif family were dropped or censored after being recorded. Clampdown: Orders were issued to not air a live broadcast of Sharif's return to Pakistan or his subsequent arrest.

When Sharif returned to Pakistan to go to prison after being convicted on corruption charges, the caretaker government — charged with organising free and fair polls — cracked down on popular dissent in anticipation of his arrival. Hundreds of people were arrested in Lahore — many of them members of Sharif’s party, the centre-right Pakistan Muslim League (PML) — and cell phone service was suspended in parts of the city.

The ensuing unrest was not confined to Lahore. Media reports indicated arrests of protesters and shutting down of major intersections in several other cities across the country. Even politicians opposed to Sharif protested this attempt to deny the right to peaceful protest.

While Sharif and his daughter have been sent to prison, the deep state's mainstreaming of Pakistan's "good terrorists" (militant groups it treats as strategic assets against India and in Afghanistan) is well underway. Clearly, Pakistan's establishment deems allegations of financial wrongdoing a greater crime than terrorism.

The corruption case against Sharif was rammed through court without regard for legal niceties and he was disqualified from holding office even before he was put on trial. Meanwhile, Hafiz Mohammed Saeed, who is accused of being involved in the Mumbai terrorist attacks of 26/11, 2008, is not only free, but also actively campaigning in these elections for the newly created political party, Tehrik Allah-o-Akbar. Hafiz Mohammed Saeed, who is accused of being involved in the 26/11 Mumbai attack, is not only free but also actively campaigning.

No questions have ever been asked about the terrorist group's financing either — an issue that has led Pakistan to be put on the grey list of the United Nations’ Financial Action Task Force. Surely, if the goal is eliminating corruption, rather than re-engineering the polity, the corruption tied to terrorism also deserves some attention.

Extremists have not faced a media blackout and other restrictions that applied to the PML-N and other political parties. After successful rallies by Bilawal Bhutto Zardari, son of the assassinated former Prime Minister Benazir Bhutto, the centrist Pakistan Peoples Party (PPP) was also denied permission to travel and hold rallies, alongside denial of media access.

The Left-wing Awami National Party (AWP) has been the target of a terrorist attack on one of its major stars, Haroon Bilour, whose father had also been killed in a terrorist attack several years ago. That the pro-establishment Pakistan Tehrik-e-Insaf (PTI), led by Imran Khan, has faced neither restrictions, nor terrorist attacks indicates whose voters are being scared from coming out to the polls.

Ironically, the Supreme Court Chief Justice, Saqib Nisar, who has become a significant player in Pakistan’s politics and was instrumental in Sharif’s disqualification, had withdrawn official security from Bilour, making him an easier target for terrorists.

Another terrorist attack in Mastung, Balochistan — taking place on the day Nawaz Sharif and his daughter returned to Pakistan — killed 129 people, including a provincial Assembly candidate. 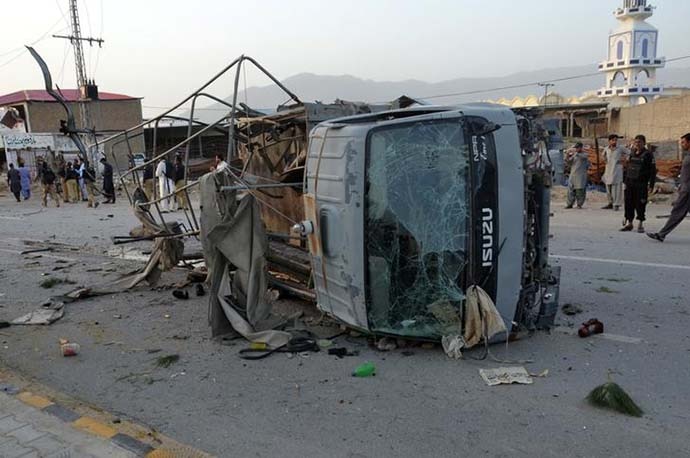 An attempt to put off elections: The attack which killed 129 people took place on the day Nawaz Sharif and his daughter returned to Pakistan.

The independent Human Rights Commission of Pakistan (HRCP) noted that “Despite the excessive presence of security forces in Balochistan, the capacity of militants to strike on this scale appears to be intact,” implicitly worrying that the terrorist attacks might be used as justification to put off elections.

The HRCP rightly asserted that "Election gatherings must not become killing fields." But then, many Pakistanis already suspect that the July 25 election is not meant to be an exercise in democracy — it is just a cover for continued imposition of a permanent establishment's choices on the people of Pakistan.

Also read: The politics of the upcoming Pakistan polls

Post your comment
#PML-N, #Nawaz Sharif, #Imran Khan, #Pakistan general elections
The views and opinions expressed in this article are those of the authors and do not necessarily reflect the official policy or position of DailyO.in or the India Today Group. The writers are solely responsible for any claims arising out of the contents of this article.