There is no reason to believe that things will be any different if now Modi goes to Islamabad.

The anticipation in the Indian media on whether or not Pakistan’s Prime Minister in-waiting, Imran Khan, will pull a Modi on Modi by inviting SAARC leaders to attend his swearing-in ceremony is a classic case of the tail wagging the dog.

It is also emblematic of how an idea based on nothing but a flight of fancy starts to get a life of its own once someone in the monster called media floats it and starts a debate on it. The so-called invitation from Pakistan’s newly (s)elected Prime Minister which has been conjured up out of nothing is now reportedly being seriously considered by the incoming government in Pakistan. And even before anyone sends the invitation to the Indian PM, there are confabulations on how India should respond if at all such an invite was to come. If this isn’t a theatre of the absurd, then what is? 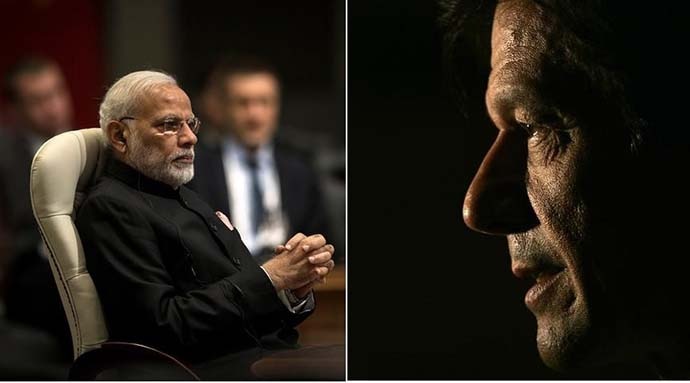 There was nothing in what Imran said that others before him haven’t.

There are any number of reasons why the Indian Prime Minister should play it very cool on Pakistan.

Unfortunately, he seems bent upon doing the opposite.

Once the ministry of external affairs had issued a statement on the Pakistan election results, nothing more needed to be done from the Indian side.

It was completely unnecessary for the PM to call Imran Khan, congratulate him and declare that he was “ready to enter into a new era of relations with Pakistan”.

Whether Modi was indulging in diplomatic niceties or he actually deluded himself or even was lulled into believing that Imran Khan would be a credible interlocutor isn’t quite clear.

There is a line of argument being floated in India that since Imran Khan is the ‘ladla’ (favoured child) of the military, everything he says will be what the Army wants him to say.

India, therefore, can be sure that what it sees is what it gets with Imran.

As a result, the old problem India faced in its dealings with the civilians in Pakistan won’t be there when it deals with Imran. But this is an utterly specious argument.

The Pakistan army has perfected the good-cop bad-cop routine and regardless of who the civilian is, he will play good cop to the Pakistan army’s bad cop.

This gives wriggle room to the military establishment and also softens foreign interlocutors who get beguiled into cutting some slack for the civilian dispensation.

This is a routine that has been done to death, and yet if India wants to once again suffer the consequences of this double-speak-double-game, then good luck to the Modi government.

The Indian PM would, however, be better placed if he resists the temptation to make overly friendly, grand and out-of-the-box gestures towards Pakistan.

Ideally, instead of picking up the phone and calling Imran Khan, Modi should have waited until Imran Khan was sworn in PM and then sent a pro forma congratulatory note through the Indian High Commissioner. For a seasoned politician like Modi to either get swayed or perhaps pressured into responding to the palpably insincere and trite references to India by Imran Khan in his victory speech is a little strange.

There was nothing in what Imran said that others before him haven’t. If at all there was any element of moving ahead it was quickly undone by Imran by referring to Kashmir as the core dispute and drawing a self-serving and completely fallacious comparison between the malicious and baseless accusations hurled by Pakistan on alleged Indian involvement in Balochistan with the very real evidence of Pakistani sponsorship of terrorism in India.

As for the elusive ‘invitation’, assuming it comes, then the best thing for the Indian PM would be to send a junior minister to represent India. When he became PM, Modi tried this tack to break the ice with India’s immediate neighbours. The initiative created the global splash that Modi wanted, but that was it. Apart from the spectacle created, the move had nothing to show for itself in terms of effecting any kind of a major breakthrough.

Worse, Modi tried on at least four other occasions to take an initiative with Nawaz Sharif, but they all came crashing down.

There is no reason to believe that things will be any different if now Modi goes to Islamabad. This is simply because there is absolutely nothing on the ground to suggest any change in Pakistan’s policy, viciousness, virulence, or pugnacity towards India. In fact, by allowing internationally proscribed terrorist organisations like Lashkar-e-Taiba to contest the general elections in violation of the commitments under the UNSC resolutions and FATF, and turning a blind eye to the huge facility being constructed by the Jaish-e-Mohammad in South Punjab, the message the Pakistanis have been sending is that India can stuff its policy on ‘talks and terror cannot go together’. If still the Indian government thinks it can reach out to Pakistan, then it is either badly advised or is utterly obtuse. Remember Mumtaz Qadri ( poster in left) who assassinated Salman Taseer, Governor of Punjab in 2011, and was hanged in 2016? (File Photo: Reuters)

Diplomatically too, having boycotted SAARC (for valid reasons) to now go for a tamasha of an oath-taking ceremony will be difficult to justify.

Finally, there is the security dimension. The sort of hate-mongering and pernicious campaign that has been carried out against the Indian PM, who is seen as a devil incarnate by most Pakistanis, makes it unsafe for him to travel to a country where security personnel are known to take it upon themselves to murder the people they are supposed to protect — remember Mumtaz Qadri? There is absolutely no guarantee that some jihad-infused loony won’t try something similar with Modi. It would, therefore, be best if India waits until there is some real sign of change in Pakistan before it gambles on yet another dialogue with the enemy.

Also read: His Master's Voice: Imran Khan is only the new mask on Pakistan's old face

#Pakistan Army, #Narendra Modi, #Imran Khan, #Indo-Pak Relations
The views and opinions expressed in this article are those of the authors and do not necessarily reflect the official policy or position of DailyO.in or the India Today Group. The writers are solely responsible for any claims arising out of the contents of this article.