A Formidable Challenge: The Mahagathbandhan is proving to be the BJP's nemesis in UP

The SP-BSP-RLD Mahagathbandhan in UP is giving the BJP a tough battle on each Lok Sabha seat. The cooperation between all three is also seamless. None of this is music to BJP's ears.

As the curtains draw on what has arguably been the most bitter and acrimonious election campaign in recent times, indications are that the BSP-SP-RLD alliance could prove to be a challenge to the BJP’s return to power.

In Uttar Pradesh, where the BJP breezed through 73 of the 80 Lok Sabha seats in 2014, the Mahagathbandhan seems to be giving the national party a hard run. From Saharanpur to Ghazipur and from Ghaziabad to Ballia, the BJP is facing a tough battle in each and every seat.

The 2014 election was all about Narendra Modi and polarisation along religious lines. However, this time round, the ground situation has changed — polarisation is now on caste lines.

The coming together of the SP, BSP and RLD has drastically changed ground realities in UP — it could have significant bearing on whether or not Narendra Modi gets a second consecutive term as Prime Minister. In addition to the numbers, what stands out is the chemistry and cohesion between the parties. This is seen not only in the leaders but also the supporters.

The transfer of votes has been smooth — workers from both sides have campaigned and worked together in all the constituencies. A lot of planning and organisation seem to have gone into this. Soon after Mayawati, Akhilesh Yadav and Ajit Singh decided to join hands, strict instructions were issued to office bearers of the respective parties and workers to ensure that the alliance works without hiccups. Joint meetings were held with the state, district and booth-level workers in every constituency. Leaders and workers from both sides have been sharing resources and responsibilities — they travel and campaign together. The top brass of the alliance is constantly communicating with each other and fine-tuning their strategy. The SP and BSP presidents are reportedly regularly in touch over the phone — with Satish Mishra apparently coordinating between the three parties.

The alliance leaders have been quick to adapt. They initially had planned only nine joint rallies, but halfway through the campaign, the plan was tweaked on seeing the response and increased to 20 joint rallies. 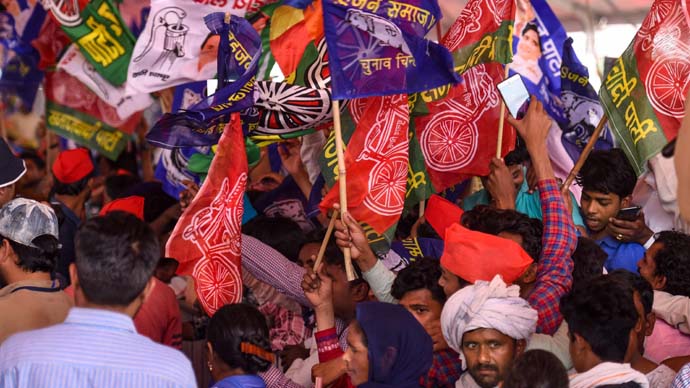 It is the coming together of not only different parties but different styles of functioning.

The BSP workers appear disciplined and organised — the SP lot is more energetic and enthusiastic. It is the SP workforce that is at the forefront, countering the in-your-face robust campaign style of the BJP. The minorities have been turning out to vote in large numbers, but have chosen to remain below the radar on the whole, in order to negate the BJP‘s attempts to polarise the election on religious lines. They appear to have left it to the Yadavs and the Dalits to do the heavy lifting for the alliance.

While Akhilesh was the one who took the initiative to reach out to the BSP, both sides now appear to have realised that the only way they can dislodge the BJP is by hanging in together.

Both Mayawati and Akhilesh Yadav have publicly committed to staying in the alliance at least till the Assembly elections in UP due in 2022, as was announced by Mayawati in the Ghazipur joint rally.

The union seems to be strong and enduring.

And that certainly cannot be music to the BJP’s ears.

Also read: No More Tears: Mayawati and Mulayam Singh bury their grudges. The national parties have much to worry about

#Ajit Singh, #Akhilesh Yadav, #Mayawati, #SP-BSP alliance
The views and opinions expressed in this article are those of the authors and do not necessarily reflect the official policy or position of DailyO.in or the India Today Group. The writers are solely responsible for any claims arising out of the contents of this article.