Is rainy England the right place for the game to be played? From teams getting one point each and upsetting the points table to un-resumed games and Duckworth-Lewis – a partially played World Cup is not a World Cup.

The ICC World Cup has thrown up a wonderful pageant of competitive cricket, far more worthy than an insidious Game of Thrones — a great celebration of the game, full of style and verve and a great reminder that this ever-evolving game will be played as long as players have the heart to play, aficionados the will to appreciate and fans the enthusiasm to love and admire the great interplay of talent and tension.

What feeds the World Cup is a competitive nationalism, each fan rooting for their own country (and sometimes for the other side).

The commentators, drawn from different countries, are equivocal in their appreciation with a subtle pride for their own team. The fans roar in ways alien to how the game was invented. Bugles blow, drums beat, and tomtoms tom away. The cameras zoom in on the inventive expressions of support, the bold and the beautiful.

There have been ugly scenes in the past, such as the audience booing the game or the umpires. And, of course, the Calcutta chromosome portrayed in bottles and rubbish being thrown on the field, falling short of arson and burning of the stadium. All that is, hopefully, in the past. It’s not just a game, it is death foretold; it challenged Yamaraj and claims eternity for posterity. No doubt, to be played on the Moon with lunar madness! 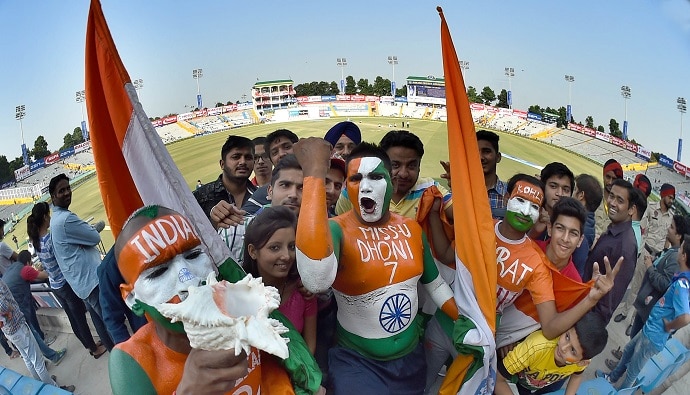 But it is a game, not a war. There have been great rivalries, laced with bitterness. But, India-Pakistan games go beyond desirable competition into a hateful jingoism. India’s decision not to play Pakistan on their respective home grounds almost became a decision never to play them internationally. Indeed, in this World Cup, there was a strong move by Hindu jingoists that India should not play Pakistan in the cup and forfeit the point by granting a walkover.

Even cricket legends thought the decision to play or not to play should be decided by the government. Does Prime Minister Narendra Modi decide whether India’s anti-Pak policy of muscular jingoism determines the game until some other politician decides otherwise? The only time a country was fully ostracised was when the racist regime of South Africa was outlawed from all sports. The charge was of turning the game racist. India’s justification abjures Pakistan’s anti-terrorism towards India, that is Bharat. Pakistan claims otherwise. If indeed terrorism is to guide our foreign policy, I would target Israel for racism and its terrorist plot to deprive Palestinians of their homeland.

Maybe I would also target the US. Leave that. If international sport is to bring out the best under conditions of healthy competition, politics should not determine the future of such exchanges. Both Pakistan and India play the hate game. We are not at war, but a war atmosphere exists. Both countries have issues with each other which will never be resolved by targeting hate. Nor is there room for pitting Hindus against Muslims. Or bringing hate to the cricket field or any other sport, or indeed, politics itself.

Fortunately, this World Cup is being played in a better atmosphere. It is for Pakistan to consider whether PM Imran Khan should upbraid Sarfaraz for fielding after winning the toss. Or, for calling him a ‘raillu kattu’— who gives up ignominiously in mind and spirit. Imran is one of the great cricketers of all time. His spirited concern is only to be appreciated, as is the angst of every supporter of a game that is to be won at all costs. For me, the true ambassador of the game is Wasim Akram who freely advises those who want to learn.

No doubt, there are people in India and Pakistan who bring abusive dislike to cricket. Apart from crossing from angst into a frenzy, it violates every essence of the human spirit at its finest. Don’t just blame Pakistan. Blame hardline ‘Hindutva’ which doesn’t just hate Pakistan but all Muslims for imagined injustices, blaming present generations otherwise willing to love to conquer the hate fed to them. In the new global imperialism which puts the planet and it's already deprived and exploited at unimaginable risk, there is much to fight for. Churlish cricket is not worth the fight.

The World Cup brings to the fore new talent including Kagiso Rabada, Eoin Morgan, Rashid Khan, and so many others, not to mention the compact and capable Indian team. But should the game be played in England noting Ashis Nandy’s comment: “Cricket is an Indian game invented by the English.”

England has never won the World Cup but it sports its chances this time. Not because they have home advantage but they are a good team. English fans are rooting for their cricket team to play on the home advantage. (Photo: Reuters)

But with all the washouts due to rain, is it the right place for the game to be played there? Why should New Zealand and India get one point each when they both played to win and upsetting India’s score on the points table? Why should Duckworth-Lewis prevent Pakistan of a shot at defeating India even if their chances were slim? Why should the games not resume or be played again? A partially played World Cup is not a World Cup.

One more thought for India. If India invests as much mind, spirit and resources in any endeavour as it does in cricket, its indomitable spirit will capture. As for cricket, there is a century-old poem which ends with the refrain: “Play up, play up. And play the game.”