I have just returned from the World Hindu Congress (WHC), September 7-9, Chicago, to discover that the event has been poorly, even unfairly, covered. One report, “Chicago Highlights”, focussed not so much on what transpired, but on the sweet surprise which greeted the delegates. Claiming that the welcome packet contained “soft and hard laddus”, it went on to explain their significance. The“symbolic of status of Hindus” was like the soft laddus, which could be “easily broken and swallowed”, while they actually ought to be like “strongly bonded” like the hard ones.

Actually, the welcome box had only the soft motichur laddus; the harder sweet was the famous ghee and besan Gujarati barfi, magaz. There were, besides, namkeen or savouries, so one can only wonder what they symbolised. This harmless report was contrasted by viciously prejudiced, “lazily polarised”, write-ups by those who evidently did not attend. In addition, there were some motivated and hateful but inconsequential protests by the usual anti-India and anti-Hindu fronts.

This Congress, second in the series after its inaugural in November 2014, attracted over 2,500 delegates and participants from over 60 countries. It was superbly organised by a team of over 200 volunteers under the able leadership of an organising committee headed by IIT-Kharagpur BTech-turned-sannyasi-activist, Swami Vigyananand, ably aided by Sriprakash Kothari, Raju Reddy, Abhaya Asthana, and Sham Seth.

A star-studded galaxy of speakers addressed the gathering, including vice-president M Venkaiah Naidu, who delivered an inspiring valedictory, and thespian Anupum Kher, who offered a moving inaugural keynote. The theme of WHC 2018 was Yudhishthira’s advice to Bhima in the Mahabharata (3.37.5), “Sumantrite Suvikrante” (Think collectively, accomplish valiantly). To go beyond deliberate distortions and misrepresentations, it is important to understand that the WHC is not a political caucus, but a global congregation of Hindus “to connect, share ideas, inspire one another, and impact the common good”. Held once in four years, WHC’s guiding vision is the quotation from the Bhagavad Gita: “Yato Dharmastato Jaya” (Where there is dharma, there is victory). Actually, this statement is also the motto of our Supreme Court and occurs in the Mahabharata as many as 11 times in different contexts and with slight variations.

Each WHC consists of seven parallel conferences, one each on economics, education, media, organisation, politics, women and youth. After attending several sessions and being both speaker and moderator in one, I can vouch that there was little negativity, aggression, or anger in the Congress. Instead, the mood was positive, optimistic and constructive. This was a happy and celebratory gathering, full of networking and friendship opportunities.

In addition, there were serious deliberations on the challenges and opportunities that Hindus face globally, as well as what we could do for the betterment of humanity. Nowhere did I see or hear cries or calls for narrowly sectarian agendas or hatred towards other communities. Harmony and cooperation rather than opposition and hostility characterised most sessions.

There should, however, be no ambiguity about who is behind the WHC. It is undoubtedly the brainchild of the Sangh Parivaar. Perhaps, that is why it evokes so much hostility and misunderstanding. The Chicago Congress was a combined triumph of the Vishva Hindu Parishad and Hindu Swayamsevak Sangh of the US.

The latter is an extraordinary organisation, led by the utterly dedicated and exemplary pracharak (full-time worker), Soumitra Gokhale, a soft-spoken engineer with steely determination, who has been leading HSS in the US since 1999. WHC 2018 was also supported by BAPS Swaminarayans, Art of Living, Chinmaya Mission, ISKCON, the Dalai Lama, Namdhari Sangat, Gayatri Parivaar, Bharat Seva Ashram Sangh, and others. I met several ordinary delegates in addition to well-known scholars and speakers. 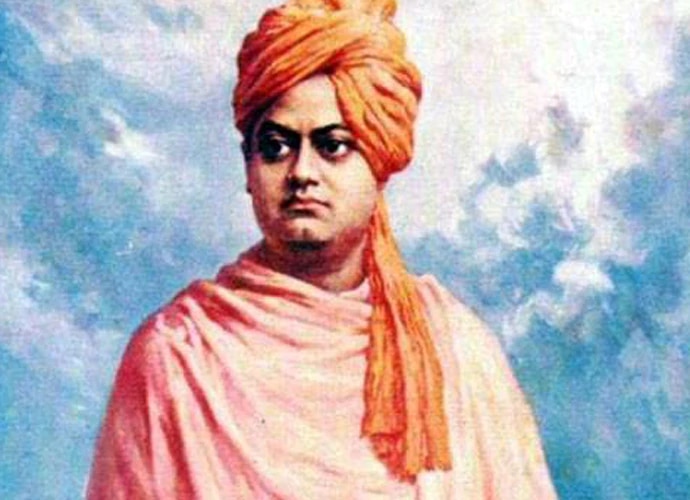 Ahead of the event, Avaaz Foundation, quoting Swami Vivekananda, issued a fullpage ad in The Chicago Tribune urging WHC attendees to protest the alleged disenfranchisement of four million Muslims in India. (Photo: Facebook)

They had come from many parts of the US at their own expense. Most were neither political activists nor deeply ideological in their orientation; they were, in fact, liberal Hindus, open to differing views, respectful of other religious and faith traditions.

It was surprising and dismaying, therefore, to see the event being demonised as violent, fascist or minority-hating by motivated critics, supported by a section of the media. Avaaz Foundation, quoting Swami Vivekananda, issued a fullpage ad (which reportedly cost $26,000) in The Chicago Tribune urging WHC attendees to protest the alleged disenfranchisement of four million Muslims in India.

As I write this, I am reminded that today is actually the 125th anniversary of Swami Vivekananda’s historic September 11, 1893, address at the Parliament of World Religions, Chicago. The WHC 2018 was held in Chicago to celebrate and commemorate precisely that decisive event in which Hindu dharma presented itself to the world as modern, rational, humane and pluralistic, encompassing diverse religious and faith traditions. Vivekananda’s call to action, “Practical Vedanta”, was a combination of sacrifice, activism and spiritual growth, meant to uplift and ameliorate both individuals and nations.

This day is also the 17th anniversary of the 9/11 attacks on the US which left 3,000 people dead. The WHC 2018 clearly represents tolerance, pluralism and cooperation rather of religious bigotry, hatred and jihadi violence. That is why I was disappointed to see it so deliberately distorted. When it comes to reporting on Hindu issues, where are the “highest standards of editorial quality, ethical standards & professionalism” and “due diligence, rigour, accuracy, fairness and integrity” that some of our leading media houses promise and proclaim to follow?