What's being cooked for Yogi Adityanath in Dalit homes?

The sudden bonhomie between the two otherwise warring outfits - SP and BSP - has rattled the BJP leadership.

Are our politicians actually naïve or do they really think poor Dalits are gullible?

Strangely they seem to believe that mere symbolic gestures can impress their target audience, who would go head over heels for them. Well, symbolism could pay dividends in the times when awareness levels among the "cattle class" dumb driven electorate used be very low. People could be easily fooled by hollow gestures and votes could be conveniently garnered through cheap gimmicks. 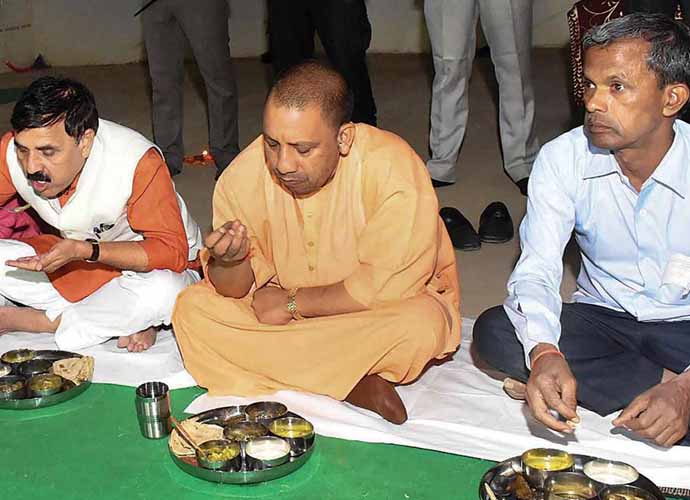 Thanks to education and increased awareness on account of the information and technology revolution, a large chunk of even the lowest in the social rung can see through such games. And politicians have to be really naïve not to understand that.

What came as a bit of a surprise was one such gesture by none other than UP chief minister Yogi Adityanath, whom one would expect to be less naïve than many others. The saffron clad chief minister, who has a background of being the people's man and someone believed to understand the pulse of the people, made a huge display of sharing a meal with a Dalit family.

Yogi Adityanath's public relations machinery left no stone unturned to spread the word about his eating in the company of Dalits. The pictures of the saffron clad chief minister munching food in a Dalit home in Kandhai-Madhopur village in Pratapgarh district of Eastern UP, were carried prominently by all newspapers. And what was systematically highlighted was that the chief minister also held a chaupal with the local villagers.

What no one seemed to notice was Adityanath's choice of the host - a well-off Dalit family. Unlike a common Dalit's house, this one seemed to have everything in place. Even though the CM chose to squat on the floor to have his meal, this was a house where every comfort of a normal middle-class house were clearly available.

Two days later on April 26, Adityanath repeated the exercise by visiting yet another Dalit house for a meal at Mehndipur village of Amroha district in western UP.

What became even more glaring here was that the gram pradhan was handpicked to play the host. Apart from being close to the ruling party, the Dalit gram pradhan also hailed from an upward class family, enjoying all basic comforts.

Yet, the government made a big deal out of the fact that the host was a Dalit.

The BJP has been in an overdrive to woo Dalits as well as a section of the other backward castes ever since circumstances brought sworn adversaries, Samajwadi Party and Bahujan Samaj Party (BSP), under a common umbrella. The sudden bonhomie between the two otherwise warring outfits has rattled the BJP leadership that was so far sitting pretty. Hoping for yet another smooth sail in 2019, when Narendra Modi's political destiny would be put to test, BJP is now busy reworking its tried and tested winning strategy - polarisation of Hindu votes.

The nearly two-and-a-half decade old acrimony between SP and BSP had kept the Dalits and OBCs divided allowing BJP a free-run, especially since the Congress remained down in the dumps over this long period.

And the fact that this could happen solely on account of the most unexpected SP-BSP alliance, has compelled BJP to get down to brass tacks.

With Mayawati and Akhilesh Yadav having made it loud and clear that their partnership would continue well into the 2019 general elections, the BJP has got down to devising news ways and means to counter the alliance. What seems to be on top of their priority now is the age-old policy of "divide and rule".

Yogi Adityanath has already spelt out his plan to divide the OBCs into three categories - backwards, most backwards and extreme backwards. Likewise, he also proposes to forge a divide among Dalits - jatavs and non-jatavs. Obviously, the idea is to give the impression that since Yadavs hog away bulk of the OBC reservation quota, a division in the reservation will ensure equal share to the deprived OBC lot. The division of Dalits into different categories is to send a message that being a "jatav" herself, Mayawati had deprived the non-jatavs.

The strategy has a precedence in the state of Uttar Pradesh. Union home minister Rajnath Singh used it when he was UP chief minister. Akhilesh Yadav too used it during his stint as chief minister. But it could not get a stamp of the Union government at that point of time. Since BJP happens to be in power in both Lucknow as well as in Delhi, it may be easier for Adityanath to see his plans translating into reality.

Meanwhile, having a meal in a Dalit home is the beginning of this "divide and rule" exercise. Whether it pays the targeted dividends, will depend on how gullible the OBCs and Dalits continue to remain.

Also read: Ahead of 2019 polls, Maharashtra CM has a plan for Mumbai

Post your comment
#BJP, #Dalits, #UP by-poll results, #Yogi Adityanath
The views and opinions expressed in this article are those of the authors and do not necessarily reflect the official policy or position of DailyO.in or the India Today Group. The writers are solely responsible for any claims arising out of the contents of this article.