Zakir Naik not to be deported: Not heeding India can cost Malaysia dear

Reports from Kuala Lumpur that Malaysian Prime Minister Mahathir Mohamad has ruled out the extradition of controversial Islamic preacher Zakir Naik to India have come as a dampener for Indian security agencies.

The Indian authorities were buoyant about the likely deportation of the Mumbai-born televangelist to India, after he relocated to Malaysia in 2017 from Saudi Arabia, where he had been staying since 2016. Naik has a huge fan following across the world, with adherents mesmerised by his rhetoric. The 52-year-old has the magic to convince his audience that Islam is the only religion for peace, and through subtle articulations, he manages to show other religions in adverse light, highlighting the ills of their faith.

Clinically speaking, Naik has the proven capacity to have at least some people embrace Islam through "on-the-spot" conversions, essentially charmed by his words, that are undoubtedly hate speech and arouse communal passions. He has inflicted enough harm on the Indian society through his speeches, polarising the society along communal lines. His powerful propaganda medium — Peace TV  — has contributed substantially in injecting venom into the minds of many young Muslims.

The incalculable damage to the young minds was easier to spread as Naik stepped up his propaganda just when the IS was on a spree to radicalise youth.

Now the point is why is a moderate and mature statesman, Prime Minister Mahatir Mohamad, supporting Zakir Naik and vehemently opposing his extradition?

India’s hopes had been visibly raised when Mahathir Mohamad came to power a couple of months ago. With the Malaysian PM's stance of curbing Islamic terror with an iron hand, India had hoped Naik’s deportation was only a matter of time. India and Malaysia have an extradition treaty in place, so there doesn’t seem to be any procedural hindrance in implementing it in the larger interest of peace and tranquility in the region. 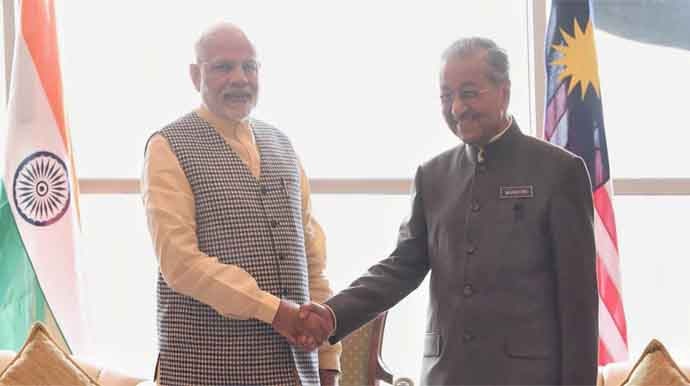 In May, PM Modi was among the first leaders to meet Malaysian Prime Minister Mahathir Mohamad after he came to power.

In support of his stand, the Malaysian PM says Zakir Naik enjoys a "permanent residency" status in Malaysia, and hence cannot be extradited. This is only a technical and frivolous point and Mahathir Mohamad, the visionary that he is, can act against the televangelist if he wants to.

It would seem by implication that Mahatir Mohamad and his government are caving in to the pressure of the local Islamic radical lobbies, who had helped Naik relocate to Malaysia. One would hope and expect that Malaysia is not under undue pressure from Saudi Arabia to not extradite Naik. As is common knowledge, Saudi Arabia is the biggest exporter of Wahabi Islam, indoctrinating thousands of youths.

We recently saw a slew of arrests in Malaysia of those suspected of being complicit in terror-linked activities. This makes our case of demanding extradition stronger. It’s equally pertinent to mention that Prime Minister Narendra Modi was in Malaysia not very long ago and it is assumed that he had convinced his hosts about the dangers that Naik poses to peace wherever he goes and preaches his hate agenda.

Also, Indonesia, in the proximity of Malaysia, recently saw terror attacks carried out by one family, including some juvenile members. This clearly exhibits the extent of radicalisation Indonesia has gone through. Fortunately, the government in Jakarta is tough and comes down heavily on perpetrators of terror. Another country, Brunei, has also witnessed indoctrination, that can easily spill over to Malaysia. Singapore has already tightened measures to see that the hate ideology of Naik does not reach the island.

Importantly, Malaysia’s border with southern Thailand continues to be a dangerous zone, as witnessed on multiple occasions through incidents in Narathiwat, Sathorn and other troubled spots. In light of this, Zakir Naik’s continued presence in Malaysia may see renewed activities of indoctrination and an eventual spurt in terror attacks.

Zakir Naik may prove to be the Frankenstein of Malaysia, if left unchecked. In all fairness, it must be said that Indian security and investigative agencies, including the National Investigative Agency (NIA), are highly professional organisations compared to their Malaysian counterparts. It would be in Malayasia's interests to heed the advice of the NIA and the government of India.