Delhi Daredevils is the worst performing team in IPL history, why do they even play?

Q: How does one know that the playoffs have started in the Indian Premier League (IPL)?

A: Delhi Daredevils get knocked out!

It has become an annual occurrence — like the changing of seasons and the coming of Rahul Gandhi memes. Delhi Daredevils buys strange players, fields absurd teams, and then, “whoooooooooooooooosh” — they crash out of the tournament like a rogue meteor on a strange planet.

The facts don’t lie. Delhi Daredevils have never won the IPL in its eleven-year history. They made it to the qualifiers just thrice, and got eliminated in the first round for eight years. 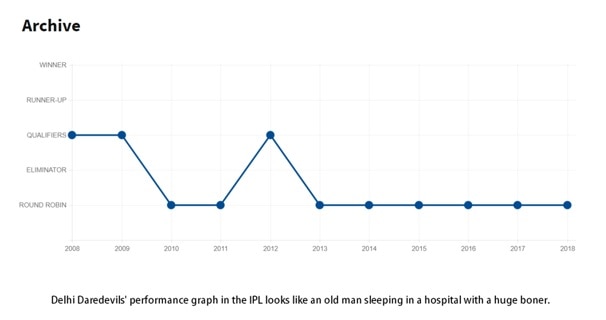 While other teams look focused and committed, the Delhi Daredevils looks like a college team that had Bhang on the ghats during a trip to Benares. I always imagine that the Delhi Daredevils dressing room must be the greatest dressing room in the world — there must be hi-fi amenities and the most luxurious fittings. How else can you explain their hurry to get back to it?

I perform a cricket based standup comedy show — Silly Point — and in our tour across different cities, we often find that Delhi fans embarrassed to admit the fact. I think most Delhi fans have migrated to other teams, and the only ones who remain meet in a secret dungeon in Gurgaon.

1. Lack of a face: Every team has a face — the owner who cheers for the team, who shares pictures and videos with fans, keeps the enthusiasm going. There is a well oiled machinery in place that brings fans to the grounds. Like its government, the Delhi team enjoys no patronage from the Centre. 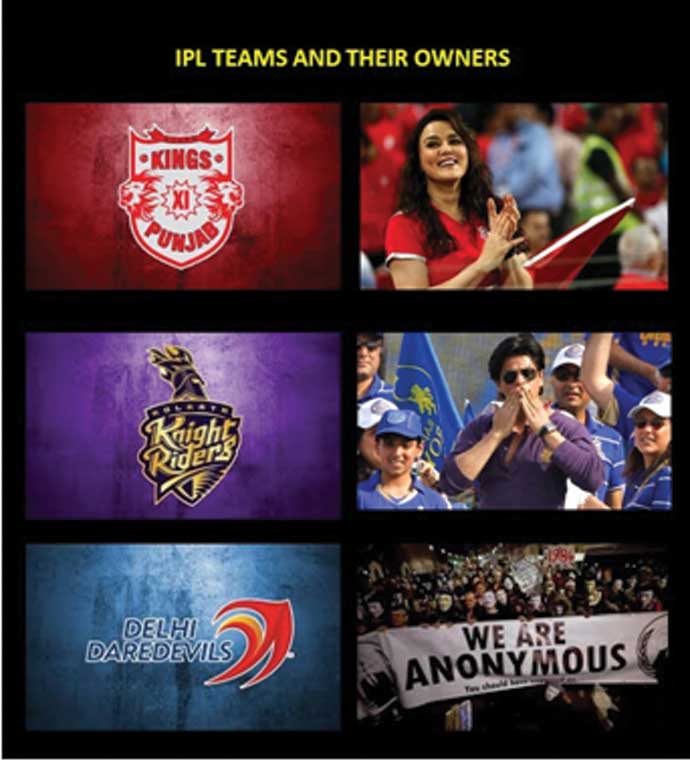 Nobody knows who owns the team, who makes the decisions — the team is run like the NREGA scheme by the government.

2. Shabby purchases: Smart teams purchase carefully. Look at Hyderabad,for example. They pick unknown players at low prices, groom and train them at the highest level, and then reap the benefits. Delhi Daredevils go about their auctions like a family shopping for a shaadi. They spend insane amounts for cricketers who never perform. Mahela Jayawardene for 9 crores, Irfan Pathan for 12 crores, and Yuvraj Singh for 16 crores!

3. A new captain every year: Since players come from around the world, you need a strong leader around whom the team can rally. Delhi Daredevils has had 11 captains so far (including stand-in captains), and this list also includes James Hopes.

I think Hopes was reflective of the team’s feeling, more than an actual strategy.

4. Lack of a fan base: While every team in the IPL has its home base of hardcore fans, Delhi fans will cheer for whoever is visiting Feroz Shah Kotla to play. They cheer for Kohli, Dravid, Dhoni, deVilliers — basically anybody who will provide them good cricket, starved as they are of it. Would you even blame them? Why would you scream and cheer for a team that hasn’t performed for a decade?

Most of the people in Delhi matches are either kids, or people who have clearly won a free pass. You can see it in their eyes — the glazed, stoned look of someone watching the 4pm feature film on Doordarshan.

The commentators and panel experts have my sympathies. You have to sit through the matches, pretend that it’s going down to the wire, and is an exciting night of cricket.

I am curious to know if IPL teams have a performance review. As in, if there’s a team that hasn’t performed for over a decade, do they get demoted?

Meanwhile, the Double-D have two more matches (at the time of writing this article) — against Chennai and Mumbai. I wish I could say there could be a twist in the tale.

Come on, Delhi. Your city sits at the centre of Indian history. Wars have been fought, heads have rolled, entire cities have been slaughtered. You owe it to the fans of the city. Just for once, play like a professional cricketing team. And not a group of baraatis who arrived a few hours early!