How the cricketing legend Sachin Tendulkar on April 24, 1998 turned god

It was on this night 20 years ago that India possessed something that was better than anything, anybody, anywhere else in the world.

It is difficult to wrap my head around our love for Sachin Tendulkar.

The most-loved Indian alive today, and yet, there are no marquee moments associated with Sachin - no last ball sixes, no big finals. Sachin has been loved for his hard work, integrity, his machine-like ability to conquer and accumulate.

I have often wondered what makes Sachin so loved. If it was about breaking records and scaling new heights, Azhar was on the top of every cricketing record. If it was about winning matches singlehandedly, there aren’t many innings one could point to. I could list off more matches that Virender Sehwag has singlehandedly won for India. May be we love Sachin because he is an adarsh Indian baalak. Someone who youngsters can look up to, older people can love, and the middle-aged can grow old with — like a close friend.

Which is why we are touchy about Sachin. As a stand-up comedian, I harp on religion, politics and sex — but crack a joke on Sachin and you can feel the room stiffen up. 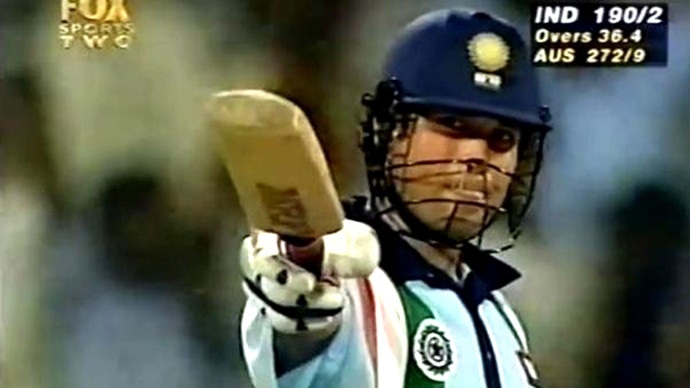 On April 24, 1998, Sachin scored a century, won the match, the player of the series, got himself an Opel Astra, and turned 26. Photo: Screengrab

We are oversensitive when it’s Sachin Tendulkar.

Exactly 20 years ago, on this day, the perfect Bollywood film played out in front of us Indians. Like a pulp movie of the ’90s, it happened to be the hero’s birthday too!

To better understand this article, you must possess a fair idea of the late ’90s. Months earlier, Vajpayee had scraped through a majority in the Lok Sabha — a shaky dias that would collapse in a few months.

India was getting comfortable with money, and colour TVs weren’t a rarity any more. Cable TV had dislodged Doordarshan from its position, and millions of Indians gaped at colour TVs. Censorship hadn’t spread its poisonous tentacles, and teenagers could turn on FTV for a biology lesson.

The triangular tournament was being played with Australia and New Zealand. The Indian team of the time was a musical chairs game — players vanished before you could say “Venkatpathy Raju”. Sachin was the lone salvation — a knight in shining armour surrounded by cavemen wielding clubs and blunt knives.

Sachin hadn’t attained God status — articles would often use the phrase “the three best batsmen in the world — Sachin, Lara, and Ponting”. It was on this day, 20 years ago, that Sachin established himself as the best.

I was a schoolboy standing at the threshold of puberty. The reign of the older Gods — Sachin and Azhar — was being questioned by the New Gods: Raveena Tandon and Madhuri Dixit.

My family considered cricket a distraction, and I was sent to help out at a nearby Sai Baba temple. The television was locked up for good. Which meant that I had to crouch next to a radio to keep abreast of happenings.

Watching television is a social experience — friends, family and high-fives. But crouching over a radio is very personal — you need an active imagination! I had to learn the names of field positions. The commentator would exclaim “Mid On ke taraf uttha diya aur YEH BSNL CHAUKAA!”, and I would have to recreate the details in my head.

But if you closed your eyes and focused hard, you could hear noises from the stadium surging like gigantic waves in the background.

That summer was an epic released in two parts.

The first played out on April 22. Chasing, India needed 254 to qualify for the finals. Sachin batted like he was possessed — a blistering knock of 143 cut short by a dubious decision.

And then two days later, it was time for the finals. I had ditched the radio and found a colour TV. Before shopping malls entered India, kiraana shopowners used to turn their TVs a little to the right, so that swarms of fans could watch the match.

When Sachin stepped out to bat that night, you could sense it coming. The commentary by Tony Greig — the Narada to our Vishnu — was on fire. The umpires were Steve Bucknor and Javed Akhtar, not surprising considering the poetry that was on offer.

Sachin drove and he cut. This was back when he could play the Lofted Straight Drive without cramping up or grimacing. He used that shot against every Australian bowler, shoring up a second consecutive century that would take India to victory.

In a few years, match-fixing would break out like an ugly plague. India would go on to become a cricketing superpower. Sachin would have a long, fulfilling career ahead of him.

But after that night 20 years ago, nobody asked the question about Sachin, Lara, or Ponting.

It was on this night 20 years ago that India possessed something that was better than anything, anybody, anywhere else in the world.

#Team India, #Cricket, #Sachin Tendulkar
The views and opinions expressed in this article are those of the authors and do not necessarily reflect the official policy or position of DailyO.in or the India Today Group. The writers are solely responsible for any claims arising out of the contents of this article.