Ashwin Mankading during IPL: Why some people are taking the moral high ground

Shane Warne criticising Ravichandran Ashwin is laughable. Someone should remind him of his on-field controversies. Others must back off too.

Yes, I earlier wrote, cricket is a gentleman's game. But where are all the gentlemen?

This was when the Perth Test saw a lot of heat and action between India and Australia with sledging between captains Virat Kohli and Tim Paine. But with the Indian Premier League (IPL) season on, the game changes — and so do the rules. Rajasthan Royals began their IPL 2019 journey with a match against Kings XI Punjab. It was not just going to be a highly entertaining game as KXIP captain R Ashwin was up against the most formidable side, Rajasthan Royals. It had much more in store. Action, reaction — and, above all, 'Mankading'.

So, here's what exactly happened during the Rajasthan Royals versus Kings XI Punjab match.

During his run-up, Ashwin sensed that Jos Buttler was backing up too far. He paused during his bowling action and slowly removed the bails from the non-striker's end. Buttler was left fuming. TV replays showed Buttler was short of the crease and the third umpire ruled him out. The jargon for this run-out is ‘Mankading’.

What exactly is 'Mankading' and how did it come into play? Back in 1947-48, bowler Vinoo Mankad stirred up a controversy during India's tour of Australia when he paused during his delivery and removed the bails at the non-striker's end to run out Bill Brown. It stirred up a storm back then in Australia — and 'Mankading' came into existence.

Now the debate is open over whether this is legitimate or a violation of cricket laws. Many still consider this unfair and unsporting. According to law 41.16, if the non-striker's end is out of his ground while the bowler has begun his run up, it is well within the rights of the bowler to try and attempt a run out.

So why is everyone now busy bashing Ashwin? 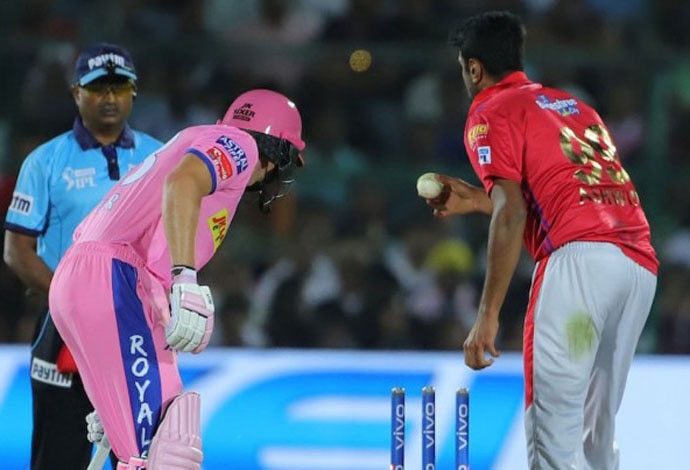 Suddenly, fair play and how Ashwin should hold up the integrity of the game as a leader is being discussed.

This is fair play! Ashwin hasn't done anything that is illegitimate — he has neither pulled out a trick which no one has ever applied. This is not the first time Buttler was run out by Mankading. Sri Lankan bowler Sachithra Senanayake got him in 2014 at Edgbaston.

The debate rages on and opinions on social media are divided. Former Australian cricketer Shane Warne went on a rant today and became moral police, giving lectures on how Ashwin should have behaved and what is not expected of him, blah blah...

Last point on the embarrassing & disgraceful act of @ashwinravi99 ! This win at all costs mentality has got to stop & the integrity of the game along with the spirit of the game must be of the most importance, as we need to set examples to the young boys & girls playing cricket !

Look who's talking — someone please remind him of his on-field controversies. He wakes up to Mankading by Ashwin, reminds himself that he is the brand ambassador of Rajasthan Royals and goes on a rant.

And what is this thing about if Kohli would have been run out the same way by Ben Stokes — would it be okay?

Sorry - one more thing to add. If Ben Stokes did what Ashwin did to @imVkohli it would be ok ? I’m just very disappointed in Ashwin as I thought he had integrity & class. Kings lost a lot of supporters tonight. Especially young boys and girls ! I do hope the BCCI does something

Of course! It would remain the same for all. Wake up, Mr Shane Warne — this is IPL and it's fair competition. It is all about the power, the grit of the game and its players. It is all about going there in the middle and winning each game. Everyone wants to win that trophy. Have you forgotten Kolkata Knight Riders’s theme song, 'Korbo, Lorbo, Jeetbo Re'?

Let's not just start questioning Ashwin's role as a wonderful bowler and, above all, Punjab's captain. He did what the need of the hour was — and was sharp enough to notice Jos Buttler backing up.

So why hang him for nothing?

It's all about winning IPL. Everything else is self-righteousness.

Also read: No play with Pakistan: We Indians must choose between national pride and our martyrs' sacrifice versus a game of cricket

#Mankading, #Ashwin mankading, #Ipl 2019, #Ravichandran Ashwin
The views and opinions expressed in this article are those of the authors and do not necessarily reflect the official policy or position of DailyO.in or the India Today Group. The writers are solely responsible for any claims arising out of the contents of this article.