Why Virat Kohli is the greatest chaser cricket has ever seen

It would be wrong to say that it’s too easy for Virat Kohli. If you look closely at most of his innings, he hardly ever takes the easy way out. If anything, he takes the rough way, replete with thorny bushes, sudden drops, a flight of steep steps, abrupt darkness, a classic video game chase on a higher level. It’s another thing, he’s mastered the chase. To borrow, Sunil Gavaskar’s new oddity, he’s a “chase master”.

Much like an obsessive teenage kid, he’s mastered this game but refuses to tire of it or the approach that ushers him to the top score each time.

Rather than be an excited 20 something, quite bored of his toys, Virat’s prime toy is the chase. And he wants to play it, more or less the same way each time.

Virat doesn’t want a new car. He doesn’t want to step up or simulate a highway when he’s driving in the street, he knows the city limits and he’s always within kissing distance of them - if and when he breaches the limits, no cops, no cameras, nobody can tell. For all you know, he might well be intoxicated but the breathalyser has been breached by him.

Virat has breached the chase code. It looks simple because he has. That he refuses to relay this truth, to even himself, is what makes the breach appear so seamless. Nothing is taken for granted. Not the boundaries, nor the tight singles. And if at the altar of a tight single, a batsman is sacrificed, so be it. The chase code is entered before he walks out to bat. There is no going back. Sometimes it will be Dhawan, sometimes it will be Rohit, sometimes it will be him, sometimes you just have to run against the damning odds. For that’s what brings about a rush of blood, from the legs to the head.

For each such magnificent chase, often adding to an equally magnificent statistic, is the thing of building, nay laboured construction, but not just day labour - often it’s what breaches into the after hours, into extra time, at night, under lights. Often you will be led to believe that he’s playing these innings between the sheets. That each Virat innings is nothing short of sex. 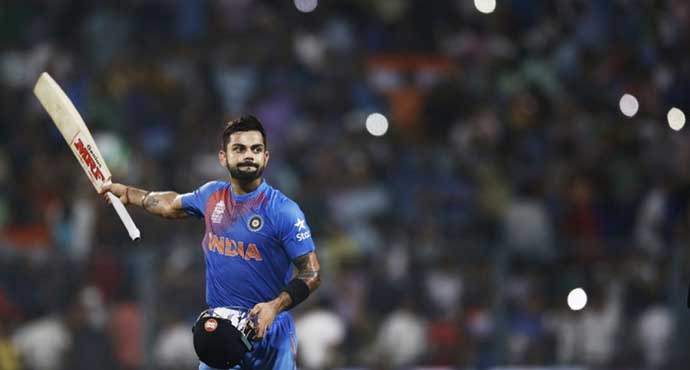 There are way too many different ways to describe a Virat inning. But what shines through each time is his commitment to stay committed - to not play that ball in the air. We’ve seen it repeatedly, it’s been spoken of repeatedly, and should be said, without wordplay or smart phrase repeatedly, Virat refuses to play the ball in the air. Neither Virat’s head nor the ball he plays is in the air. It could be on the up but rarely is it in the air.

It’s a learning for Virat, and through each innings, he teaches himself that same old boring lesson again. Ajinkya Rahane marked his return with two sixes, Virat stayed put with 10 fours but no six.

Rohit has 16 ODI centuries, Virat has 33. Rohit has three double centuries, Virat none. Chances are, Rohit, like most top order ODI batsmen, will often be dismissed attempting to play a big shot in the air. Rohit pulled Morkel for six in the third over, he perished attempting another such shot in the seventh over. With 13 needed for a win, Virat allowed himself the luxury of playing the ball in the air.

While we delight in the statistic, the 33rd century, the records that lie broken, strewn at his feet, Virat delights, roaring in the dressing room, at another Indian chase gone right. Dhoni and Pandya are at the crease, Virat appears like just another foot soldier, playing it, with a jump, in the air for a change.