Prince of the Media Blitz: Why ace cricketer Yuvraj Singh announced his retirement amidst the World Cup

Do we instantly recall his triumphant Natwest knock or all those rumoured dates with Bollywood glamouristas when we think of him? Well, that's the bane of being Yuvraj Singh in Indian cricket.

Yuvraj Singh, the charismatic, never-say-die lofty swinger of majestic sixes and the go-to man for Sourav Ganguly, the Natwest hero we fell in love with instantly, has now run himself out — of options.

Cricket has been over for a while. It is this fascination with publicity and fame that has been his undoing too. There he went again. He announced his retirement in the middle of the ongoing World Cup, the day after India’s stupendous victory over arch rivals Australia that even the bookies shortened the odds for us, which, to me, speaks of an unrealistic fascination for glory and recognition. Perhaps herein lies the tale of being blinded by the celebrity of cricket, its dazzling and insane fame and the hubris of it all.

He just needed to be in the headlines once again, didn’t he? 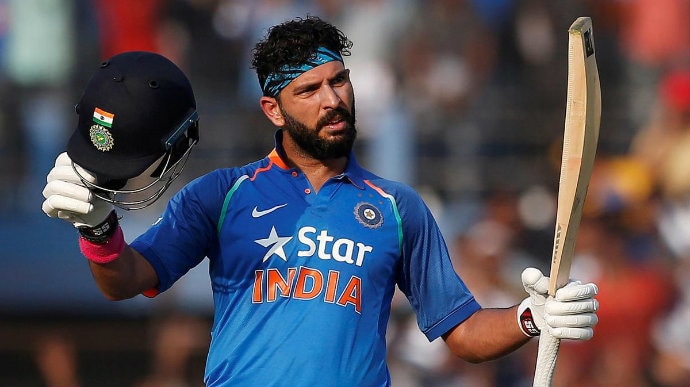 What shone brighter? Did the game dazzle or the party-boy image? (Photo: Reuters)

He wanted to be remembered again — in the middle of the greatest cricket show on earth — as the star of the show. Public memory is revised with every new milestone and with ever-younger players — even though we went through dizzy spasms when Yuvraj ruled the pitches and the outfield — we have moved on to new Gods today.

Was Yuvi reminding us or himself what a great man he used to be?

When the media presented his ‘announcement’ with all due publicity, it segued into his wins, his shots, his swagger and style, and how he was there when he lifted the Cup the last time. He was famous again during prime time, alongside the galaxy of 2019 Indian players who are currently in the news.

All this would be fine — except for the timing. It borders on narcissism. One could even say it is unsporting! Was he gnashing his teeth at his absence from the broadsheets and the screens? Did he fear that he was irrelevant?

But then, haven't we been too unkind to Yuvraj also when his swings did not match the result in copious runs? He hit a bad patch — every sportsperson does. Tendulkar, Messi, Federer — all of them suffered from a drought of posting a score, a win, a championship. We have suffered alongside their frustration, silently egging them on, to wait and be patient. Winning times will return, we reassured them and us. Tendulkar started shooting centuries again while the Fed and Messi returned to their first class play.

Why were we so unforgiving of Yuvie then? Did we turn a wry eye because he created this persona for himself, which was, frankly, bigger than the game? And when the game faltered, that persona crashed into a million shards. Hero. At times: Yes, we stood by him when he battled cancer, but not so much during his challenging dry spell. (Photo: Reuters)

Not that we didn’t weep at his cancer diagnosis, but the 2011 World Cup will be remembered more for MS Dhoni’s brilliance and how he crafted a smart, hungry team. He had proven himself with other championships already. Yuvraj was a wonderful player, brilliant and efficient but not the standalone star, despite being the Man Of The Series.

Before that win, he had us all worried, a boundary in one ball, back to the pavilion in the next.

There was this party-boy tabloid image to go with him and he diligently wore it. Anyone would immediately recall his dinners with a young and pretty Bollywood actor and the allegedly not-so-happy-end to one of his relationships with a girl he reportedly left because his mother didn’t approve. Do we immediately recall his first or last brilliant knock? He struggled in the IPL till he was unpicked. A cricketer who went for crores didn’t even have a price tag anymore.

The younger players today do seem staid and boring in comparison. But for a Bumrah or Bhuvneshwar who look like regular boys-next-door, there is a great lesson here — don’t let the arc lights dazzle you into overestimation. It was a bit like that insurance ad he did. “It is all very well, till the bat swings into sixes... otherwise (it is all over).”

Instead of searching for his lost place in the glory of fame, he should send a message out to those slogging this World Cup to do their job, win accolades, have fun (no, not the KJo-couch kind), but look at the man in the mirror and remind oneself every time — You are not bigger than the game. It giveth and it taketh it all away.