Stories of hope, courage and individual triumph of 45 national icons

India Today Editor-in-Chief Aroon Purie talks about the magazine's 45th anniversary and the 45 national icons who introspect their life-changing moments, in the January 4, 2021 edition of the India Today Magazine.

We decided to commemorate our magazine’s 45th anniversary by getting 45 national icons to introspect on their “life-changing moments”. Since I asked others to disclose the turning points in their lives, I thought it only fair that I reveal mine. I don’t believe in destiny, or that everything is preordained. Full of twists and turns, many of them unexpected, life is rarely a straight line. In fact, it is a series of accidents, happenstance and, quite often, dumb luck. At least, that’s the way it was for me. I wasn’t one of those kids who knew early in life what they wanted to be. I was hopeless in the sciences, so being an engineer or a doctor, the professions in vogue those days, was out of the question. I also came from a generation that listened to their parents, especially if you didn’t have any specific ambition. 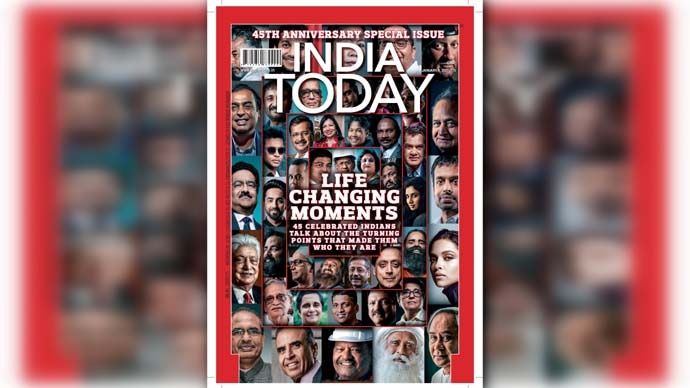 In the 1960s, my father, a self-made businessman, believed that India was going the Communist way and that becoming a chartered accountant would give me a professional qualification. Even Communism would need accountants! So, I qualified as a chartered accountant from London. Unbeknownst to me, my father and Lord Roy Thomson of Fleet, who owned the largest number of newspapers globally, had become friends after a chance meeting and decided to start a business together in India. That was the beginning of Thomson Press, a commercial printing press, as foreign ownership of newspapers was not permitted at the time. I was working in London as a chartered accountant and had come home on vacation. My father asked me to visit the press and see what I thought of it. I got involved and never returned to London. After a few years, I was put in charge, and I realised that the only way it would be sustainable would be if you had your own work. We started by publishing children’s books written and illustrated by Indians. Most children’s literature was imported at that time; I wrote some myself.

Our first magazine publication was a medical journal called the Journal of Applied Medicine in January 1975. Then followed India Today in December that year. However, although I had a passion for news, reading and asking questions, I had no grand vision of becoming a media mogul. The magazine was first designed to inform non-resident Indians about their native land. It didn’t work — the NRIs were too difficult to reach. But before closing the magazine, we decided to put it out in the domestic market. It got an encouraging response. A few months later, in January 1977, Mrs Gandhi signalled the end of the Emergency by calling a general election. That was the turning point for the magazine and me. As you can see, India Today was born out of failure. The excesses of the Emergency and the subsequent comically chaotic two-year rule of the Janata Party were ideal fodder for a young, energetic staff that went after the news and told it the way it was, without ideological baggage or vested interest. In January 1977, our circulation was 15,000 copies; by the end of that year, we touched 100,000.

There were other mini turning points. Like our prediction of Mrs Gandhi’s return in 1980 after the fall of the Janata Party government when most political pundits were pronouncing her defeat. This greatly enhanced the magazine’s credibility, and the political class started taking us more seriously. It also marked the beginning of opinion polls as a regular practice. After that, there was no looking back.

On June 2, 1997, after much debate, our fortnightly became a weekly. I had one simple mantra: that we put all our resources in producing excellent editorial content, and the business part will take care of itself. And it has. Financial strength has given us the ability to withstand pressures from all quarters that are inevitable in this business. This ethos continues to inform the India Today Group, whichever medium we choose to be in.

Our photographs and contemporary writing ensured that we stood out in the crowd, rising to where we are today—the country’s most-read magazine with a readership of 9.5 million despite the digital revolution. This is our 1,751st issue. We have never missed an edition in 45 years, not even in the extraordinary year of Covid-19. The magazine’s success laid the foundation for the India Today Group, which in these 45 years has launched 56 publications, four 24-hour news channels, a music label, seven radio stations, online shopping, online education, a school, an art gallery, 12 websites, six apps and 30 mobile video channels. There have, of course, been failures and mistakes too. Some ventures were ahead of their time, others just didn’t catch on. I never dwelt on them but learnt and moved on. I relate my life best to what the poet Gulzar says in this issue: “The edifice of our life follows no blueprint, nor does it take the shape you imagine. You just have to explore it.”

For our 45th anniversary special, we have assembled and curated a treasure trove of inspirational narratives of courage, fortitude and resilience. There are stories of public figures breaking away from their modest backgrounds. Like the rocket scientist who came from a family of marginal farmers and couldn’t afford footwear but went on to become the head of the Indian Space Research Organisation, sending probes to the sun, moon and Venus. Or the social activist from one of our most downtrodden communities, who embarked on a mission to eradicate the scourge of manual scavenging.

We also have accounts of government officials who thought out of the box to deliver astonishing results. There is, for instance, the railway engineer, who at the end of his career, developed a geography-defying project and a new mode of transport, both of which he is now closely identified with. Or the Indian woman banker who contemplated quitting her profession when she reached a crossroad only to realise that “giving up was easier and one shouldn’t take the easy option out”. Then there is the actor who was mocked in school but went on to deliver a string of sleeper hits to become one of our unlikeliest stars.

Our list of remarkable individuals also includes people who were undeterred by failure and charted a different route to success. Among them is the politician who put behind a failed bid for the post of the United Nations Secretary-General and set out on a successful career in Indian politics while also becoming an outstanding author, erudite speaker and leading public intellectual.

What also sets many of these personalities apart is the element of risk-taking, a quality many of our businessmen have in spades. Like the young entrepreneur who changed his fortunes forever when he broke away from his family’s textile business to acquire a pharmaceutical firm. Or the business baron who was thrust into running his family business after his father’s tragic death and went on to build a multi-billion global conglomerate. Another billionaire businessman had to leave his engineering studies at Stanford to take over his father’s cooking oil business and now runs one of India’s largest software companies. A fourth magnate, who presides over a multi-billion-dollar empire spanning metals, mining, oil and gas, started out dealing in metal scrap.

Other icons have veered from the beaten path to craft extraordinary success stories. The man who is one of our most gifted lyricists today started out in a motor garage. A banker who took to writing only to escape the monotony of his job has now morphed into a bestselling author.

In many of these stories, you will find a pattern and some life-altering lessons. Adversity, most often, is a great educator. It teaches you to fight your way out of hostile circumstances and brings out your best. There is no substitute for hard work; talent by itself is not sufficient sometimes. Never rest on your educational qualifications, just keep learning. Being at the right place at the right time is a matter of luck. However, the choices we make define who we are and what we become.

As we complete one of humanity’s worst years on record, I sincerely wish these stories of hope, extraordinary courage and individual triumph provide you inspiration in the new year. I’d also like to thank you, dear readers, for being part of our 45-year journey. Here’s to many more ahead.

#National icons, #45th anniversary, #India today magazine, #Anniversaryspecial
The views and opinions expressed in this article are those of the authors and do not necessarily reflect the official policy or position of DailyO.in or the India Today Group. The writers are solely responsible for any claims arising out of the contents of this article.