48 MPs, MLAs accused of crimes against women and PM Modi still wants us to believe rape is not political

The BJP has the highest number of politicians, at 12, accused of gender violence.

At least 48 MPs and MLAs in the country have cases related to crime against women registered against them, a new report has found. The highest number of such politicians –12 – is from the BJP, the party ruling at the Centre and most of the states.

The report, by Association for Democratic Reforms (ADR) along with National Election Watch, has been compiled after analysing election affidavits of 4,845 current MPs and MLAs, out of the total 4,896. At a time when the nation is reeling under a spate of rapes and the political class’s reaction, or rather the lack of it, to them, the report states in clear figures what we well know – rape in India does not really invoke the horror it should, and there are a thousand ready excuses to justify and condone it.

Who will save the 'daughters'?

When people accused of such crimes are given tickets to contest as people’s representatives, and then win elections too, how much intent can we expect the administration to show in cracking down on crimes against women, attractive slogans notwithstanding?

Recently, after a journalist protested against Tamil Nadu governor Banwarilal Purohit for “patting her paternally” on the cheek, a state BJP state leader, S Ve Shekher, posted on social media: “Governor should wash his hands with phenol for touching her [the woman journalist]. Illiterate scoundrels are now in media. None can become reporter or news anchor without sleeping with some big shots.”

Uttar Pradesh MLA MLA Kuldeep Singh Sengar was arrested almost a week after a teenager he is accused of raping tried to immolate herself, and her father, allegedly beaten up by Sengar’s goons, died in police custody.

Comments from our political class about how rapes are caused by women wearing jeans, using mobile phones and not marrying early enough, because boys will be boys, are common enough.

These are the very people we expect to raise issues regarding women’s safety, and formulate policies to tackle the problem.

For every politician with a criminal record who gets elected, there are many more whom parties think fit to filed. This is not limited to the “beti bachao, beti padhao” BJP alone, but is spread across the political spectrum.

How does one explain this? Tickets to stand for elections are given after much consideration and calculation, selection and elimination. Accusation of rape, however, seems not reason enough for rejection. 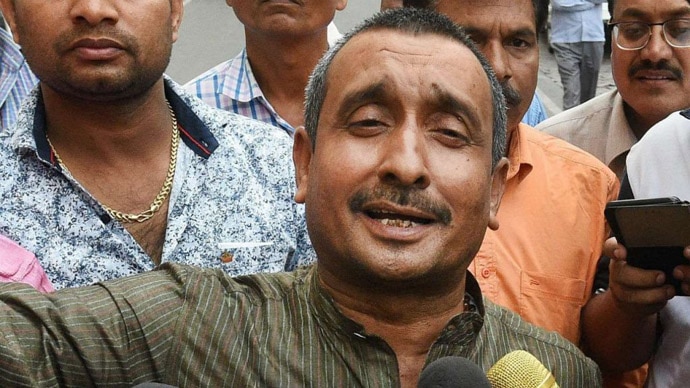 Uttar Pradesh MLA MLA Kuldeep Singh Sengar was arrested almost a week after a teenager he is accused of raping tried to immolate herself.

Also, the political class alone is not to blame. It is, after all, we the voters who elect these people to Parliament and state Assemblies.

Criminality in Indian politics is not uncommon. In a scenario where fear and money are widely used tools to get votes, candidates with a criminal past have clear advantages – they have influence in the area, they have money to fill the party’s coffers, to campaign, and if need be, to buy votes.

In fact, a research last year found that “over the past three general elections, a candidate with a rap sheet of serious charges has had an 18 per cent chance of winning his or her race, compared with 6 per cent for a “clean” rival.”

However, the patronage does not end with giving tickets. As many as 31 per cent ministers in the Modi government have had criminal cases against them.

With the state of politics so morally flexible, perhaps it is too much to expect parties to draw the line at those accused of sexual crimes.

It is true that the government or the political class cannot alone make India safe for women. However, they are supposed to lead the charge – they have the power to not just formulate laws and policy, but also influence public opinion.

If this class is full of crime-accused, not only do women have no one to take up cudgels for them, the men get terrible role models to look up to.

In a society as patriarchal and regressive as India, institutional action has a great role to play in spelling out the concept of a woman’s bodily autonomy, that she is not the property of a man or a community, and that transgressions will not be tolerated.

In the present scenario, then, achhe din for women don’t seem likely any time soon.