What is the Aarey vs Mumbai Metro war?

In a blow to the green crusaders, the Supreme Court said on October 21, 2019, that it is not stopping the Metro shed project in Mumbai's Aarey Colony. It also said that there is no stay on the Metro project and that the stay order is only limited to the felling of trees in Aarey Colony.

With all headlines and focus on Aarey, here is what you must know about the forest, the controversy and the need to conserve it.

Aarey Milk Colony is a 16 sq km green zone that extends from Powai to the Western Express Highway, Goregaon in Mumbai. It includes patches of forests, grasslands and marshes. These harbour 77 species of birds, 34 species of wildflowers, 86 species of butterflies, 13 species of amphibians, 46 species of reptiles, 16 species of mammals and 90 different types of spiders. Several newly discovered species of scorpions and spiders have also been found here, some named after the forest - Heterophrictus aareyeneis (tarantula) and Lychas aareyensis (scorpion). It used to be a part of the Sanjay Gandhi National Park before being opened for commercial purposes and was again declared as a reserve forest.

27 tribal communities also reside in the colony, making it home to over 3,500 families of Warli Adivasis and other tribal groups that face displacement now. Trees at the construction site of the Metro train parking shed in Aarey Colony. (Photo: Reuters)

What is the controversy?

A part of the forested land has been approved for Mumbai Metro Rail Corporation Limited (MMRCL), to build a car shed worth Rs 900 crore, which will cater to the upcoming Colaba-Bandra-SEEPZ Metro Line. Prime Minister Narendra Modi laid the foundation stone of the project on September 7 this year. The MMRCL has earmarked 33 hectares (around 2%) of the Aarey Colony land for this car shed. The land comprises over 27,000 trees — all waiting for the axe to fall.

Activists argue that this will pave way for the forest land to be completely destroyed over time. 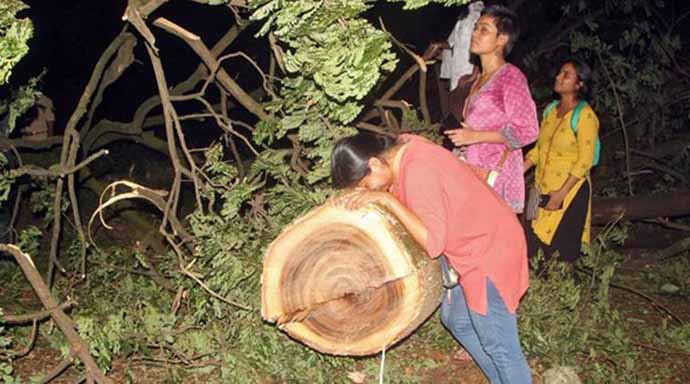 A woman breaks down as she touches a tree after it was cut down for the upcoming car shed in the Aarey Colony. (Photo: Reuters)

The issue was raked up in the election campaigns before Maharashtra went to polls on Monday. The state government and BJP supporters have been vocal in expressing their support for the car shed project, and say that the benefits of Mumbai having a Metro will far outweigh the number of trees cut.

However, not everyone is convinced. On the opposing camp are the Congress, Sharad Pawar’s Nationalist Congress Party, and surprisingly, BJP’s ally Shiv Sena.

Detaining citizens and arresting youth for standing with environment. So much for speaking about environment at global level while we destroy ecosystems here in the middle of the night. https://t.co/BI10eHsUIz

The beginning of the protests

On the night of October 4, 2019, barely hours after the Bombay High Court dismissed pleas opposing the decision to cut 2,646 trees for the Metro project, Mumbai civic authorities started cutting trees on a large scale at Aarey Colony. Clashes were reported between the Mumbai Police and protesters who tried to stop the felling of trees for the construction of Mumbai metro in Aarey Colony. (Photo: Reuters)

When the courts intervened

The Bombay High Court had directed the petitioners to approach the apex court and the National Green Tribunal for respite. Residents came out in large numbers and started to protest at the site. This led to a clash between the protesters and the guarding policemen, and many protesters were arrested. This resulted in the issue coming to limelight across the nation, with many protesting the government’s decision to wield the axe.

When the activists approached the apex court, it observed that it “appeared Aarey was a forest at some point of time,” and the Supreme Court asked for a status report on the number of trees felled so far and the afforestation by the authorities. On October 7, the court ordered the Maharashtra government to not cut any more trees in the Aarey area. 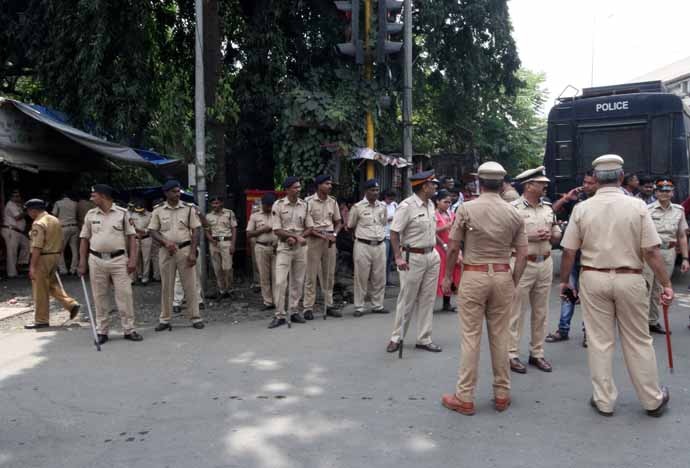 Police stand guard outside the Aarey Colony after demonstrators held a protest demanding that the Mumbai Metro Rail Corp Ltd (MMRCL) not cut trees to build a train parking shed for the upcoming line on October 5. (Photo: Reuters)

Where is the hope?

The lack of clarity on the status of Aarey has proved to be its undoing. Since the green patch is an “unclassed” forest, the state government claims that the land can be used for commercial and developmental projects like the Metro. However, Aarey falls under the Sanjay Gandhi National Park (SGNP). While the law permits trees can be felled in an unclassed forest, Aarey is ‘inside’ the Sanjay Gandhi National Park (where trees cannot be felled under the Wildlife Protection Act).

Aarey is considered to be the green lungs of the heavily polluted Mumbai. The city has already lost most of its green cover.

While the latest ruling of the apex court to not stall the car shed project has come as a setback to Aarey’s protectors, all hope is not lost. The matter will again be heard in court on November 15, 2019. One still hopes that better sense will prevail and the car shed be shifted elsewhere and Aarey is spared.