Innocence to infidelity: What is Ahalya's truth?

An exclusive excerpt from Koral Dasgupta’s upcoming book, Ahalya, that explores the life of Gautam’s wife — from innocence to infidelity.

It is known that Ahalya was cursed by her husband, Gautam, for indulging in a physical relationship with Indra. But is there another story to Ahalya's truth? Who was Indra anyway? A king? A lover? A philanderer? The first book of the Sati series by author Koral Dasgupta, Ahalya, hinges on these core questions, narrating the course of her life, from innocence to infidelity.

In the Sati series, Koral Dasgupta explores the lives of the Pancha Kanyas from Indian mythology, all of whom had partners other than their husbands and yet are revered as the most enlightened women, whose purity of mind precedes over the purity of body. The five books of the Sati series reinvent these women and their men, in the modern context with a feminist consciousness.

We present an exclusive excerpt from the book. 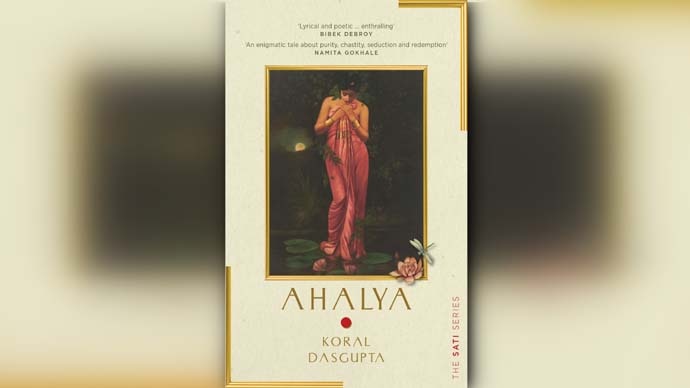 His honest confession though attracted nothing but mockery. People considered his obsession to be the mania of a creative mind. The royal women of Mithila were jealous and angry. The most exquisite piece of garment, which took several years to be woven in its majestic design, was meant for someone who was to be born thousands of years later! Could there be something more silly? Disgruntled and disappointed, the intricate sari crafted for Princess Maithili with supreme care and panache was returned.

The heartbroken merchant did not take kindly the royal family’s refusal to accept his masterpiece for the future heir. He treated the return as a rejection, an insult to his craft! The merchant was unable to bear the fate of his revered handiwork. Instead of taking it back to his inventories, he chose to place it at the feet of the almighty, to finally relieve himself of the agony, for which he travelled the distance to attend Gautam’s fire sacrifice. He stood aloof all through the festivities, engaging but not necessarily immersing in the rituals. He managed to sacrifice the ambitious fabric but not the humiliation it had brought him. His body was captive in the present, while his mind had travelled to the future and his eyes had viewed what the rest of the world couldn’t possibly fathom.

The gossip made for a good audience. But when the sari was passed on to me I was so caught up in its gorgeous spread and stunning colours that I failed to read into the curse of an artist and, perhaps, even the sigh of the yet-to-be-born queen. The naughty winds passed again, prophesying that many years later this merchant would be reborn as Lakshmana, the trusted younger brother of the prince of Ayodhya and Sita’s husband, Rama. Lakshmana would go on to become a loyal governing force for the divine couple. He would accompany like a shadow, the great Rama, the King of Kings, when he would come to oblige my life with a vital influence, in the distant future.

I ignored the obnoxious forecast. Neither did it insist that I pay any attention to its gibberish. Laughing in silence it twirled away.

Late in the night when everyone had left and Gautam was fast asleep after a bone-wrecking day, or so I thought, I stealthily got up and draped the sari around, arranging the folds and stretches perfectly. The huge moon shone bright outside, drowning the forest, our hut and the rugged path in front. The mystique was calling to step out of my terrestrial bindings and merge with the heavenly aesthetic. I walked out to bathe in glory. Some holy, hypnotic music was playing through my veins as I walked fearlessly towards the forest. Chunks of clouds flew all across the sky, clutching to and separating from each other swiftly, as if patience would cause stagnancy! I was lost in the race above when stealthy footsteps from behind frightened me out of my fantasies. I turned. Gautam was standing behind, unhesitant and relaxed. He looked ethereal. His body radiated masculine charm, his muscles shone in splendour, his eyes glowed with celestial desire.

He had woken up to the sultry Nature, allured by the sensuous provocations of this hour. Hands outstretched, he invited me to join in the exhilaration, as if beyond this there was nothing.

I stared in awe. This wasn’t the Gautam I had known!

Also Read | The story of Ahalya and Indra: Was it really adultery?

#Book excerpt, #The sati series, #Ahalya
The views and opinions expressed in this article are those of the authors and do not necessarily reflect the official policy or position of DailyO.in or the India Today Group. The writers are solely responsible for any claims arising out of the contents of this article.

The writer is an author, academic, columnist, painter and professional speaker.