We are all dissenters now: Anand Teltumbde's arrest shows all social voices being suppressed

The term ‘urban Maoist’ is a phrase crafted by important political leaders in power to include within its ambiguity even the views of those living completely transparent democratic lives. 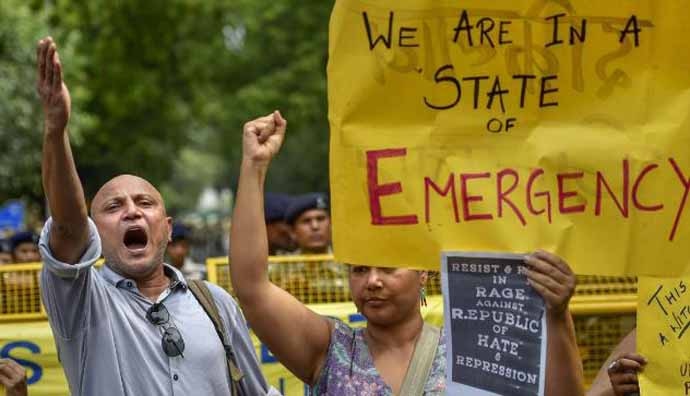 Protests were staged across the country following the arrest of five Left-wing activists by the Maharashtra police in August, 2018. (Photo: PTI)

It can be used to condemn and label those whom the incumbent powers perceive as a political threat as anti-national, falsely accusing them to be believers in a violent revolution and therefore seditious.

Authorities no less than Prime Minister Narendra Modi, President of the ruling party, Amit Shah, and senior BJP leader Arun Jaitley have used the term ‘urban Naxal’ to label and condemn people who often speak up for the most marginalised.

Such usage thereby silences the cause. The police have the confidence and impunity then to arrest the 'labelled' activists under draconian laws that keep them in jail. They are denied bail for years, and also the opportunity to prove their innocence. This treatment is in reality a warning to all those who dare to raise a dissenting voice..

In the recent spate of arrests under the BJP's watch, people accused of being 'Maoist' and labelled 'seditious' are mostly scholars and individuals with independent minds. For the average citizen, the words Maoist and Naxal are labels of condemnation, allowing the mind to range a whole spectrum of destructive beings. These are acts of calculated intent, to raise fear and terror, to cloud the normal citizen's response to prevent injustice or miscarriage of justice by authority. In one fell swoop, both critic and criticism are silenced. Popular response afraid of its own predicament stays quiet, and instead of larger democratic protests, there is a thundering silence.

The latest is the arrest of Anand Teltumbde, professor of the Goa Institute of Management, a serious scholar of repute and teaching, a management professional, columnist, civil rights activist and author on various issues of contemporary people's movements.

We as citizens have to seriously address the issue of the arrests made under the Unlawful Activities (Prevention) Act (UAPA) that investigates people for promoting disaffection against the state and invoking terror. The use of the words 'sedition' and 'terror are designed to silence our protests. The arrested get isolated and are condemned to incarceration, despite the frequently completely non-credible evidence to support the charges against them.

It is therefore critical that we should question the basis on which these acts and laws are invoked.

These laws are made in our name by people who are supposed to represent our democratic collective self-interest.

We now need to begin with an examination of the laws itself. Successive governments have steadily introduced through anti-terror laws, a definition of illegal thoughts or 'thought crimes'. The Unlawful Activities (Prevention) Act (UAPA) enforces extraordinary criminal liability on any person committing an 'unlawful activity' which in turn has been defined as an activity 'which disclaims, questions, disrupts' or 'causes disaffection' against India. Likewise, Section 124A, IPC defines the offence of sedition as any 'attempt to excite disaffection towards the government'. Left intellectuals have slammed the arrest of social activists. How many more of them face such threats? (Source: India Today)

The broad and subjective vocabulary used in the UAPA and Section 124A is designed to silence our protests. The provisions are so vaguely defined that any democratic dissent can be labelled seditious. For instance, it is an ‘unlawful activity’ to ‘question’ or spread ‘disaffection’ against India, with no guidance defining content.

These provisions are deliberately kept overbroad and subjective.

Can criticism of corruption, non-delivery of services and justice to the poor and the deprived be classified as 'sedition'?

Can amplifying the voices of people unable to survive or endure poverty be defined as 'sedition'?

Can the subscription to a political ideology, merely thinking so, be seditious?

The arrested get isolated and are submitted to incarceration, despite the completely non-credible evidence to support the charges against them. It is therefore critical that we should question the basis of these acts and the laws. These laws are made in our name, by people who are supposed to represent our democratic collective self-interest.

The UAPA, the Chhattisgarh Special Public Security Act, and the provision on sedition allow the government to target certain individuals, silence their voices, and their causes.

We would do well to ponder over why youth leaders such as Hardik Patel and Kanhaiya Kumar are targeted under sedition? What are the consequences of this for our democracy? The targeting of Kanhaiya Kumar under sedition is questionable. It has also made him a national figure. (Source: PTI)

A quick run through the list of such people demonstrates that the attempt has been to target individuals who may be dissenters or leaders able to mobilize the masses.

Repeated arrests insidiously establish a political narrative. The careful construct of language — urban Naxal for instance — is yet another target accompanied by fear and insecurity. These are activists, scholars, and thinkers who may otherwise not present a significant threat to the government’s interests, but their arrest will help brand a certain thought process as anti-national. There is a deliberate plan to create false demons, and then make political capital by making these people political punching bags.

Why would all these people who have published their thoughts (in their own name) and written and spoken out in the public domain, be plotting against the state?

Kanhaiya, as a national figure, has been created because of the persecution of the ruling establishment. He has been charged with sedition after more than two years of investigating a college protest and allegedly objectionable sloganeering by others. All the 10 arrests, including those of people over 70 years old, were well-established, open ideologues and thinkers who espoused the cause of justice for the marginalised and oppressed.

Perhaps, this government was actually worried about the peaceful, democratic and powerful struggle for justice by the marginalised and oppressed groups. The 10 persons arrested recently consistently spoke for those who were arrested, harassed, and attacked allegedly through state-sponsored repression. There was nothing in their public lives to show how they were a threat to the Indian Constitution or its values. After they were charged, they did not attempt to hide or go underground, indeed, like proper Maoists would.

Anand Teltumbde was arrested at 3am from the airport as if he was a fugitive about to escape. He has been a critical thinker striving to create an India based on justice, equality and democracy. He is an activist, an intellectual, writer, thinker, who speaks not just for Dalits, but all oppressed communities. The only crime Anand Teltumbde has committed is to have spoken for the marginalised. (Source: Twitter)

There are many of us who would say — if Anand Teltumbde is anti-national or a dangerous Maoist, then in the eyes of the government, so are we.

In fact, that seems to be the message the government wants to pass: “If it’s Anand Teltumbde today, it could be you tomorrow.”

It is time the government explained itself logically and ethically.

It is time too for citizens to understand that fear is not an operative mechanism for the totalitarian state alone. It can be used by any government which works opaquely without transparency and accountability. Today, people who are raising their voices to protect democratic space and the Constitution are being targeted. But every Indian must understand that in these acts of the government, it is democracy and the Indian Constitution that are eroded.

Also read: What 'Urban Naxals'? You are either a rural revolutionary or an urban activist