How to identify an anti-national

There is a heightened sensitivity to everything we say. Only politicians are exempted.

News stories are often educative, but until quite recently stories that offered precise instructions about 'do's' and don'ts' were rare.

That is changing. I have just learnt from a newspaper that it is not a good idea to talk freely on the mobile phone while you are in a taxi. You never know how your driver is sizing you up. If your conversation indicates to him that you are a dissident, he might take you to a police station. This is what happened to a young poet in Mumbai who had gone there to attend a literary festival.

It was different in the February of 1976. Those were Emergency days. Before you settled down in the Indian Coffee House with a friend, you made sure there was no suspicious-looking face at the next table. In a taxi you could relax, no matter what you were discussing. The driver was from your neighbourhood and he knew that you were a good citizen. That is where the big change is. You call for a taxi, using your smartphone. The driver is a stranger each time. Our young poet got into trouble because he ignored the driver, trusting him to be uninterested in the passenger's political views. And it transpires that the driver has been publicly honoured by the Opposition in Maharashtra. He has been given the 'alert citizen' award for taking the talkative poet to a police station. 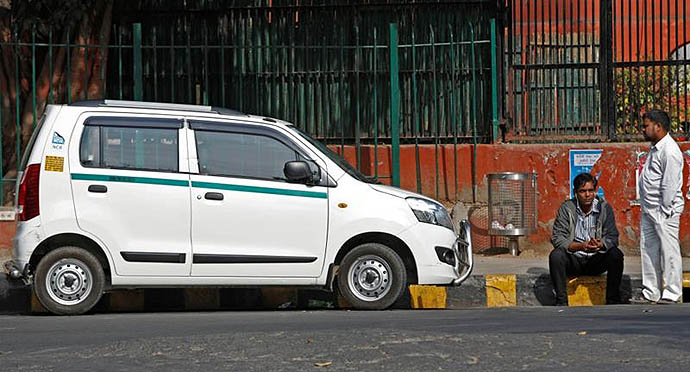 In a taxi you could relax, no matter what you were discussing. Or so you thought. (Photo: Reuters)

I suppose we all must recognise the new ethos we are in. There is a heightened sensitivity to everything we say. Only politicians are exempted. They can say anything they like and whenever they feel like it. For the rest of us, it is important to maintain self-vigil. For older people, this may not mean that much of a personal challenge, but what about the young? They do say strange things at times. Some of these things are quite objectionable. In earlier times, the older people saw this as part of life. Now, they must tell the young to watch out. In colleges and universities, young men could get away with shocking statements, even slogans. That is no longer possible.

Academic administrators have quietly embraced the neo-nationalism of their political masters. This ideology has thin skin. It perceives every verbal transgression as a threat. Readiness to getting hurt and patriotically disturbed is now an essential quality of being a fully aware and responsible citizen. The plea that the verbal transgressor was young and inexperienced gains no traction.

In addition to his free talk on the mobile, the young poet's case was carrying a tambourine. The alert driver didn't like that. This was probably his first chance of carrying a passenger with a tambourine. Normalcy requires that you should look like decent people, like civil servants or political leaders. Deviation from models of power is not a good idea. One can conclude that the time when the young felt encouraged to be different and even appreciated is fully over. But the tambourine has a special problem which lies in its association with traditional monkey-men.

They used to carry a small drum, not very different from a tambourine. The little monkey accompanying them danced to the tune of the drum. That sight has now become rare, but folk stories depicting it have found their place in some textbooks.

I feel our poet would have done better if he were carrying a guitar. As a musical instrument, the guitar became a symbol of youth culture in the 1960s. Once that culture became acceptable, the guitar became representative of the establishment. Today, the tambourine signifies rebellion. That is why the front cover of former JNU student's union president Kanhaiya Kumar's autobiography shows him with a tambourine.

There is one part in my interpretation of the news about the Mumbai taxi that does not quite fit. The taxi driver was also young, so why wasn't he impressed by his passenger's tambourine? Instead, he saw it as a sign of something seriously wrong with the passenger. Perhaps, he had never previously had a young poet as a passenger in the back seat.

Frequent encounter with youthful eccentricity is essential for tolerance. It is also likely that he had never been exposed to the idea that all poetry, irrespective of its quality, is an expression of eccentricity. It is the job of poets to help us tolerate the bizarre and the awkward. Only a teacher could have explained to our taxi driver this relationship between oddness and poetry.

It is highly unlikely that the driver had been taught by a teacher who might say in a class that completely normal-looking young men don't write poetry.