Actor Priyanka Chopra representing the “awesomeness” of Assam clad in a yellow frock and jaapi has stirred up a storm in the state Assembly. The problem stems from the fact that the photo bears a hint of Chopra’s cleavage. This does not go with Assamese culture, outraging Congress members have claimed in the Assembly, raising a demand to remove the photo and also do away with her as the brand ambassador of the state's tourism industry. For Priyanka Chopra, this is neither her first encounter with dress-shaming nor with issues regarding Assam. Her choice of a short dress at a meeting with Prime Minister Narendra Modi drew a lot of flak on social media; she was also criticised for not sparing a word on Assam floods last year despite representing the state. 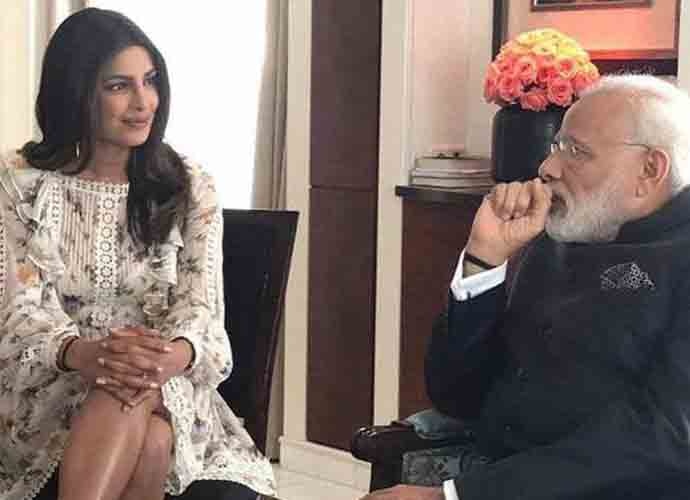 The hat (jaapi) that she is wearing in the photo is an essential part of Assamese culture. A jaapi is a conical hat made of bamboo and jaap (bundle of taku leaves). Instead of an Assamese outfit, like mekhela, she has teamed the jaapi with a yellow frock, which is hinting at her cleavage. The photo is part of a calendar brought out by the Assam Tourism Department Corporation (ATDC). When the calendars were being distributed among the MLAs in the House, Congress MLAs refused to accept it.

According to reports, Rupjyoti Kurmi slammed the government for tinkering with tradional Assamese outfit and lending it a western flavour. “The government should preserve the respect of the Assamese society. Frock is not an Assamese attire and the calendar pictures were not sober at all. Instead, they could have used the traditional mekhela sador,” he said. MLA Nandita Das, too, supported the demand.

I don't support him.. A tourist to Assam can be dressed like Priyanka & still try a japi.. Will he protest that. Assam is known for broadmindedness and Mr. Kurmi seems to contradict that concept.. Why is he wearing Shirt, an English dress ? Why not wearing Chula, cheleng ?? https://t.co/0L7YKcP8i7

ATDC, on the other hand, stood by its decision and found nothing wrong in the Quantico actor wearing a frock with a jaapi. The idea behind the calendar is to reach international tourists who might well identify with a frock. “Priyanka Chopra is an international figure and her presentation has not diminished Assam’s culture in any way,” chairman of ATDC, Jayanta Malla Baruah, said.

The debate has also taken a different direction about why Chopra was chosen as the brand ambassador in the first place as there were many Assamese actors who could have been given the role. ATDC chairman’s comment whether the photo of Priyanka Gandhi should have been used instead of Priyanka Chopra is also uncalled for. It may be noted that Chopra was named the brand ambassador of Assam in 2016 under a two-year "free of cost" contract, after the BJP formed a government in the state. Himanta Sarna Biswa, the Congress leader who defected to the BJP before the 2016 election, is the current tourism minister of the state.

Mr. Kurmi, you would have made sense had you raised questions on the infrastructure condition of the Prashanti lodges and other govt. guest houses, or on the bad services that guests pay for. Beg your pardon but targeting PC’s attire was real cheap. https://t.co/jXzz1RhFkY

Well I actually support this cause of removing Priyanka Chopra from Assam Tourism Ambassador but my reason deflects from Congress as to me it seems that she doesn't suits on it in any angle as she hardly bears any knowledge about Assam's region, history & people. https://t.co/2v8Xeb1AyI

I applause the views of @jayanta_malla in today's debate with @atanubhuyan on @priyankachopra. Jaapi respresents Assamese culture and there is no shame in wearing that with a half sleeve top. Thers is no hard and fast rule dat u have to wear mekhela sador to represent Assam! Why the controversy is lame

Famous faces from entertainment and sports industries are chosen as state tourism ambassadors since the aim is to boost tourism, to reach national and international tourists. Shah Rukh Khan being the face of West Bengal tourism, Steffi Graf having represented Kerala tourism, choice of Chopra as Assam's face is hardly a short shrift to Assamese actors. And as far as Assamese culture is concerned, the official video of Assam tourism features Chopra in a mekhala performing Bihu dance, both glorifying traditions of the state, the cleavage-revealing frock can hardly bring the state down.

Also read: Why United States takes its guns to school

#Brand ambassador, #Tourism, #Priyanka Chopra, #Assamese tradition
The views and opinions expressed in this article are those of the authors and do not necessarily reflect the official policy or position of DailyO.in or the India Today Group. The writers are solely responsible for any claims arising out of the contents of this article.