Why controversy over Avni's killing is only getting murkier

After the initial firework over the killing of tigress T1 – popularly known as Avni – on November 2, stories of conspiracy and political hatred have started to come out. Sources have told Mail Today that the disgruntled Union Minister for Women and Child Development, Maneka Gandhi, had called Shiv Sena chief Uddhav Thackeray and his cousin Maharashtra Navnirman Sena (MNS) president Raj Thackeray urging them to fan the controversy over the tigress’ killing.

Interestingly, only after their conversation, the Thackerays came into action as Uddhav echoed Gandhi in demanding the resignation of Forest Minister Sudhir Mungantiwar Raj.

Mungantiwar told Mail Today that he had talked to Uddhav after the latter raised doubts over Avni’s killing. “I don’t know what transpired between them but I told Uddhavji that he had lost a good friend after he targeted me for no fault of mine,” Mungantiwar said.

He added that he always held Uddhav in high regard but the Shiv Sena chief's stand on this issue has left him heartbroken. “I always advocated for an alliance with Shiv Sena because of the respect for Uddhavji. I had talked to him two days before his Dussehra rally expressing my wish for an alliance. I don’t think I will take any initiative for the alliance anymore after his unwarranted firing salvo at me.” 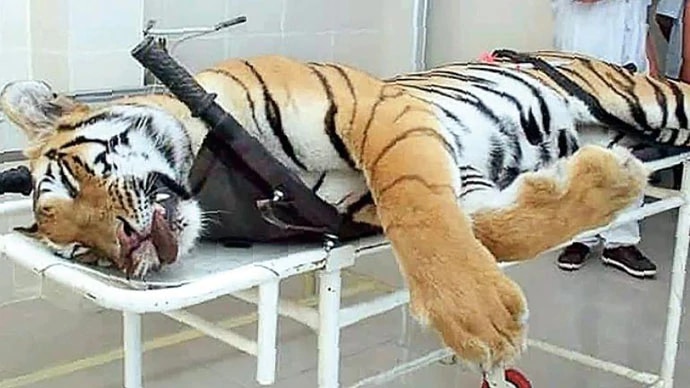 In another letter to Fadnavis, Gandhi has expressed fear that both the cubs of Avni might have been killed like their mother. Mungantiwar discarded the speculation. “They are semi-adult cubs and take care of their food on their own. We have launched an operation to trace them.” The cubs’ pugmarks were noticed in the area of Yavatmal, where Avni was gunned down.

Mungantiwar dismissed the allegation that Avni was hungry when she was killed as mentioned in her autopsy report. “The report said she had not eaten for four to five days. Normally, a tiger does not eat for 10 to 11 days once he eats his prey. It is ridiculous to say that the tigress was hungry.” He ruled out a possibility of seizing the gun owned by shooter Asgar Ali Khan used in Avni's killing. “A weapon is used when there is a crime. In this case, the shooter was authorised to kill the man-eater so the question of seizing the gun does not arise.”

Mungantiwar has arranged for a special screening of a documentary his department has prepared on its work towards planting 50 crore trees in the state for representatives of 64 countries in Mumbai on November 24. He said that he will continue to focus on his good work though he will remain aloof from political negotiations for some time. “Our situation is like the game of snake and ladder. We had reached to 97 very easily but met the snake at 98 and came down to two,” he summarised the controversy.