The Hindu-Muslim discord was prevented, thanks to the steps taken by the administration and community leaders. But Muslims in India are now divided.

As the date for verdict over the Ayodhya land title suit drew closer, the air was thick with apprehension. Along with beefing up security arrangements across north India, there were appeals to maintain calm from numerous quarters. Meetings between Hindu and Muslim community leaders were organised at various levels to promote goodwill. Nearly two weeks into the verdict, it seems that the efforts have been successful.

Any Hindu-Muslim discord was prevented. Unexpectedly however, there is an increasing rift among the Muslims. No sooner than the Supreme Court pronounced its verdict, than there was near unanimity among Muslim leaders that the verdict was unjust. The differences arose when it came to deciding the reaction to the verdict. The Muslim community is divided down the middle on how to react to the Supreme Court verdict. (Source: Reuters)

A majority of the community leaders, especially those who were involved in the legal fight, accepted the verdict despite reservations. In a press conference called within an hour after the SC order on November 9, Zafaryab Jilani, secretary of the All India Muslim Personal Law Board (AIMPLB), maintaining he is dissatisfied with the verdict, appealed, "Since this is the Supreme Court's verdict, we respect it. I appeal to all citizens to maintain peace and tranquility. There should be no sort of protest from any side."

President of Jamaat-e-Islami Hind (JIH) Sadatullah Husaini also expressed similar sentiments. Speaking at JIH headquarters in Delhi hours after the verdict, he said, "No society can live peacefully without rule of law... and therefore [to maintain rule of law], we will respect the Supreme Court's verdict."

Zafar Ahmad Farooqui, chairman of the Sunni Central Waqf Board, one of the key litigants in the case, said, "We welcome the Supreme Court verdict in the case."

A fringe group of Muslims, however, vehemently opposed the community leaders. Hours after the verdict was delivered, Wajihuddin Ali Khan, president of an Islamist student organisation, Students of Aligarh Muslim University (SAMU), wrote on his Facebook wall, "Is accepting a decision of a taghoot (non-Godly institution) not a sign of worshiping it?"

In an apparent reference to those Muslim community leaders who accepted the Supreme Court's verdict despite being dissatisfied with it, he ended his post with "#Unsatisfied Gang". The administration and community leaders have been largely successful in ensuring calm after the verdict. (Photo: Reuters)

Two days before the verdict was delivered, a Delhi-based Islamist organisation, Islamic Youth Federation (IYF), issued a press release saying, "Those Muslim leaders and intellectuals, who until yesterday were saying that we cannot compromise with Babri Masjid, a majority of them are now saying that whatever the decision comes, we will accept it in 'whatever manner' it will be."

The message was clear: "We will accept the verdict, but only if it is in our favour."

It was also an open attack on the Muslim community leaders who were appealing for calm.

This difference of opinion over how to take verdict laid the foundation of the rift. An interfaith meeting called by National Security Advisor (NSA) Ajit Doval at his residence on November 10, a day after the judgment, proved to be the trigger. The meeting was reportedly attended by 18 Hindu and 12 Muslim leaders.

The Muslim leaders included Muhammad Salim Engineer, vice-president of Jamaat-e-Islami Hind, Navaid Hamid, president of All India Muslim Majlis-e- Mushawarat, Ahmed Khan Dariyabadi of All India Ulema Council among others. The meeting focussed on discussing importance of maintaining peace and harmony in the society. Speaking at the meeting, Engineer said, "Remaining together and moving ahead with justice, harmony, equality and freedom will be victory for India."

Attacking the Muslim leaders who attended the interfaith meeting, Moradabadi wrote in an article on Urdu Media Monitor, "Muslim community's biggest problems are its leaders who are devoid of vision and wisdom both; yet they think to interfere in each and every issue is their divine right." 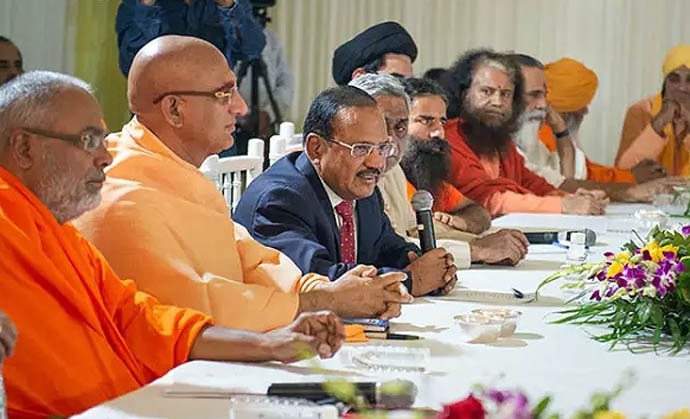 He added, "At a time when the community is in deep shock and despair, they are busy in dinning and enjoying with their masters and have been issuing senseless statements."

In a similar display of antipathy towards Muslim leadership, Mubashir Khan, media in-charge of IYF, posting pictures of the meeting on his Facebook wall, mocked the Muslim community leaders who attended the meeting with the caption, "We are unhappy with the verdict. And this is a good and novel way of expressing our unhappiness."

Interestingly, even AIMPLB chose not to be a part of the meeting.

Declining the invitation, general secretary of AIMPLB Wali Rehmani wrote in a letter, "At a time, when the government is pushing for amendments to the citizenship act that is discriminatory towards Muslims, I do not think I should participate in the meeting."

The difference between AIMPLB and the likes of IYF and SAMU is however marked. While the former declined invitation from a government which it believed wasn't upholding the principles of secularism, the latter seemed to reject the legitimacy of judiciary itself by calling it as a 'non-Godly' institution.

Reacting to the criticism, JIH in a press release on November 11 said, "The participation of Jamaat-e-Islami at the meeting has led to certain questions being raised regarding our position in the matter... It must be clear that the representatives of JIH attended the meeting only to convey our disagreement and dissatisfaction with the judgment and the course of events."

It may seem that JIH has bent under criticism and accepted that it committed a mistake. But on the ground, things are different.

Ashhad Jamal Nadvi, president of a JIH branch in Uttar Pradesh's Aligarh, in the Friday sermon delivered from an Aligrah mosque on November 15, said that people who had made zero contribution in the struggle for Babri Masjid are criticising the leaders who had made great sacrifices in this battle.

Referring to the fact that the Supreme Court judgment has accepted that there is no evidence to show the Babri Masjid was built after demolishing a temple, he added, "Given the positive points in the Supreme Court's judgment, the trust of Muslims in their leadership should increase, not decrease."

Or if they propose to be leaders themselves, do they have the maturity displayed by the Muslim leadership in the Ayodhya case?

For the moment, all they offer is chaos.

Also read: Supreme Court verdict on Ayodha tells the nation it's time to move on