Why Pune police have arrested activists over Bhima Koregaon violence

The raids were conducted in Mumbai, Hyderabad, Goa, Delhi and Ranchi.

Pune police investigating the case related to the Elgaar Parishad rally, organised a day ahead of the bicentennial celebration of the battle of Bhima Koregaon, conducted raids at multiple locations across the country and arrested some prominent activists, who it alleged are Maoist sympathisers.

The police claim speeches made at the rally were one of the triggers for the violence that was witnessed in and around Pune the next day.

Sudha Bhardwaj, a human rights lawyer, at Faridabad Court in Haryana on Tuesday. She was arrested at her flat in Charmwood Village in Sector 39. Pic ⁦@berwaltweets⁩ ⁦@the_hindu⁩ pic.twitter.com/QrC1VStTSL

The raids were conducted in Mumbai, Hyderabad, Goa, Delhi and Ranchi.

These activists have been accused of having links with the Maoist movement since long and have often been referred as overground operatives running the movement from cities.

The police allege that the activists were involved in recruitment and funding apart from promotion and planning Maoist activities, while the Maoist cadres fought in the red zones of the country.

Rao's name had reportedly surfaced when the Pune police arrested Surendra Gadling from Nagpur in June in connection with the speeches made at the Elgaar Parishad rally.

A letter was reportedly recovered from Gadling in which Rao was seen complimenting the former on the success of the attack launched by Maoists in Surjagad area of Gadchiroli in which 100 vehicles belonging to a mining company were set ablaze. 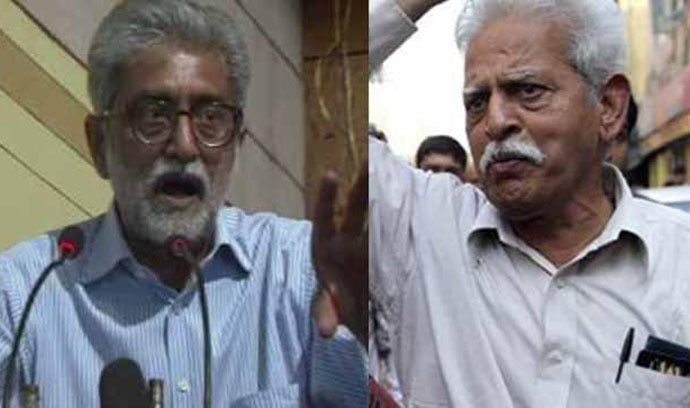 The police had also claimed that it recovered letters discussing the assassination of Prime Minister Narendra Modi from activist Rona Wilson. Wilson was reportedly close to convicted professor GN Saibaba.

Stalin Swamy's arrest is being attributed to his name appearing in emails and letters of those arrested in connection with the Elgaar Parishad rally.

Ferreira has been arrested earlier too for alleged Maoist links by the ATS and Nagpur police. He was recently discharged in all five cases registered against him.

Similarly, Rao has been arrested earlier too. He has been vocal in protesting the encounters that took place in the red zone.

Gonsalves, who is known to be a workers' rights activist, had around 20 cases registered against him for his links with central committee members of the banned CPI (Maoist) and was even convicted in one of the cases.

The raids by different teams of the Pune police began almost at the same time at all houses of all accused on the morning of August 28.

Police claimed it had received confidential information and leads regarding the involvement of the accused in the case.

The violence that happened after the Bhima Koregaon riots led to major losses across the state with Mumbai being brought to a standstill for two days.

The government came under attack for not being able to pre-empt the violence.

It will be interesting to see what turn the investigation takes.

Also read: Daniel Craig 'wants James Bond to die': Why Slumdog Millionaire director Danny Boyle deserves to be the next 007

#Sudha bhardwaj, #Gautam navlakha, #Maoists, #Bhima Koregaon
The views and opinions expressed in this article are those of the authors and do not necessarily reflect the official policy or position of DailyO.in or the India Today Group. The writers are solely responsible for any claims arising out of the contents of this article.