BJP, please beti bachao, from your own MLA and his grandson

Chaudhary Udaybhan Singh shot to fame when he threatened a lady SDM. Earlier, his grandson allegedly forcibly kissed a woman and beat up her friends. Will the BJP please save women from men like this?

When the BJP government came up with the admirable ‘Beti Bachao, Beti Padhao’ (educate the daughter, save the daughter) campaign, a lot of its own legislators apparently missed the memo.

The latest in the list is the party’s Fatehpur Sikri MLA Chaudhary Udaybhan Singh, who, according to a video going viral on social media, recently thundered at a Sub-Divisional Magistrate (SDM) — Garima Singh of Agra’s Kirawali — for not having an ‘inkling of his power’.

The video is telling — a man in a position of power, needing a whole mob of his supporters around him to threaten one woman — who still manages to stand her ground.

Garima Singh is one half of the government’s slogan: the beti who did get education and empowerment.

SDM Garima Singh: Even if he(BJP Agra MLA)was unhappy with something, he could've talked in a better way. The way he talked to a public servant isn't right. A procedure has to be followed, I can't discard orders&take steps in other ways.He shouldn't have spoken like that,I'm sad. pic.twitter.com/YxbilTeiEK

The MLA of the ruling party — apoplectic with rage at his sense of entitlement being challenged by a woman — is the reason the ‘beti’ needs saving.

According to reports, Udaybhan Singh had gone to the SDM’s office over a matter of compensation to farmers whose crops had been damaged. Garima Singh insisted on due process. The MLA did not quite like it. Once he started yelling at her — ‘Don’t you understand my power, I am an MLA… a servant’ — the crowd quickly joined in, chanting ‘SDM Murdabad’.

Such is the MLA’s power.

This power has apparently been on display before this too — in even more worrying circumstances.

Udaybhan Singh’s grandson, Kunal Chaudhary, was in September booked for several crimes, including sexual assault. Going by the police’s account, Kunal had quite an eventful night; he first forcibly kissed a video jockey at a restaurant and beat up her friends, then beat up one of the friends' brother, then threatened a man who broke up that fight, then kidnapped another man to get the whereabouts of the man who broke up that fight.

He is yet to be arrested.

Kunal, unlike SDM Garima, must have been quite conscious of his grandfather’s power, to allegedly attempt all this in one night.

The police too must have been equally aware; perhaps that explains he has not yet been arrested.

Udaybhan Singh’s explanation for all of this was that ‘people involved in illegal betting were trying to frame’ his grandson.

You might not be able to make the connection between illegal betting and forcible kissing, because, of course, you lack the MLA’s power.

If these functions are being performed by men such as Chaudhary Udaybhan Singh, we need to look at ‘Beti Bachao, Beti Padhao’ in a whole new light.

India’s women need to be saved — beti bachao — from the appalling fate of having such men in positions of power.

As many as 48 MPs and MLAs in the country have cases related to crimes against women stacked against them, according to a report by the Association for Democratic Reforms (ADR). Of these, the highest number — 12 — is from the BJP, the party in power at the Centre and most of the states.

India’s women need to be saved — beti bachao — from political parties who don’t think a man accused of such crimes should be suspended from their groups. 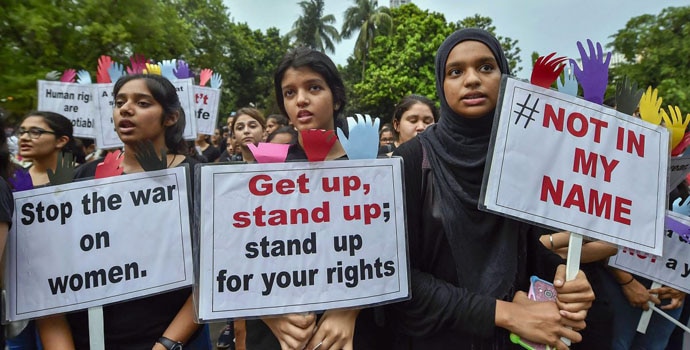 India's daughters need saving from men who think their entitlement is bigger than a woman's dignity. (Photo: PTI/file)

India’s women need to be saved — beti bachao — from parties who don’t think such a charge should diminish a man’s chances of getting an election ticket.

No wonder the BJP was conscious of the need for ‘Beti Bachao’.

The ruling party has articulated the problem loudly and clearly. We have repeated their slogan as well.

What remains to be seen now is if it can come up with any real solutions.

After all, its MPs and MLAs do have a lot of ‘power’.