The move brings to the fore the party's duplicity in using religion to strengthen its hold over power.

On January 4, 2011, Pakistan's Punjab province governor, Salman Taseer, was shot while he was getting into his car in an Islamabad market. He died on the spot. Taseer was on the hit list of fundamentalists in his country over his defence of a Christian woman who was condemned to death under the blasphemy laws of the country. 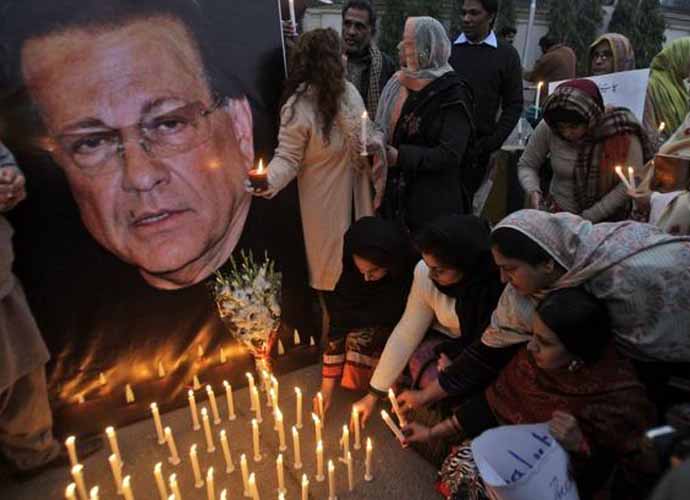 Salman Taseer had to pay with his life for opposing Pakistan's blasphemy law. (Source: Reuters)

A month later, religious minorities minister Shahbaz Bhatti, a Christian who spoke out against the laws, was shot dead in Islamabad, underlining the threat faced by critics of the law.

The Human Rights Commission of Pakistan has done extensive research to show how the law is an instrument of suppression used especially against the minority communities.

Former journalist and member of Pakistan's Parliament, Sherry Rehman, who had moved a private member's bill to amend the law, seeking introduction of provisions to prevent its misuse and reduced sentencing, faced stiff opposition leading to her bill being withdrawn. What followed was worse — for a while, Rehman had to remain confined to her house because people were baying for her blood for speaking out against the law that has seen thousands in Pakistan either thrown into jails or executed for 'hurting religious sentiments'.

In short, the law to protect religion itself became so sanctimonious that people could be killed for speaking out against it. In a way, any word spoken against the law is seen as an attack on religion itself, which is a punishable act.

While hundreds of activists and intellectuals are fighting the draconian provisions of the law in Pakistan, a state in India, on August 21, took a step towards introducing blasphemy laws in this country. Assault on free speech: Amarinder Singh is playing with the sentiments of free thinkers and speakers. (Source: PTI)

Two earlier bills, amending the CrPC and IPC, passed by the Punjab Assembly in 2016 during the previous SAD-BJP regime had mandated life imprisonment for any sacrilege of the holy Guru Granth Sahib. The bills were introduced after several incidents related to the desecration of the holy book in various parts of the state were reported in 2015. The earlier bill passed by the state Assembly in March 2016 had been objected to by the Centre on the grounds that it should include punishment for sacrilege against all religions and not exclusively for the Sikh religion.

So, while secularism may be based in the philosophy of the state remaining equidistant from all religions, the state, it seems, also wants to be equally close to all religions.

So, a more 'secular' bill has now been passed.

As part of the new bill, Section 295AA will be inserted in the IPC to provide that, "whoever causes injury, damage or sacrilege to the Guru Granth Sahib, the Bhagvad Gita, the Quran and the Bible with the intention to hurt the religious feelings of the people, shall be punished with imprisonment for life."

Interestingly, the IPC, which contains an entire chapter on "Offences Related to Religion", which includes 295A, does not define the terms "religion" or "religious".

In the SP Mittal vs Union of India case, the Supreme Court defined religion as a "matter of belief and doctrine concerning the human spirit expressed overtly in the form of ritual and worship".

So, the law that the Punjab government is trying to push through will make punishable by a life term any attempt to hurt the religious (we can't definitely say what that is) sentiments (a fuzzy area) of people.

Just how badly this infringes upon the rights of the people was proven when Kiku Sharda was arrested for mimicking Gurmeet Ram Rahim Singh, who is currently in jail for having raped women who came to him for spiritual guidance. The charge against Sharda was that he had hurt the sentiments of Gurmeet's followers.

Kiku was booked under section 295A of the Indian Penal Code (outraging religious feelings of any class by insulting its religion or religious belief).

Hurt sentiments have no visible injury marks to offer and hence, hurt can be alleged even if it doesn't exist. Hurt is also felt more acutely when there is an audience pandering to those hurt.

Many people in India, just like the rest of the world, carry fragile sentiments and wear religion on their sleeves rather precariously. From a movie to a fictional book, we can and have been claiming hurt on umpteen grounds, then burning public property and rampaging on the roads with many similarly hurt beings.

As collectives who constitute vote banks, our hurt can easily translate into a political economy, pandering to which can boost the fortunes of both parties and their leaders.

Blasphemy laws are a dangerous tool that is almost always used against the marginalised and defenceless. It is a serious infringement on the people's freedom of speech. That this law is being pushed for in a Congress-ruled state once again brings to the fore the party's duplicitousness in using religion to strengthen its hold over power. The irony of the situation grows even more stark when you recall Congress leader Shashi Tharoor's recent warning against Indian society providing a 'Hindu Taliban', the Taliban, among other groups, known to be very keen on blasphemy laws and cruel punishments.

This is indeed a dangerous beginning — it needs to stopped in its tracks.

Religion has survived thousands of years of human onslaughts and attacks. The spiritual is so vast, it doesn't need to be 'defended'.

However, our freedom to speech does.

Also read: The Minority Question: In Pakistan, the rise of Imran Khan has Ahmadiyas and Shias in fear

Post your comment
#Punjab government, #Amrinder singh, #Freedom of Speech, #Blasphemy law
The views and opinions expressed in this article are those of the authors and do not necessarily reflect the official policy or position of DailyO.in or the India Today Group. The writers are solely responsible for any claims arising out of the contents of this article.