Is cannabis a serious menace or a recreational intoxicant that should now be legalised?

India Today Editor-in-Chief talks about how , in the September 28, 2020 edition of the India Today Magazine.

On September 9, the Narcotics Control Bureau (NCB) arrested Rhea Chakraborty, Bollywood actress and former partner of Sushant Singh Rajput. She was detained under the draconian provisions of the Narcotic Drugs and Psychotropic Substances (NDPS) Act, 1985, for the illegal possession, transportation and purchase of cannabis. The NCB in its charge-sheet said it had recovered 59 grams of weed and five grams of a hash-like substance from three other suspects. Despite not being in possession of the drug herself, the NCB alleges they have enough evidence to prove that Rhea procured the drugs for the deceased actor. She has also been clubbed with drug peddlers and made out to be a part of a syndicate. In the application of its provisions, the NDPS Act seems to make little distinction between the consumer, the street peddler and the big dealer of the drug who sources it in bulk. 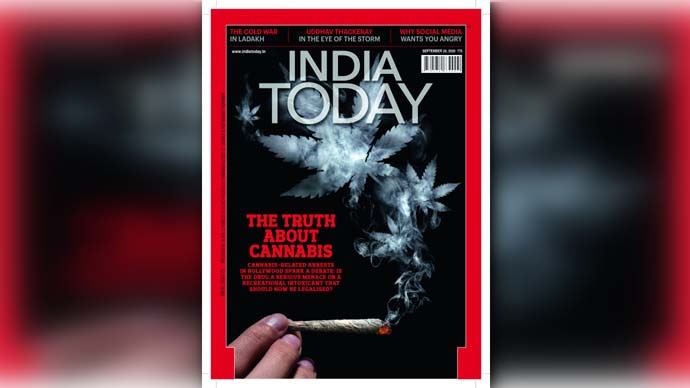 Cannabis consumption is widespread in India. An estimated 30 million people consume cannabis in the country, of which 13 million use weed and hash, derivatives of the cannabis plant. Cannabis has cultural acceptance in India—it finds mention in the Vedas, and the Hindu god Shiva is widely revered as the Lord of Bhang. A 2018 study by German data firm ABCD, which sourced figures from the United Nations Office on Drugs and Crime, placed Delhi third on a list of 120 cities in the world with the highest annual consumption of cannabis.

There is, meanwhile, a petition before the Delhi High Court seeking the legalisation of the drug. The move has a potted history. The British gave up attempts to ban cannabis in India after a survey in 1894 revealed how widespread its consumption was. Reviewing that report almost a century later, the CSIR reiterated the finding in 1957. The policy changed dramatically in 1985 with the enactment of the NDPS Act, which criminalised the sale and consumption of cannabis.

This Act has seen the State invest disproportionate resources into prosecuting consumers. A study last year by the Vidhi Centre for Legal Policy noted that most people arrested for cannabis possession are the poor and marginalised, while the bigger sellers escape unscathed. Cannabis falls under the category of what are called recreational drugs. Criminalising its cultivation and sale hasn’t curbed its production or consumption in India. There is thus an argument for regulating its sale and allowing states to earn from it just as they do from the sale of alcohol and tobacco. Globally, in the past decade, countries in South America, Europe and some states in the US have legalised the consumption of cannabis for recreational purposes. The ABCD report estimates New Delhi could raise up to Rs 725 crore a year and Mumbai Rs 641 crore, if cannabis were taxed at the same rate as the most popular cigarette in the city.

The enforcement agencies could then focus their resources on tackling the use of far more serious drugs such as heroin and cocaine. Those opposing legalisation argue that smoking cannabis could lead to lung cancer and that it is a stepping-stone drug, a gateway to the use of cocaine and heroin. However, the same can be said for the excess consumption of alcohol and cigarettes—both can be addictive and harmful to health. Besides, by criminalising a widespread activity, you encourage a vast criminal network, especially when big money is involved. The cannabis business in India is estimated to be worth Rs 1.29 lakh crore.

Our cover story, ‘The Truth about Cannabis’, written by Associate Editor Sonali Acharjee, looks at the inconvenient reality behind this debate—that this substance is already widely and routinely consumed. As the former Narcotics Commissioner Romesh Bhattacharjee told her, “Sensitisation and dialogue are more effective in curbing addiction than half-hearted criminalisation.”

History has shown that three activities will continue to flourish in some form or the other when they are banned or criminalised—gambling, prostitution and the consumption of any kind of intoxicant. It is time we faced up to the reality of the widespread use of cannabis in India.

(India Today Editor-in-Chief's note for the cover story, The Truth About Cannabis, for September 28, 2020 issue of India Today magazine)