Why BJP government is responsible for CBSE paper leak

The board exam mess is a symptom, not the disease.

The Central Board of Secondary Education (CBSE) paper leak, terrible as it is, is a symptom of the disease, not the disease itself. The disease is toxic and runs deep. It's a disease that the BJP government has spread, obsessed as it is with rewriting the past and rewiring the future. So obsessed, that it is systematically undoing contemporary institutions.

It's not merely central universities, such as University of Hyderabad, which saw the tragic suicide of Rohith Vermula, Jawaharlal Nehru University, which has seen a series of protests against attempts to stifle students – whether it is on the colour of their politics or their accusations of sexual harassment – and Benaras Hindu University, where authorities decided it was easier if women stayed indoors because they could not guarantee their safety on campus after certain hours. It’s a systematic assault on institutions in the name of removing any Nehruvian imprint. 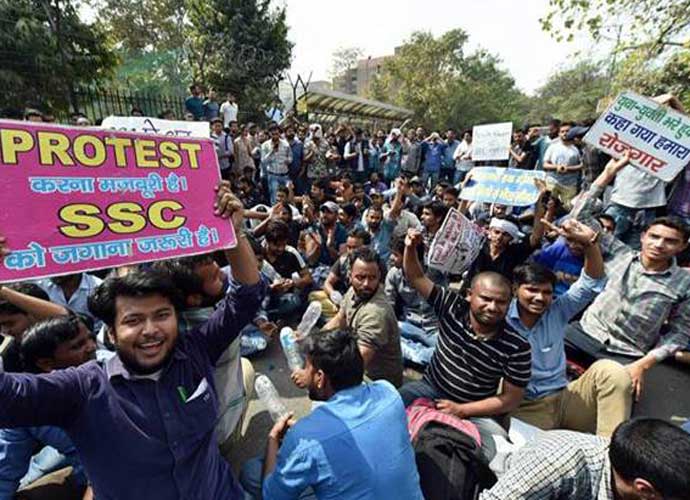 In doing that, they’ve allowed indecision and medicority to flourish. Rajesh Chaturvedi, an IAS officer appointed for a five-year term in 2016, took some tough measures, from asking affiliated schools to furnish details about their fee and facilities to instructing them to follow only those textbooks published by NCERT.

Chaturvedi is now director-general of the National Skill Development Corporation, which either means he is very good at his job (in which case why was he removed) or that he is not (which proves the point that neither education nor young people is a big priority with the BJP government).

The CBSE is currently headed by a Gujarat cadre IAS officer, Anita Karwal, who was additional secretary in the Human Resource Development Ministry and Gujarat Chief Electoral Officer during the 2014 General Elections. She has been noticeably low key and was not exactly very proactive when the leak broke, leaving it mostly to Secretary (School Education) Anil Swarup to address a press conference two days later.

There are two issues here, which are symptomatic of the deeper problem with the BJP government’s lack of understanding of this crucial portfolio. One is the selection of key personnel, which seems to be guided less by qualification and more by convenience.

The CBSE, over the past few years, has been headed by professional educators who have a comprehensive understanding of issues. Ashok Ganguly, who headed the board between 2000 and 2008, was succeeded by Vineet Joshi, who was secretary in the CBSE, and continued as chairman till 2014. Joshi, a 1992-batch IAS officer from Uttar Pradesh, introduced the Continuous and Comprehensive Evaluation (CCE) system in schools, which has since been overturned by this government.

But it’s the years after Joshi that tell the story of the BJP government's cavalier handling of this critical portfolio – in 2015, Irani’s choice and ministry official Satbir Bedi’s appointment was not cleared because of lack of educational administration. Irani’s second choice, Sarvendra Vikram Bahadur Singh, was also rejected by the Department of Personnel and Training.

Chaturvedi was appointed after two full years of dithering to find a person to head a board that proudly says it has – with the addition of the NET, the exam for grant of junior research fellowship and eligibility for assistant professor in institutions of higher learning –become the largest exam-conducting body in the world. Gigantism is a big issue with this government, as is its desire to be the first off the block in everything.

This story of poor selection of personnel is repeated across most educational institutions in this government. But the other issue this leak highlights is this – the BJP government's habit of undermining institutions.

The NTA will begin with JEE and NEET, but will take over the charge of conducting other such tests as well. So what happens to the CBSE, which conducts JEE, NEET, Central Teacher Eligibility Test (twice a year), UGC’s National Eligibility Test (twice a year) and the entrance test for Jawahar Navodaya Vidyalayas, and how will these two organisations interact with each other?

There is no clarity. But then this is a ministry that has been sitting on the late TSR Subramanian’s excellent draft on changes needed in the education system – among the many things it recommended is that an Indian Education Service (IES) should be established as an-all India service, with officers on permanent settlement to state governments but with the cadre-controlling authority vesting with the HRD ministry. It also said that the outlay on education should be raised to at least 6 per cent of the GDP without further loss of time. The reality is that the Union Budget 2018 allocated only 3.5 per cent to education.

Clearly, the government doesn’t take young people seriously, beyond mouthing platitudes. The Staff Selection Commission examination leak has already created a lot of resentment among young people in a market where jobs are few and far between. The protests against the CBSE leak are continuing, and its handling by the HRD Ministry has not helped. Perhaps the BJP government has forgotten that students do end up as voters.