As a community, Biharis generally make news when they are beaten up in other states, or when a politician slams them to boost his son-of-soil cred.

However, come November (or late October), Bihar, and Biharis, hit the national consciousness for a whole different reason — for two days, news channels flash visuals of riverbanks, the Arabian Sea, even the Atlantic Ocean, lined with devotees, knee-deep in water, raising soops (cane baskets) full of fruits and diyas to the sun. For two days, this is the scene at several riverbanks, the Arabian Sea, even the Atlantic Ocean. (Photo: Reuters/file)

The Bihari identity is defined by litti chokha, thekuas, unwelcome-but-indispensable migrant workers, IAS officers — and Chhatth Puja. While the other markers have existed for decades, Chhatth has started gaining national prominence only in the past few years.

As a festival, Chhatth is unique, in many ways. You have to have lived in Bihar, UP, or Jharkhand to know the mass religiosity — sans hysteria — the festival evokes. It is tough: the rules, involving a 36-hour fast, are exacting, and strictly enforced. But it is also one of the most democratic festivals — strictly between devotee and God, no role of priests, no expensive offerings.

There are many reasons Purvanchalis hold it dear, and its rising profile nationally is proof of both how inextricably the festival is part of the Purvanchali mindscape, and of the rising social and political significance of a community long used as cheap labour and punching bag.

There are several legends behind Chhatth — after returning to Ayodhya, Ram and Sita observed a fast and conducted a yagna for Surya devta, the Sun god. Draupadi, distressed by her husbands’ never-ending troubles, was advised by sage Dhaumya to fast and pray to the Sun. Karna, the sun of Surya, organised an elaborate pooja for his father. Some even say the festival traces its roots to pre-Vedic times, when man worshipped nature, and the sun, as the source of light and nourishment, held pride of place.

But the legends are not what make the festival important, or unique. A Purvanchali can for once give up the lights of Diwali, even stay away from the colours of Holi, but Chhatth cannot be given up. It evokes equal parts fear and fervour, both as pious as they are fierce.

Chhatthi Maiyya is easily — and disastrously — offended, but is a generous giver of boons. But most importantly, Chhatthi Maiyya is open to devotees of all castes, and accepts the same humble offerings — pomelo, sweet potato, water chestnuts, banana, all locally available, seasonal fruits — from all.

In a society as caste-riven as Bihar’s and UP’s, the importance of this cannot be overstated — on the days of Chhatth, every fasting devotee is equal, in the eyes of God, and even society. The power and profundity of the sight of rich and poor, Brahmin and Dalit, taking a holy dip in the same water can be truly understood only by those who have felt in all keenness the razor-sharp caste divides of Purvanchali society.

Even the deities worshipped during Chhatth — Surya and his two consorts, Usha (rising sun), and Pratyusha (setting sun) — hold important messages: the Sun shines equally on all, and the dying light is as much worth worshiping as the rising light, for all power and influence are ephemeral and cyclical. Chhatth is a reminder that the setting sun is as much worth worshiping as the rising sun. (Photo: Twitter)

The person actually observing the puja has to fast, without water, for 36 hours, and the pangs of hunger and thirst are the same for all. But many others have to pitch in for all the elaborate and inviolable rituals — someone will cook the prasad, someone has to decorate the ghat (riverbank) where the puja will be observed, yet others have to arrange the fruits and sugarcane to be offered to God. The entire community, thus, gets involved to make one enterprise successful.

Chhatth, thus, is far more than a three-day ritual for Purvanchalis — it is when religiosity, and divinity, touches their lives more than on any other occasion. Since the festival is unique to the region, for migrant Purvanchalis, it also becomes the ultimate identity marker, the un-ignorable tug of home.

For years, the native did return home for the festival. Trains to Bihar and UP would be booked to capacity in October-November, as sons and daughters across the country saved their holidays all year round to go home for Chhatth.

But as the community becomes more confident socially, and more significant politically, migrants are not just flocking home, Chhatth is spreading to wherever they are.

It is not easy being a Bihari in other states — you come from a ‘poor, illiterate’ state, are presumed an importer of crime, your accent is mocked, your motives suspect. It would take courage to come out as a community and occupy public spaces — the banks of water bodies — very conspicuously. But such is the power of Chhatth: you cannot not celebrate it. 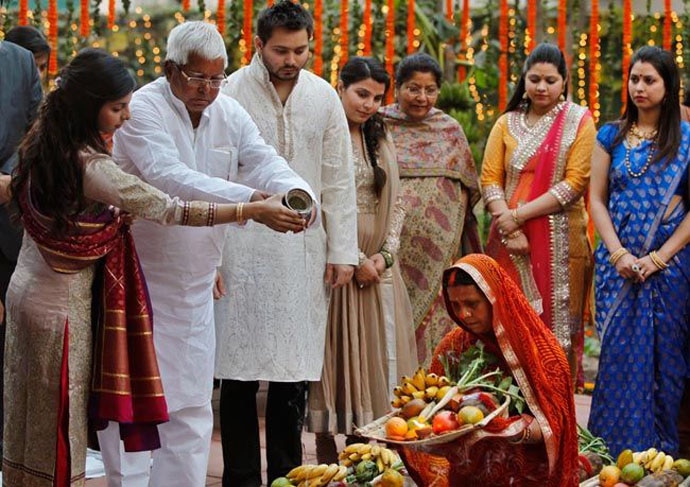 Lalu Yadav for long was the only 'celebrity endorser' of Chhatth. (Photo: AP/file)

The festival has become popular without Bollywood, or celebrities, endorsing it. Indeed, the only public figure one can remember celebrating Chhatth is the much-mocked Lalu Prasad. This is proof of how the festival’s popularity has spread bottom-up in society — for something from the blue-collar class to become noticeable, it has to have numbers behind it. So many migrant workers started celebrating Chhatth in other states that it could not be ignored anymore.

And of course, politicians noticed.

Bengal Chief Minister Mamata Banerjee was among the first CMs to personally get involved with directing arrangements for the festival. In Delhi, Chhatth has been a credit-tug-of-war among the BJP, the Congress, and the AAP. In Mumbai, making Chhath arrangements is a preferred method of the BJP and the Congress to appeal to MNS-singed migrants.

The rising visibility and the rising political profile of Chhatth are proof that a much-maligned community has arrived, and is making a home of cities that sheltered but mocked them.

As more people become familiar with the spectacle of Chhatth, one hopes more learn the festival’s message, too.

Also read: Why Chhatth Pooja is special to my Bihari heart

#Manoj Tiwari, #Migrant workers, #Bihar, #Chhath Puja
The views and opinions expressed in this article are those of the authors and do not necessarily reflect the official policy or position of DailyO.in or the India Today Group. The writers are solely responsible for any claims arising out of the contents of this article.