The responsibility of safe sex that has been held so tightly by men has gone continuously unfulfilled.

In 2012, former Supreme Court judge and Press Council of India chairman Justice Markandey Katju offended millions of Indians when he said “90 per cent Indians are idiots". The context calling for that sweeping assertion notwithstanding, six years later, when it comes to safe sex, the statement holds true even as it falls short by a margin. Durex, the internationally recognised brand of contraceptives and sex toys tweeted on March 5, “What’s happening India? 95 per cent of Indians don’t use condoms! We’d love to know why.”

That is a shocking statistic, especially when you consider India’s population. In essence, it would mean that 1.25 billion Indians don’t use condoms. Does that figure have any basis in fact? Unfortunately, yes.

What’s happening India? 95% of Indians don’t use condoms! We’d love to know why?

According to the 2015-2016 National Family Health Survey (NFHS), only 5.6 per cent of the sample set said they used condoms for birth control. What is worse than the worrisome figure is just how little seems to have changed since the previous NFHS, conducted in 2005-2006, which found that as few as 5.2 per cent Indians used condoms. In fact, an analysis of the two consecutive surveys found that the use of “any modern method of family planning” — sterilisation, contraceptive pill, intra-uterine device (IUD), post-partum IUD et al — among women of child-bearing age (15 to 49) decreased six per cent over ten years, despite greater awareness of birth-control methods and an improvement in family planning services.

Why is the number of those using condoms so shamefully low in India?

It is certainly not a matter of awareness, or its lack thereof. More Indians today are aware of contraceptive use, HIV/AIDS and sexual health in general. In fact, men seem to be more aware than women. In 31 of the 35 states and union territories surveyed, men displayed more comprehensive knowledge about HIV/AIDS and Sexually Transmitted Infections (STIs) than women. The NFHS data, however, makes no mention of the third gender.

Despite that, however, it is the reluctance of the Indian male that is causing the downfall in contraception statistics. 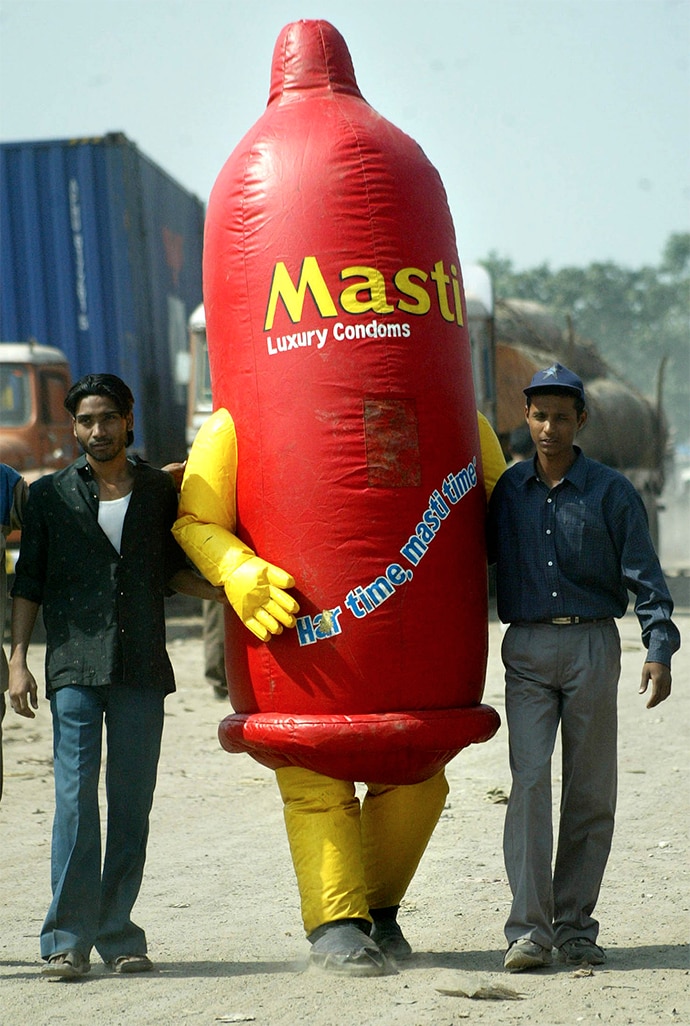 Possible reasons for this are misconceptions such as "condoms reduce sexual pleasure" and "vasectomies make men sterile". This comes at a cost. The skewed power dynamics in a majority of Indian heterosexual couples — as was excellently depicted in Lipstick Under My Burkha by Konkana Sensharma and Sushant Singh — often lets men dictate what contraceptives to use, if at all. As a result, in order to avoid unwanted pregnancies, women often resort to morning-after pills, the frequent use of which can be severly detrimental to health.

Another likely explanation for the abjectly poor use of condoms in India is social awkwardness. Thanks to the stigma around sex in India, buying condoms in India can in itself be an embarrassing task. While the stigma may be easier to deal with in metropolitan cities, in towns and villages, the situation is starkly different. According to the BMC Public Health report for 2011, in rural India, while 96 per cent of the young men surveyed knew where to access a condom, they felt uncomfortable or embarrassed doing so in their own villages or nearby spots because of socio-cultural norms that prevented them from using contraceptives.

Similarly, a 2005 study called “Linkages between masculinity and HIV/AIDS in North India”, conducted by students of the University of North Carolina, found that “masculine ideals of sexual conquest, experimentation, and entitlement” are major contributing factors to risky sexual behaviour in India. The study noted that of 75 respondents, some men intentionally ignored information about STIs in order to maintain a sense of normalcy.

“The motivation for this attitude often seems rooted in a sense of entitlement to uncomplicated and ‘real’ sex, in which there is no place for a condom which breaks the flow of the encounter. Condoms are preferably seen as contraceptive devices, and nothing more. Often men project that females also like it better without condoms and that it is them who do not want to use them, even though few females (sex workers) are in the position to ask without risking losing their partners (clients),” the authors observed. Other important aspects that discourage condom use — and work in tandem with social stigma — are personal reluctance, prevailing moral norms and taboos.

Despite its men choosing not to buy condoms, India’s shops continue to treat male condoms as a product of importance, especially compared to female condoms — a more effective means of protection against HIV among women — in shops across the country.

A Mid Day report from November 2017 found that internal condoms or female condoms are either too expensive or sold at a premium over the marked price, or just generally unavailable at medical stores in Mumbai. The situation may not necessarily be different for other parts of India.

Men are at fault here. For whatever reasons — be it social, cultural, religious, or other — Indian men have held the responsibility of safe sex by preventing women from sharing it. And they have shamefully failed to fulfil that responsibility.

Also read: How not to remember Sridevi