DailyOh! When PM asked for diya and BJP leader responded with katta, to why it is a pink supermoon

BJP leader Manju Tiwari, along with all the cracker-enthusiasts from Sunday night, are covidiots.

Staying home and staying safe? Please do, given that the number of people testing positive for coronavirus in India have shot up dramatically, crossing the 4,000-mark as of this morning. The confirmed positive cases stand at 4,067 till now, and 109 Covid-19 deaths have been reported across the country. From Sunday, over 400 people tested positive in just 12 hours. And that includes Bollywood producer Karim Morani’s daughter Shaza, who is the first case reported from the posh locale — Juhu — in Mumbai, and has sent people in a tizzy. Others who share the neighbourhood include Amitabh Bachchan, Shatrughan Sinha, Hrithik Roshan and Jeetendra, to name a few. Shaza is the second Bollywood celebrity to test positive after singer Kanika Kapoor. Clearly, this virus doesn't discriminate. It attacks everyone it can. And we need to do all we can to ensure it doesn't spread. Today, India enters the “crucial phase” in its fight against coronavirus. It is “crucial” because the two weeks from today will tell us the impact of the nationwide lockdown on infections. The Public Health Foundation of India says that the cases being reported in the first two weeks of the lockdown are a mix of old and new cases. This is because the incubation period for clinical symptoms to come out can extend up to 14 days after one has contracted the infection.

However, it is only in the third week of lockdown and the week thereafter that the impact of lockdown on infectivity can be assessed. And, because this is the time that the authorities will have to think of the next decision — whether to extend the lockdown or something else. As of now, as we know, the lockdown is supposed to be over on April 14. But of course, it doesn't mean April 15 is celebration day. We need to stay home, and stay safe, and fight this invisible enemy.

It was to mark this fight that Prime Minister Narendra Modi asked all Indian citizens to light a lamp on Sunday night. From India's richest man Mukesh Ambani and his wife Nita, superstar Rajinikanth, Akshay Kumar, Hema Malini, to India's poor, many homeless on the streets, responded to the PM's call by lighting a lamp or candle in the hope of kicking this virus away. But our over-enthu brigade, as ever, went ten steps ahead and started bursting crackers. Because if you're lighting diyas, why not phuljharis, right? We mean, is this meant to be a celebration of the crisis that we are in? What were they even thinking? And what was BJP’s Mahila Ziladhyaksh from Balrampur in Uttar Pradesh thinking (if she was thinking at all, that is)? She beat all covidiots by a light-year and fired shots aimlessly in the air. She then posted it on social media (because stupidity needs to be documented), saying the firing was after lighting the lamps and that it was to chase the coronavirus away. By now, the coronavirus might have died of shame. FYI, celebratory firing is illegal in Uttar Pradesh. And leading the team of our cracker-bursting covidiots today is Manju Tiwari, our Covidiot Of The Day.

Video of BJP Mahila Ziladhyaksh Manju Tiwari from Balrampur firing in the air fs part of #9बजे9मिनट . Video uploaded from her own ID which went viral. #bjp #IndiaFightsCoronavirus @balrampurpolice pic.twitter.com/1PBPHMMA9G

Then, of course, there are also those who are utilising... err, wasting their time by trolling celebrities on social media for not donating (or declaring their donations) to fight the corona crisis. A fitting reply came from Amitabh Bachchan, who wrote a poem on why he does not want to declare his donation. But when you're a celebrity, the concept of neki kar, darya mein daal doesn't quite hold. So we soon got to know what Amitabh Bachchan has donated: he is providing monthly ration for 1 lakh daily wage earners. You can read more on that here.

In the past, Sr Bachchan adopted Kumthe village in Sangli district in Maharashtra when the place was battling a bad drought. It was 2004. The village was famous for its quality grapes before calamity struck. After the drought, the director of a youth forum got in touch with Bachchan and requested him to adopt the village. So he did.

Not everyone likes to talk about what they donate. A reminder for all trolls trolling all people for not declaring their donations: there's this saying that when you do charity, your left hand shouldn't know what your right hand is doing. Hope that helps in these corona times too.

Now you must have come across the manner in which coronavirus spreads: through fomites. So what are fomites? Let us tell you, because fomite is our Word Of The Day. A fomite is an object or material likely to carry an infection. This could include clothes, utensils, and furniture. It is derived from the Latin word “fomes” which literally means tinder. And by tinder, we mean the dry, flammable wood used for lighting a fire. Not its newer, cooler representative, the dating app. Although if you see, the logo of Tinder is a flame. Yes, from the same flammable wood.

Now let's move to news from other parts of the globe, given that this coronavirus pandemic has brought the entire world on its knees; from state heads to royals. Did you hear Queen Elizabeth II’s address on Sunday? We hope you did because this is only the fifth time in the monarch’s 68-year reign that she gave a televised address to the people. This was also the first-ever time she gave a televised address in response to a pandemic.

In this rare address, she spoke of a war-time spirit of self-discipline and resolve to fight the coronavirus pandemic which has killed nearly 5,000 in her country and about 70,000 people globally. She recalled Vera Lynn’s wartime song, and said “we will meet again” and assured the people that "better days will return".

After the Queen's first son, Prince Charles tested positive for Covid-19 (and subsequently recovered), British Prime Minister Boris Johnson was tested positive for the coronavirus. Johnson was admitted to the hospital for the same barely an hour after the Queen's address. Boris Johnson is the first known head of government to fall ill with the virus. The PM’s office was quick to reassure people, stating that it was a “precautionary step” and that Johnson still very much remains in charge of the government. The 55-year-old had been quarantined at his home since he tested positive on March 26. His government is furious with China and its initial callous handling of the coronavirus outbreak. The Queen has made only five such speeches in her entire 68-year-reign. (Photo: Reuters)

Now coming back to the city where it all started. Wuhan.

Wuhan is now all set to reopen after the long period of lockdown and inactivity since January 23. The city has been lying dead and barren for months now, and the government has finally decided to lift the lockdown formally from Wednesday. While you may not have heard of Wuhan before this deadly outbreak, did you know that this largest city in the Hubei province was once the capital of China? It was in 1927 under the Kuomintang (KMT) government led by Wang Jingwei. The city later served as the wartime capital of the country for ten months in 1937, during the Second Sino-Japanese War.

In good times, Wuhan was known as the “Chicago of China” and is famous for its avenue of cherry blossoms and the famous Wuhan University. A place to you must consider to visit once the virus clears and times get better (again). Remember the Queen’s words: "better days will return". 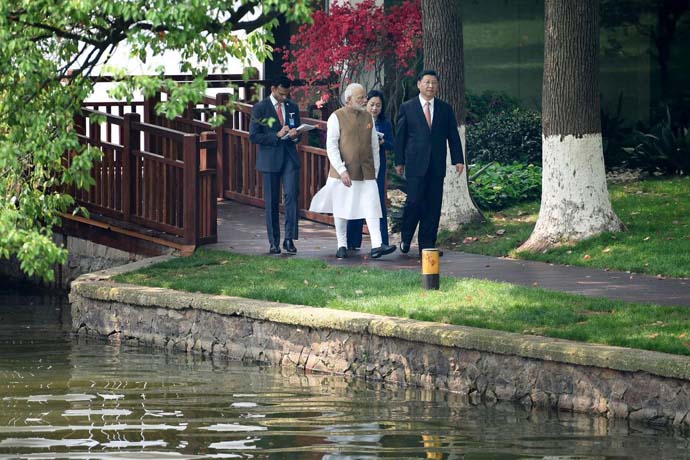 Now, a little break from all this coronavirus-related news. We know it's been a tough time, but such is the nature of news these days.

In Chernobyl, a forest fire broke out on Saturday night, sending the radiation levels shooting up. The forest fire broke out near the nuclear accident site. Ukrainian firefighters and authorities have been toiling with that too while the coronavirus outbreak in the country has infected 1,319 people and left 38 dead.

This took us back to 1945, Hiroshima, where radiation levels were once brought down by rains. A typhoon hit Hiroshima when the city was grappling with the relief work after the nuclear attack. On September 17, 1945, the Makurazaki Typhoon hit Hiroshima, and the rains that followed flooded the temporary tents that served as hospitals for the nuclear victims. However, there was a silver lining to this dark cloud too. The floods brought down the radiation levels. Nature has its way of balancing things out. We hope Chernobyl also is graced with some such balance.

On to something that will brighten up this gloomy-news Monday. Tomorrow is the night of the super pink moon. Now don’t expect the moon to be super pink. The full moon in April is called the pink moon because it is around this time of the year that the flower moss pink, or wild ground phlox, is in blossom. It makes the Earth around you look pink. And super moon is the closest the moon will get to the earth than any of the other full moons in the elliptical orbit. Basically, you will see a big, bright 'sper pink' moon up in the sky when you stop your earthly work and look up tomorrow.

While this year has a couple of supermoons between March 9 and May 7, this pink supermoon is supposed to be the biggest and brightest of the lot. If you are lucky, you might be able to catch a glimpse of it in India around 8 am on April 8 (Wednesday).

Also read: DailyOh! Why Imran Khan is a Covidiot, to when Daniel Pearl's killer said he was Pranab Mukherjee