DailyOh! Why the man who taught us hand washing died in a mental asylum to how Britain is doing it all wrong

Ignaz Semmelweis was hated for telling people to wash hands.

Another person died in India today due to Covid-19, taking the death toll to three. So far, 128 cases have been reported in the country, including those who have been cured and those who have died due to the virus. But many say the numbers are low because testing is low. Those who haven’t travelled abroad are not being tested unless they have been in close contact with those who have travelled. (Photo: Reuters)

Now, the problem with the approach is that coronavirus symptoms take time to show in individuals, meanwhile, the infected person could be passing off the virus to the next person/s. Let’s just hope health officials know better.

While many in India are concerned that testing in India is low, many across the world are worried with the approach Britain has taken to fight Covid-19. UK’s approach seems to be that it is impossible to stop people from getting infected so the epidemic should be allowed to spread to 60 per cent of the population so that herd immunity against the disease could be built. So, what is herd immunity?

Herd immunity is a form of indirect protection from infectious diseases. This form of immunity is attained when a large part of the population becomes immune to an infection either through infection or vaccination. This, in turn, provides protection to individuals who are not immune.

Have you heard about chickenpox parties? It’s also called a pox party, or flu party, among other things. So, before vaccines were available, children were deliberately exposed to infectious diseases to “get done with it”. Once you get a viral infection, your body builds immunity towards it so you do not get it again. This is why pox parties happened. It was believed childhood diseases would be less severe than diseases encountered as an adult.

At the highest risk of Covid-19 are the elderly and hence Britain’s strategy is likely to lead to scores of deaths. But talking of children and diseases reminds us we forgot to tell you that a three-year-old baby from Mumbai’s Kalyan has been tested positive for the virus. Her father has a travel history to the US and he, along with the child’s mother, have tested positive for Covid-19. We wish them, and everyone else, a speedy recovery.

You can read more about the case here.

To keep yourself safe, avoid public contact as much as possible. And keep washing your hands. We know you are doing that already. The advice is only for those not following earlier advice on washing hands. Use the sanitiser but only when you do not have soap. Why? Because sanitisers are fast running out of stock. Semmelweis was posted at the maternity ward of a hospital in Vienna. Many women in the hospital were dying of what was then called childbed fever. Childbed fever was actually puerperal fever which is caused by uterine infection following childbirth. Semmelweis tried various things but the number of deaths would just not come down.

At that time a priest used to visit the ward whenever a woman died of childbed fever and he would slowly move across the women’s beds. An attendant would walk along with the priest ringing a bell. It was thought that the sound of the bell could be scaring the women who then developed fever because of the sound and eventually died.

The priest was asked to change his route and the bell silenced. This too did not have any impact. Semmelweis was frustrated to see all his efforts fail and so he went on a break. We say, he did just the right thing.

When Semmelweis joined back, he found his colleague had fallen ill and died. Semmelweis’s colleague was a pathologist. It was common for pathologists then to die in this manner.

The pathologist at Semmelweis hospital had pricked his finger while doing an autopsy on someone who had died due to childbed fever. Semmelweis studied the symptoms and realised that the pathologist had died of the same thing that killed the woman on whose body he was performing the autopsy. It was thus confirmed that childbed fever could kill not just women but men too.

Now, the hospital had two wards — one had all-male doctors and medical students, the other had female midwives. More women were dying of childbed fever in the ward being attended by male doctors.

Semmelweis realised that the one difference between the two was that male doctors were also carrying out autopsies but midwives were not. He then came to the conclusion that while the male doctors and medical students were performing the post-mortems, some particles from the bodies must be getting stuck to their hands that passed on to the women they helped with childbirth.

Semmelweis thought that if there was a way to get rid of the particles getting stuck to hands deaths could be avoided. He ordered his staff to start cleaning their hands and instruments with a chlorine solution.

Semmelweis, remember, did not know anything about germs he was only trying to get rid of the particles stuck on hands and instruments. The other thing he wanted to get rid of was the foul smell. Chlorine helped him achieve that.

Once the move was implemented, the rate of deaths due to childbed fever came down. Problem solved? No.

Doctors blamed Semmelweis for blaming them. Now, Semmelweis never blamed them but they thought they were being blamed for causing deaths. Semmelweis lost his job and eventually died in a mental asylum.

It was after his death that the world realised his genius. But even today people do not take hand hygiene seriously and that includes medical practitioners.

Coronavirus, or no coronavirus, personal hygiene is important and it all begins with hand washing. And it DOESN’T stop at that. 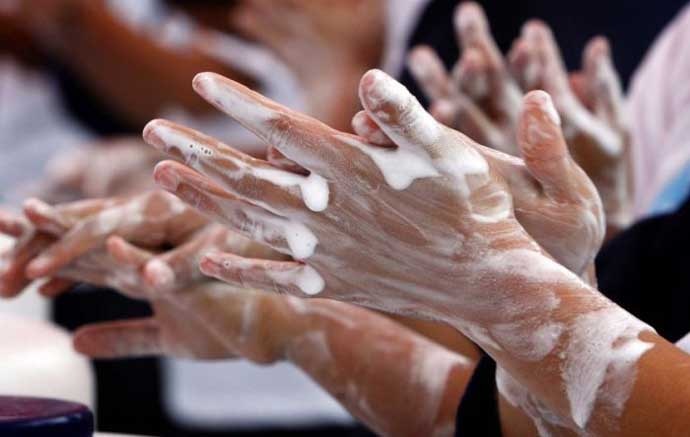 Coronavirus, or no coronavirus, personal hygiene is important and it all begins with hand washing. (Photo: Reuters)

Ensure you clean your whole body. Mind too. But, for now, focus more on the body to defeat Covid-19.

Do you know that mental and physical health have a common cord? That cord was (believed to be) Hygeia. Does Hygeia sound similar to hygiene? That’s because hygiene derives its roots from Hygeia. We will tell you how because hygiene is our Word Of The Day.

So Hygeia was the Greek goddess of health. She was the daughter (some say wife) of Aesculapius, the god of medicine. She was originally the guardian of physical health but later became the guardian of mental health also. We wonder if taking a bath makes us feel lighter mentally for this reason. There is no scientific evidence to that effect. Maybe this isn’t even a shared experience.

We will take your leave now.

Take good care of yourself.

Also read: DailyOh! How Italy once offered a quarantine model for the world to follow