DailyOh! SII and Bharat Biotech say all is well, but why Arbaaz and Sohail Khan have been booked

The two companies said they have a ‘combined intent’ to develop, manufacture and supply Covid vaccine in India and abroad.

With 20 cases added today, India has so far found 58 cases of the new strain of coronavirus. But the world still hasn’t found Jack Ma. All those found positive for the new strain have been kept in single-room isolation in designated healthcare facilities across states. Their close contacts have also been put under quarantine. The world still doesn’t know where China has put Ma, or Ma has put himself.

British Prime Minister Boris Johnson has decided to stay put in England and not be in India as the chief guest for Republic Day parade because his country is under a countrywide lockdown.

Meanwhile, Bhai’s bhais have been put under institutional quarantine at Taj Lands End in Mumbai by BMC. Arbaaz and Sohail arrived from the UAE on December 25, went straight home and then joined Bhai Salman Khan’s birthday party on December 27.  Sohail’s son Nirvaan landed in Mumbai on December 30, and followed in his dad's footsteps. Literally. People travelling to India from the UK and West Asia have to undergo compulsory institutional quarantine. Who wants to undergo quarantine in a hotel at their own expense when they can head home? And who wants to stay at home when they can head to Bhai’s birthday party? Sohail, Arbaaz and Nirvaan are learning the hard way that what you want to do is not what you should, unless you can duck the BMC. The trio will be tested for Covid when their quarantine period is over. Meanwhile, BMC is contact-tracing those who came in contact with the trio, which would include Bhai too. All the best to BMC.

All the best to vaccine manufacturers too who face challenges, of not just manufacturing the vaccine, but fighting with each other. Serum Institute of India CEO Adar Poonawalla promised a joint statement with Bharat Biotech after saying that all vaccine apart from those rolled out by Pfizer, Moderna and Oxford-AstraZeneca are safe like water.

Bharat Biotech chairman Krishna Ella has claimed the trials of his vaccine, Covaxin, are 200% safe. Vaccine safety aside, vaccine manufacturers need to keep themselves safe from attacks and counterattacks. You see, there is already vaccine hesitancy and it looks like such statements add to hesitancy, though we have no data to say by how much.

For now, both SII and Bharat Biotech have decided to opt for a truce because the vaccine is more important than corporate wars. If there is doubt around vaccines, everyone will hesitate in taking it. What is hesitancy? For one, it is the Word Of The Day. You may say it is the state of being hesitant. Like mumbling while asking permission for a night out, a day after you had a night out; or asking your boss for leave on a Friday or Monday. But those are smaller problems. We are dealing with a pandemic here. So let’s get to the big hesitancy — the vaccine hesitancy.

The World Health Organization’s SAGE (Strategic Advisory Group of Experts on Immunisation) Working Group on Vaccine Hesitancy defines hesitancy as a behavioural phenomenon that is specific to vaccine and context. Like people may be averse to taking a particular vaccine and for a particular reason, for example, religion or region. SP leader Akhilesh Yadav’s vaccine hesitancy comes from the fact that it has been produced under a BJP government. Yadav’s hesitancy could be politics too, but we have no data to say that with certainty. Since we are talking vaccines, we will stick to data and won’t talk about Yadav’s hesitancy any further.

Advocacy ads like the ones produced for polio vaccination drive can help fight vaccine hesitancy. To tackle other forms of hesitancy, being more tactful can help.

Both Covaxin and Covishield will be available for whoever wants to take it in India and abroad too. Bharat Biotech and SII are free to export their produce. The Health Ministry has clarified there is no export ban. The talk of such a ban is just 'misinformation'. Talking about exports, we want to talk about rice. But first to those who produce it.

Farmers are battling the cold and rain, which is making it colder, in support of their demands at Delhi borders. Talks between farmer unions and the government failed yesterday with farmers firm on the rollback of farm laws as the condition to end the protest, which has now crossed 40 days. Farmers have refused to end the protest till the government withdraws the farm laws. (Photo: PTI)

You got to give it to the farmers for not just producing enough to feed India, but those abroad too. Faced with a rice shortfall, Vietnam has started importing from India after several decades.

This, when Vietnam is Asia’s third-largest exporter. The thing with Asia is that it produces and consumes 90 per cent of the world’s rice. Indian Basmati, however, has a global demand.

Ever seen rice being sown? Let us paint the picture for you, if you haven’t. A well-ploughed field is waterlogged and then mostly women sow rice saplings. You will often find them singing, perhaps because that eases the physical pain of doing things. The singing part isn’t unique to India. Italy even had a word for female rice field workers — mondine. Mondines used to sing among themselves as they worked, teasing and calling out each other. Silvana Mangano went on to become the most famous mondana because she acted in Bitter Rice (1949), a story of thievery and treachery set in the rice fields of northwest Italy. 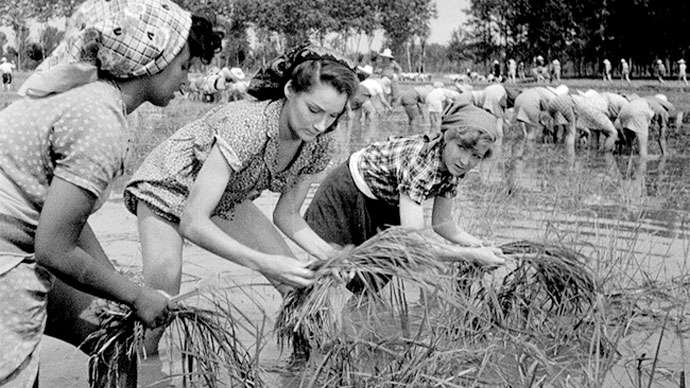 You can have rice, but you may not get chicken or egg curry to help it go down if you are in Madhya Pradesh’s Mandsaur. The administration has imposed a 15-day ban on chicken and egg shops amid a bird flu scare.

If you have eggs at home or live out of Mandsaur, you can turn them into Souffle Omelettes. As always, the recipe is on us even if the ingredients and the efforts are on you.

We gave you the recipe and the Supreme Court gave the Centre the go-ahead for the Central Vista project in a 2:1 verdict. Two judges agreed that the government has the necessary paperwork in place. One judge did not. Since two is more than one, the project will come up on a three-km stretch from Rashtrapati Bhavan to India Gate in Delhi. So, the Centre won but the TMC lost out on MLA and former cricketer Laxmi Ratan Shukla. Shukla has quit as Minister of State for Sports in Mamata Banerjee’s government. Where is Shukla headed? His resignation letter says towards ‘retirement’ from politics. But we will see if he joins another party ahead of the elections in Bengal.

Also Read: Is food wastage really that big a problem in India?