Is food wastage really that big a problem in India?

The available data suggests that food waste may not be as big a problem as is being made out, and the solutions to reduce it will have significant costs.

Among the first childhood memories is a plateful of food that I had no interest in but was supposed to polish off. My mother’s talk about wasting being bad was making no sense, what I waste would eventually be consumed by bacteria and worms, but weren’t they god’s creatures just like me? The following argument that the poor were going hungry while I was wasting food also made no sense, for why feed a full stomach if another one was empty? I had not been trained in economics then. And experience had taught me that running to my grandmother was a superior alternative to arguing with the mother.

We waste everything in some way or another. So much so, that our whole economy and society is built on a significant amount of waste of time, production, emotions, and whatnot. Step back, choose anything that’s important in your life right now, think through it, and you will find some waste. Why only food, even something like electricity has eight to ten per cent transmission and distribution loss globally and this does not include those faced by the user. So why do we bother about food waste? And why should the policymaker? Forget both of them, would your time be wasted or well used if you bothered about food waste? The link between ownership and wastage is important in understanding food destruction/loss/waste however it is named. (Representative photo: Reuters)

In my home in the past, no food was wasted. If food got stale, it was packed in paper or tiffin and I was asked to go find and feed a cow on the street. Even the skin of fruits and vegetables was used to make some food, or pickled, or dried and something useful made of it. That no longer occurs and food waste levels have gone up in my home. The food value chain then also presumably wasted less, simply because the food was relatively more expensive then. The link between ownership and wastage is important in understanding food destruction/loss/waste however it is named. Perhaps as important is the understanding of supporting infrastructure.  And underlying all of this are the economic forces that bind and stretch us all.

Just to set the bearings, the questions before us are — how much food is wasted, is that good or bad, and what should we do about it?

Someone said somewhere that 40 per cent of the food was wasted in India and this number is reported everywhere as if it were a fact. Such nice round figures don’t inspire confidence though, for that typically suggests that someone has picked them out of a hat. Admittedly, food is wasted everywhere, on the field, in transport, in storage, in processing, in wholesale and retail, in cutting-peeling-dicing, in cooking and some merely as leftover.

Some like to call the waste in the early part of the chain as logistical and infrastructural in nature, as food losses, and that in the latter part of the chain retail and household/eatery stages as food waste. But that distinction is fairly artificial, as logistical and infrastructural issues happen within households as well (storage duration, the allocation between storing and cooking, refrigeration, etc., are all arguably logistical issues at the household level). It is also typically believed that commercially prepared food is wasted more, fruits and vegetables as well, and lack of good infrastructure leads to great wastage. I also believe but have no evidence, that informal sector eateries in India do not waste much. An extremist may also include food waste due to over-consumption or consumption of the wrong kinds of foods (highly processed, sugars, etc.) but the international agencies like FAO don’t appear to include nourishment-waste as a component of food waste, and neither does our government, not yet anyway.

As per a widely quoted FAO study, different food groups have different levels of Food Loss and Waste (FLW) (See Table 1). For South and South-East Asia, fruits and vegetables have the highest proportion of FLW followed by roots and tubers followed by seafood. Surprisingly meats have a low FLW probably because the animal is kept alive till the latest possible time. And cereals due to easy storability have relatively low FLW. But estimates do differ.

A study on rice and wheat conducted in India found that barely 5.2 per cent of rice and 4.3 per cent of wheat were lost/wasted in the post-harvest phase and about 3.2 per cent on the field. Another study reported by the National Academy of Agriculture Sciences (NAAS) figures for Karnataka at 4.6-6 per cent waste in cereals, 4.6 to 15.9 per cent for fruits and vegetables and 2.7 per cent for meat and 5-10 per cent for fish. My own instinct is that the informal sector is far more careful on losses because of its manual nature and the fact that the owner is in charge of the produce through all stages than the western studies give them credit for (See Figure 1). Moreover, where there is more poverty there will be less waste. Waste in India therefore should be significantly lower than in the West. 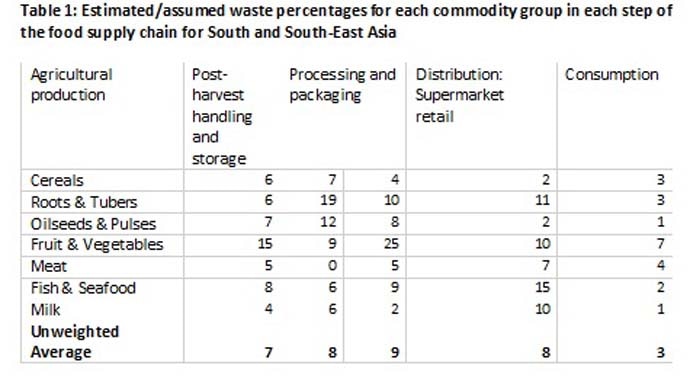 However, there is little doubt that greater and better infrastructure – roads, transport, improved drying and processing facilities, warehousing and cold storages, would help reduce food waste. But these are costly to put up and operate, and it is not clear whether putting up so much infrastructure is a superior alternative to accepting and living with the current levels of FLW.

Even the FAO, for long a great proponent of intensive infrastructure to stem FLW in India accepts that we have among the lowest levels of waste globally. “With significant wastage across all food types, per capita food loss in Europe and North America was reported to be high at about 95-115 kg/year, whereas in Sub-Saharan and South/South East Asia is much lower at about 6-11 kg/year.” The question that answers our question, therefore, is: Why waste our time on a problem that is relatively small? We have other far larger problems to focus on. That gets us to the final issue on food waste. The FCI and some other government agencies are sitting on piles of unsold grains. As per the latest estimates we have somewhere close to 700 million tonne of food grains in the central pool with the FCI, and there must be significant levels stored in the state pools as well. The more important part is that in December 2016, the total stocks were about 275 lakh metric tonne and have been increasing by a hundred lakh metric tonnes every year. Obviously, if the storage capacity is inadequate, a significant proportion of this close to 700 lakh metric tonnes of grains would be susceptible to the weather and pests.

Why is that a problem? After all, even the pests are god's own creatures. Tens of thousands of crores are spent purchasing cereals, among other things, to support the MSP. This waste could be imposing a huge hit on the exchequer. And there is also a serious environmental issue. Water is being extracted from sub-surface reservoirs, pesticides and weedicides are being used, chemical fertilisers as well; each of these harms the environment immediately and has a very serious long-term impact, affecting both our lives and those of future generations. There is no point in producing such cereals for rates in the presence of such serious environmental damage.

But here we hit upon another informational wall. While the FAO it seems provides us overestimates of wastage, the government’s FCI is feeding us with incredibly low figures. Take this passage from what the late Ram Vilas Paswan said: “Unlike public perception that there is a huge wastage of food grains in Food Corporation of India’s godowns, we have been able to control it to negligible quantity... In 2015-16, the government bought 62.3 million tonnes of rice and wheat, out of which only 3,116 tonnes of grains were wasted, which is just 0.005 per cent of the total purchase. In 2016-17, the wastage was just 0.014 per cent of the total purchase of 61 million tonnes. Similarly, the wastage for 2017-18 and 2018-19 was 0.003 per cent and 0.006 per cent respectively. In 2019-20, the government purchased 75.17 million tonnes of food grains, out of which only 1930 tonnes were wasted, which is 0.002 per cent of the total procurement.”

Naturally, if we take his and FCI's word for it, there is no problem of food waste within the Central government, and there may be some problem at the state level. But suppose FCI is not providing us with the right figures (and the CAG must have done an audit on that sometime, but we don’t find any mention of this or any significant mention of food losses in FCI's warehouses.)

We started with the question of whether food waste is a problem and what we should do about it. The available data suggests that may not be as big a problem as is being made out, and the solutions to reduce it will have significant costs. The government can, however, invest a little bit on data and monitoring studies, to ensure that informational constraints are removed. That is, the FCI's overfull warehouses do need an external audit and someone needs to fund a comprehensive study for India that is not coloured by FAO estimates.

Also Read | Food for thought: Our country does not provide nutritious food for all. The ramifications are huge

#Food loss, #Food corporation of india, #Foodwastage
The views and opinions expressed in this article are those of the authors and do not necessarily reflect the official policy or position of DailyO.in or the India Today Group. The writers are solely responsible for any claims arising out of the contents of this article.

He is the Director of Indicus Foundation and Senior Fellow at Centre for Social and Economic Progress.