DailyOh! How much will the coronavirus vaccine cost, to trouble in the air for Delhi-Mumbai flights

Rising coronavirus cases in Delhi may ground flights to and from Mumbai.

At the stroke of midnight, when the world sleeps, Ahmedabad will awake to lockdown and restrictions. It will stay awake to the lockdown till 6 am Monday. So, today Ahmedabad woke up to some panic buying with people thronging markets in enough numbers to allow the coronavirus some easy hop-on hop-off opportunity.

Gujarat Chief Minister Vijay Rupani then had to clarify that there was no need to panic because there isn’t going to be any fresh lockdown. He called the Friday night to Monday morning restrictions a 'weekend curfew', which will end when the weekend ends. Through the weekend, shops selling milk and vegetables will remain open. People in Ahmedabad shopping ahead of Diwali. (Photo: Reuters)

The restrictions have been imposed because the festive shopping has led to a sudden spike. Life for the virus, meanwhile, has been a smooth ride from festive buying to panic buying.

The Maharashtra government, however, is planning to stop flights between Delhi and Mumbai to prevent the virus from having an easy landing in the megapolis. Since the virus cares two hoots about the mode of conveyance as long as it gets to travel, train services between the two cities may also be halted. In the last 24 hours, ending Friday morning, Delhi recorded 7,500 new cases of coronavirus.

Delhi also recorded its coldest winter morning in November in 14 years, with the mercury dipping to 7.5 degrees Celsius. Low temperatures, we are told, are the second-best thing that the virus prefers. The first, of course, is people without masks.

What is that the virus doesn’t like? There are many, but top of the list is the vaccine. You may say the vaccine isn’t out yet so then why should the virus care? Because the vaccine is so close to being out that the price has been spillled out. Serum Institute of India's CEO Adar Poonawalla has said the Oxford vaccine will be sold at a maximum of Rs 1,000 for two necessary doses. The coronavirus vaccine is so close to being out that the price is out. (Photo: Reuters)

Ab jab tak dawai nahi, tab tak dhilayi nahi. Remember, our cities are polluted and the temperatures are dropping. Both conditions favour the virus and work against us. In Delhi, experts have advised Congress president Sonia Gandhi to move out of Delhi for some time because she suffers from a chronic chest infection. Sonia could soon be moving to Goa or Chennai for some fresh air on the advice of experts.

The Securities and Exchange Board of India (SEBI), on the other hand, has advised Sahara Group owner Subrata Roy to pay Rs 62,600 crore or move into jail. Actually, SEBI hasn't directly told anything to Roy, it has instead, petitioned the Supreme Court that either Roy pays or his parole be ended.

Eight years ago, that is in 2012, the man who also identifies himself with his company name as Sahara Shri, was asked to pay Rs 25,700 crore. Since he did not pay, the amount has risen.

While Mallya and Modi came from business families, Subrata built his empire from scratch with fraud and a Lambretta scooter in UP’s Gorakhpur. Subrata Roy doesn’t acknowledge the contribution that the fraud made in his rise, but he accords the scooter a place of pride in his life. The scooter now doesn’t have to carry anyone on its seats. It instead finds itself parked in a glass cubicle at Sahara’s headquarters Sahara Bhawan in Lucknow’s Aliganj area. 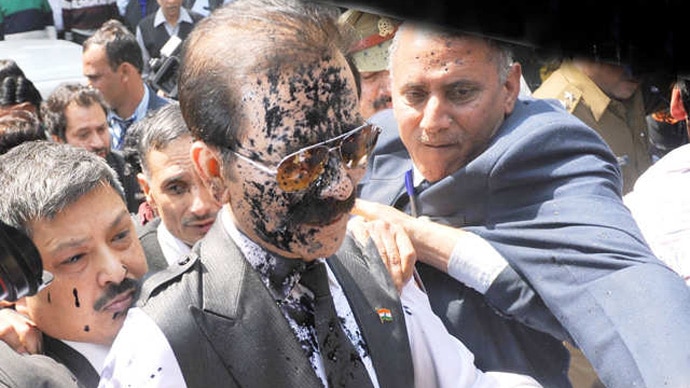 A person had thrown ink on Subrata Roy during one of his court hearings. (Photo: PTI)

We do not know if the scooter likes this life of luxury because the real meaning of a scooter’s life would be to be on the roads. Some day, if the scooter could write its autobiography, like the pencil and coin autobiographies we were made to write in schools, we may know the truth.

For now, the truth we know is that Subrata Roy used to sell salted snacks on the scooter. He wanted to take up a job but then the sudden death of his father forced him to stay in the business. It was on the scooter that Subrata reached out to people to invest in his chit fund scheme.

He went on to build a Sahara City, while his investors lost their life’s savings. Would all of this have been possible had he not had the Lambretta scooter? Since we do not know the answer to that question, we would just say that life is all about ifs and buts.

Subrata Roy will have to go to jail if he doesn’t pay SEBI Rs 62,600 crore. But he can always seek relief from courts. This reminds us that if Akshay Kumar wins a defamation case, he could end up adding Rs 500 crore to his fortune.

Actually, Akshay has filed a case against YouTuber Rashid Siddiqui for dragging his name in the Sushant Singh Rajput death case. All Bollywood names, it seems, have been dragged into the death case, including why Bollywood is called by that name.

Anyway, Siddiqui was slapped with the defamation case after he claimed that Akshay was unhappy with Sushant getting big films like MS Dhoni: The Untold Story (2016). Siddiqui also alleged that Akshay had "secret meetings" with Aditya Thackeray and the Mumbai Police. How does Siddiqui know? This is precisely what he could be asked in the court.

Defamation cases are always about crores running into hundreds. It is difficult to quote a price to someone’s fame or reputation. So the price for defamation must be prohibitive.

Calling a thief a thief is not defamation as long as you can prove that the person you are accusing is indeed a thief. And your proof doesn’t matter if it can’t stand in court. Oxford dictionary defines defamation as ‘the act of damaging somebody’s reputation by saying or writing bad or false things about them’. So, false is the operative word here but it is defamation which is the Word Of The Day here.

Most people know that the person they are suing can’t pay the hundreds of crores demanded in damages, so they settle for apologies instead. Perhaps the only idea is to prove the accuser wrong.

The YouTuber in question apparently made Rs 15 lakh in about four months and saw his subscribers grow from two lakh to three lakh. But Kumar is demanding crores.

Prime Minister Narendra Modi, meanwhile, is patting the backs of the security forces, who thwarted a major terror attack in Jammu’s Nagrota on November 19. Forces say the four terrorists killed in the encounter were planning an attack on the anniversary of 26/11 Mumbai terror attacks. 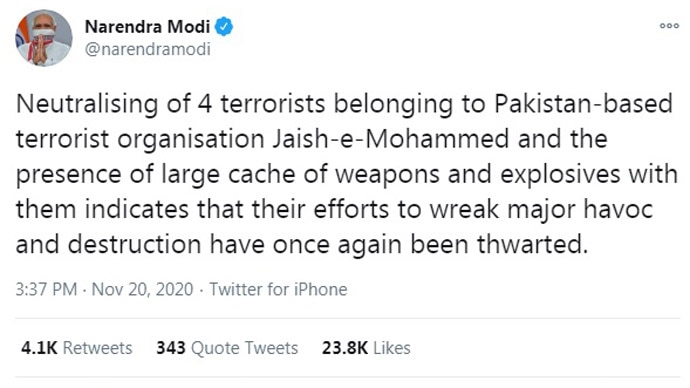 Those who indulge in terrorism will have to pay a price, the PM has said. But Netflix has said that for two days you won’t have to pay a penny to watch any show or movie you like on the OTT platform. The Streamfest will be on from December 5 to December 6 in India. If you don’t want to buy a Netflix subscription and still got something to watch, drop all your engagements for December 5 and 6.

If you have a subscription, use it to watch Bad Boy Billionaires or the newest season of Crown, or whatever else you may have planned to watch.

Also read: Why Love Jihad bill will become a tool to harass Muslims

#Coronavirus in delhi, #Akshay kumar, #Ahmedabad lockdown, #Coronavirusvaccine
The views and opinions expressed in this article are those of the authors and do not necessarily reflect the official policy or position of DailyO.in or the India Today Group. The writers are solely responsible for any claims arising out of the contents of this article.