Famous eateries in the national capital have been found hoarding hundreds of oxygen concentrators and selling them in black at exorbitant rates.

The week that went by started with some ray of hope in terms of a small dip in Covid cases. This was soon quashed as the cases and deaths set new records with each passing day. Yet another day and yet another new record in India with 3,915 Covid-related deaths and over 4.14 lakh cases in the 24 hours ending Friday morning. First, gangster Chhota Rajan, who had tested positive for Covid and brought in to AIIMS Delhi, is still alive. Why should that be news? Well, because news of Rajan's death spread like wildfire Friday afternoon, only to be refuted later by AIIMS.

Now, to some fresh Covid horror.

As if the deaths caused by respiratory distress was not enough, Covid has now induced cases of ‘black fungus’ that is now on the rise in Delhi hospitals. In the past two days, six patients have been admitted to Sir Ganga Ram Hospital — one of the largest and most renowned super-speciality hospitals in the capital — for treating this infection. Known as mucormycosis, this fungal infection begins with nose obstruction, swelling in the eyes or cheeks and black crusts in the nose, and can be lethal. Last year, it caused high mortality, with many patients suffering from the loss of eyesight and the removal of the nose and the jaw bone.

Experts say that this infection is common in patients who have recovered from Covid-19 but have comorbidities like diabetes, kidney and heart diseases or cancer.

So what does mucormycosis mean? Our Word of the Day comes from two words —Mucorales and mycosis. Mucorales is a kind of saprophytic (living and feeding on dead and decaying organisms) fungi, and mycosis is any infectious fungal disease.

Mucormycosis finds its first known usage in the early 20th century by American doctor Dr Thomas Lathrop Stedman (1853–1938) who was also the editor of The Medical Record journal.

In case you fall in the mucormycosis-vulnerable bracket, watch out for symptoms and immediately report to your doctor to start the antifungal therapy as early as possible. Do not self-medicate.

Well, you know better than to self-medicate, but who will tell these nine persons from Chhattisgarh's Bilaspur district who overdosed on homoeopathic medicine as a substitute for liquor?

The medicine, we are told, had 91 per cent alcohol content. Our hearts go to their families, who performed their last rites assuming that they succumbed to Covid and unaware of their covidiotic behaviour. Whatever medication you're on, just make sure that it comes from a qualified and certified practitioner.

After Delhi, Bengal CM has now alleged that Centre is diverting the oxygen to other states, while her state needs it more.  In her letter to the PM, Didi has demanded 550MT of medical oxygen per day, as opposed to the 308 MT it has been getting per day. She also reminded the Centre that Bengal produces 560 MT of medical oxygen in a day. 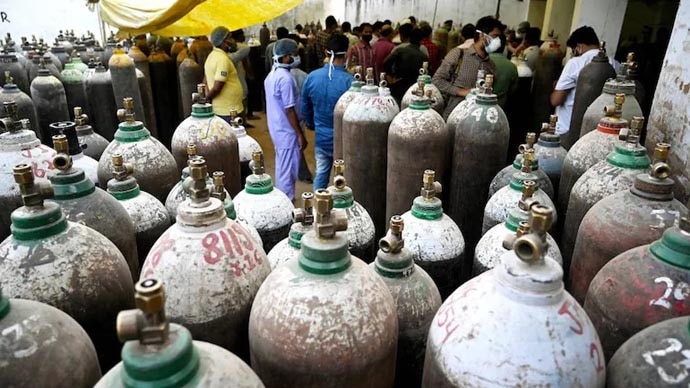 Meanwhile, the Supreme Court today directed the Centre to ensure a daily supply of 700 MT of medical oxygen to Delhi. The apex court has warned of passing coercive orders against the government if the Centre fails to comply with the directive.

The politics of oxygen.

While the to and fro between the courts and governments, Centre and states are on, Delhi Police is braving the heat and Covid to bust oxygen-hoarding rackets in the city.

Earlier today, nine concentrators were seized after a raid at Town Hall Restaurant and Bar at Lodhi Colony and almost a hundred oxygen concentrators were recovered from another eatery. The name of the other eatery will come as shock to the Delhiites — Khan Chacha outlet in the upscale Khan Market area.

This came in after videos of queues outside Khan Chacha. While that is not surprising, as in better days people used to throng Khan Chacha for the delicious kebabs, this time it was for oxygen concentrators that were being sold for over Rs 70,000 each. Yesterday, cops recovered 419 concentrators hoarded at Nege Ju Restaurant and Bar, also in Lodhi Colony. Navneet Kalra: From a black-suited businessman to a black marketer of oxygen. (Photo: Twitter/@navneetkalra)

There is another common link to all these hoardings. A man called Navneet Kalra, who owns these outlets and is an alleged black marketer of oxygen concentrators in the capital. Cops are still hunting for him. But sooner than later, he will be caught by the lambe haath of kanoon, we hope.

To profit out of others’ desperation and vulnerability is outright despicable.

From oxygen politics to the state that recently saw its political wheels turn.

MK Stalin is now the Chief Minister of Tamil Nadu after nearly a decade in political wilderness. He won it fair and square in the recent Assembly elections, with DMK bagging 133 seats in the 234-member Assembly. He took oath this morning along with 33 others. His son, Udhayanidhi Stalin is not on the first list of ministers contrary to the popular assumption. Who was on the first list, though, was Duraimurugan. He is considered to be a close confidant and right-hand man of both, father and son — former CM late M Karunanidhi and his son, CM MK Stalin. Such is the clout that Duraimurugan wields in DMK that he has direct access to the DMK patriarch’s family and some family members are even said to be cautiously deferential to him. Duraimurugan was said to be M Karunanidhi’s Man Friday and is said to be equally close to CM MK Stalin. (Photo: Facebook/ @duraimurugankpd)

However, he happened to be a part of one of the worst days TN Assembly ever saw. There are allegations, but they remain that. Allegations.

March 25, 1989, is widely considered to be the lowest point in the history of the state’s Legislative Assembly. As then CM Karunanidhi rose to present the State Budget, Leader of Opposition (first woman in the state to occupy that post) Jayalalithaa sought to move a Breach of Privilege motion against him accusing him of tapping her phones and allowing the police to act in a high-handed manner against her.

The scuffle started, and before one could realise, mikes were ripped out, paperweights and bundles of paper were flung from both sides. In the melee, as Jayalalithaa was making her way out of the House, some DMK members hit her on the head and then (and now) Minister Duraimurugan reportedly pulled her saree, tearing it. Dishevelled and physically assaulted, Jayalalithaa swore to come back to the House as the Chief Minister. And she did. Black day in TN politics: A weeping Jayalalithaa shows the spot on her head where DMK members allegedly hit her on March 25, 1989. (File photo: PTI)

We would never know whether it was deliberate or accidental.

What we know for sure, is that today is not Rabindra Jayanti. According to the Bengalis, the birth anniversary of Gurudev Rabindranath Tagore is celebrated on the 25th day of the Bengali month of Baisakh or Pochishe Baisakh. Then why are we talking about it today? Because he was born on May 7, 1861 — as per the Gregorian calendar. But 25th Baisakh rarely coincides with May 7 — the Gregorian calendar date. This year, it falls on May 9.

Whatever be his birthday, Gurudev is revered by the country and the world. And the best way to pay him a tribute is remembering him through his verses, reflecting his profound thoughts and prayer for his country. Where the mind is without fear and the head is held high... Into that heaven of freedom, my Father, let my country awake.

On this hopeful note, we say goodbye. We will see you on Monday with more.

#Rabindranath Tagore, #Duraimurugan, #MK Stalin, #Oxygen shortage
The views and opinions expressed in this article are those of the authors and do not necessarily reflect the official policy or position of DailyO.in or the India Today Group. The writers are solely responsible for any claims arising out of the contents of this article.