DailyOh! Night curfews and lockdowns return, to why Swapan Dasgupta is no longer an MP

Covid cases are rising across states. The Centre has said we ‘need to be prepared for the worst’.

Chianina is an Italian breed of cattle. Donetto was a bull of the Chianina breed. Donetto holds the record for being the biggest bull, weighing 1,740 kg. Some, however, put that figure to 1,780 kg. We were reminded of the biggest bull after Abhishek Bachchan announced The Big Bull would release on April 8. For those who can’t wait that long, the trailer would be out on March 19 and the wait would anyway continue till April 8. You also have the choice to not give a damn about a scam that happened in 1992 but you cannot not care about the virus of 2020, which began making people sick in China in 2019. The India-England T20 match today would be played in Narendra Modi Stadium without crowds because Covid cases are rising in parts of Gujarat and partial lockdowns are being reinforced. Also, if you saw the match, you know that spectators chose to see the match without masks even though the mask doesn’t cover the eye or prevent us from seeing. Cases have been rising in Madhya Pradesh and Maharashtra too, so partial lockdowns and night curfews are being reimposed. The Centre has said that surge in Maharashtra is the beginning of the second wave of Covid and that the state should step up contact tracing and vaccinations and prepare for the worst. 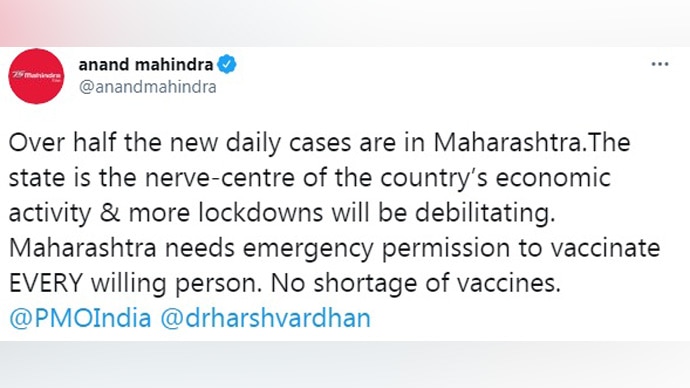 Gujarat minister Ishwarsinh Patel has tested positive for Covid days after taking the vaccine. Experts say Patel took just one dose of the vaccine and both Covishield and Covaxin work best when taken in two doses. Why hasn’t Patel taken the second dose? Because you can take the second dose only after 28 days of taking the first.

Do you know what happened in Gujarat Assembly yesterday? A Congress MLA was evicted from the House because the MLA, Vimal Chudasama, walked in wearing a T-shirt and speaker Rajendra Trivedi said ‘that’s not allowed’. Trivedi asked Chudasama to go home, change, and come back only in a kurta or coat saying “This is not a playground. You are not on a vacation. There is a protocol of uniform.” Talking of uniform, did you know that the T-shirt was once part of the uniform of US Navy?

Actually, T-shirts were to be worn as an undergarment beneath uniforms. The first avatar in which the T-shirt appeared was actually a union suit. If you have been in a jumpsuit, you know the problems of being in a union suit So, Long John modified union suits by making them in two parts - a top and a bottom. When these began being advertised, the US Navy allowed its men to wear them. Later, Navy men were mandated to wear it. Interestingly, both union suits and the Long John modification of it were meant to keep people warm. Most T-shirts are now cut out of cotton fabric because they are meant to keep the body and the look of the body cool.

OTPs are meant to keep our account access safe. Hackers, on the other hand, exist to remind us nothing is safe. In the latest, a new attack has been discovered where hackers are able to redirect SMSes bound for the victim’s phone number to their systems. So if OTPs made us feel safe, hackers are trying to tell us feelings are subject to change. What is an OTP? A one-time password. The best thing about OTP is that you do not have to remember it after using it. You still need to remember your password – the old one, and the one you change the old one into. Hackers have found a way to get to OTPs. (Photo: Reuters)

What is a password? A memorised secret. Oxford dictionary defines password, the Word Of The Day, as ‘a series of letters, numbers, etc. that you must type into a computer or computer system in order to be able to use it’. The dictionary doesn’t remind you password is something you must always remember. The man who first used passwords to protect user accounts was Fernando Corbato. Corbato died in 2019.

The use of the word password, however, is said to date back to 1798, and meant “a secret word appointed as a sign to distinguish friend from foe”. Beware of the foes trying to get access to your passwords.

BJP Rajya Sabha MP Swapan Dasgupta has given up his access to Rajya Sabha sessions. Swapan has been fielded as a BJP candidate from the Tarakeshwar assembly seat in Bengal but he resigned after TMC MP Mahua Moitra sought that Swapan be disqualified under 10th Schedule of the Constitution. What does the 10th Schedule say? "A nominated member of a House shall be disqualified for being a member of the House if he joins any political party after expiry of six months from the date on which he takes his seat after complying with the requirements of Article 99 or, as the case may be, Article 188." 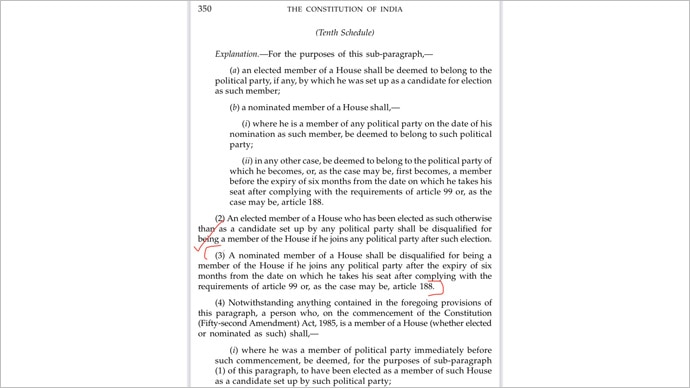 Someone who has resigned doesn’t qualify for disqualification so let’s turn focus to someone who seized his own housing society's digital video recorder while investigating the Mukesh Ambani bomb scare case. The Mumbai Police are now investigating if suspended Mumbai Police officer Sachin Vaze brought the car, which was used to plant explosives outside Ambani’s Antilia, to his society.

Scientists, meanwhile, are tracking a "restless" super-massive black hole. The black hole is being called restless because it is wandering in space at a speed of 4,810 kilometres per second. That is overspeeding but won’t attract a challan because black holes are in space and we issue them here on Earth. 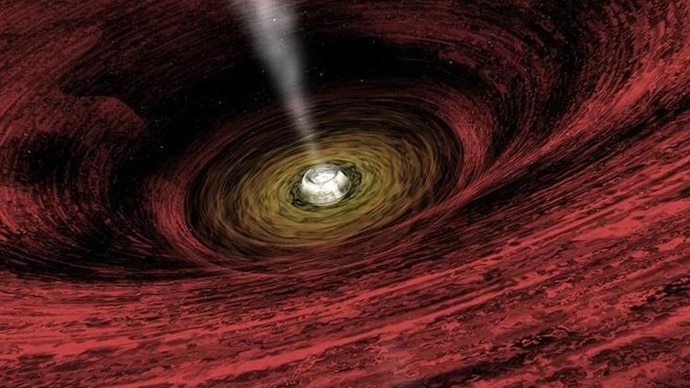 An artist's impression of a growing supermassive black hole located in the early Universe. (Photo: Reuters)

On Earth, you can’t wander and here and there unless you have valid visas. China has said it will issue visas to people, including people in India, if they take the Chinese vaccine against the Chinese virus. That is fair but no matter how far you go, you can’t get a Made in China vaccine in Aatmanirbhar Bharat.

If you still haven’t got your Made in India vaccine and so are wary of venturing out, you can sit at home and watch all Oscar-nominated movies. Our recommendation is you begin with Aaron Sorkin’s The Trial of The Chicago 7 (2020), which has received six nominations.

Meanwhile, gangster Chhota Rajan will remain in jail for 10 long years because Chhota Rajan has got badi saza in the 2013 case of bookie-turned-builder Ajay Gosalia’s attempted murder.

We would leave Rajan in jail for the next 10 years. We will leave you just for the day because we will be back tomorrow.

Also Read: When and how will the Covid-19 pandemic end?

#Bengal elections, #China, #Coronavirus vaccine, #Covid-19
The views and opinions expressed in this article are those of the authors and do not necessarily reflect the official policy or position of DailyO.in or the India Today Group. The writers are solely responsible for any claims arising out of the contents of this article.